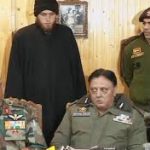 Jaibans Singh Majid Khan, a budding footballer of Anantnag, Kashmir, joined the terrorist outfit, Lashkar-e-Toiba (LeT), in beginning November this year, only to quit and surrender to security forces a week later due to an appeal by his family. The incident acted as a catalyst for more appeals by Kashmiri families to their rebellious wards to disown the cult of terrorism and … END_OF_DOCUMENT_TOKEN_TO_BE_REPLACED

Mehtab Karan Singh Mehbooba Mufti, chief minister of Jammu and Kashmir, in response to a written question by opposition leader Omar Abdullah is reported to have told the state legislative assembly that, “4587 missing youth of the state have crossed over to Pakistan Occupied Kashmir (POK). 474 youth have returned via Nepal up to ending December 2014 by taking advantage of the … END_OF_DOCUMENT_TOKEN_TO_BE_REPLACED

Simrit Kahlon Some one hundred and fifty odd people have set up a front called the POK Returned Families Rehabilitation Forum in the Kashmir valley. The constituents of the forum are such erstwhile Pakistan Occupied Kashmir (POK) based Kashmiri militants who have returned to the valley with large families. The method of return is by and large illegal; most of these people … END_OF_DOCUMENT_TOKEN_TO_BE_REPLACED

Jaibans Singh Human beings have an abiding proclivity to forget adversity the moment the situation takes a turn for the better while overlooking lessons from the difficult times gone by. Something like this seems to be happening in the trouble torn state of Jammu and Kashmir. For many decades, living in the shadow of the gun and being face to face with death and destruction … END_OF_DOCUMENT_TOKEN_TO_BE_REPLACED