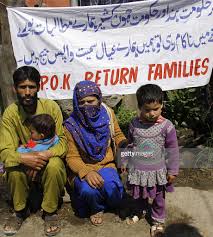 Mehbooba Mufti, chief minister of Jammu and Kashmir, in response to a written question by opposition leader Omar Abdullah is reported to have told the state legislative assembly that, “4587 missing youth of the state have crossed over to Pakistan Occupied Kashmir (POK). 474 youth have returned via Nepal up to ending December 2014 by taking advantage of the rehabilitation policy announced by previous NC-Congress government for them.” The government further informed that 15 youth have returned via Nepal from January 2015 till date, thus taking the total to 489.

Omar Abdullah put the surrender and rehabilitation policy of the state in place in 2010. So what prompted him to ask a question whose answer he already knew? It looks as if he wanted to highlight the inability of the Mufti led government in taking forward the agenda. It was essentially a political move.

Omar Abdullah should have taken into consideration the fact that the concept of surrender and rehabilitation had been in place much before he had drawn out the policy. The first lot of surrendered militants were the “Ikhwanis,” way back in early 1990’s; they are popularly represented by Kuka Parry who even stood for elections and was later killed in a terrorist attack. It is well known that the Ikhwanis went to the extent of fighting against the terrorists in concert with the security forces.

The PDP-Congress coalition government also had in place a surrender and rehabilitation policy under which many militants laid down arms. These early policies were successful to an extent because they set out achievable objectives.

Omar Abdullah should admit that in his time also the new policy did not give were very good results. At best only one in ten of the identified militants managed to return over so many years.

Instead of politicising the issue, what needs to be accepted is that the process is inherently flawed and needs to be modified if results are desired.

The policy looked for cooperation from Pakistan when it was well known that such cooperation would not be forthcoming. The point stands validated over the years.

The government had selected four entry points, Poonch-Rawalakote, Uri-Muzaffarabad, Wagah in Punjab and Indira Gandhi International Airport, New Delhi, from where the misguided youth, cleared by various intelligence agencies, could enter the Nation. Not one person has entered India through these approved entry points; instead, the entire influx has taken place from unauthorised entry points mainly along the Indo-Nepal border and that too without proper documentation. Those who have returned have come back with large families that has not been catered for at all.

Credible intelligence inputs have pointed towards attempts by terror outfits, particularly Hizbul Mujahideen (HM), to exploit the system to refuel terrorism in the state. HM and other terrorist outfits have not been able to exploit this loop hole because the number of people coming in is less, if the numbers increase then the initiative is likely to become a big security headache.

There are already reported incidents of rehabilitated former militants going back into the fold of terror. When this happens, the entire counter terrorism effort gets jeopardised.

Those who have crossed back with families have got together to set up a front called the POK Returned Families Rehabilitation Forum. The aim of this forum is to pressurise the government into providing to “rehabilitated militants” a variety of sops including jobs, financial aid and free accommodation. The onus of meeting their daily living requirements, which are by no means frugal, is being laid at the door of the government just because the latter has supposedly invited them back to their homeland.

Jammu and Kashmir is already grappling widespread unemployment more so among the educated youth. Training the educated unemployed youth and providing them with gainful employment is something the government is finding increasingly difficult to cope with. In such a milieu, how much right do the returning militants have over the limited resources of the State?

The policy has, thus, failed because its parameters were not achievable.  However, even now, not much has been lost; better results can be achieved by modifying the policy and taking a step by step approach.

It would be best for the government to make the Nepal entry legal since it seems to be the only method by which those stuck in POK can get back to India.

Legal options of getting back the misguided persons also need to be identified. This should be done on the premise that Pakistan is not likely to relent, therefore, international human rights bodies and organizations like the United Nations need to be approached to intervene and assist in getting the persons back. The pilot project should be only of a few people, if success is achieved than a bigger project can be put in place.

The aspect of rehabilitation also needs to be revised. Those who have surrendered should be subject to the due process of law before being re-inducted into society. They need to be guided towards integration through psychological, economic and social assistance.

The aspect of the large families that the militants are getting in toe also needs to be addressed. It is leading to social as well as law and order issues. The government needs to find a practical solution to this challenge and formalise the same.

The government also needs to ensure that the present generation of young boys and girls are not left susceptible to indoctrination by the terror mongers across the border. This is presently critical in view of the reports being received about enhanced attempts to increase local recruitment for terrorism in order to keep the movement alive.

The issue of surrender and rehabilitation is complex; simplistic solutions offered by the government are more politically motivated than pragmatic. It would be best to set politics aside and see what can be done practically.