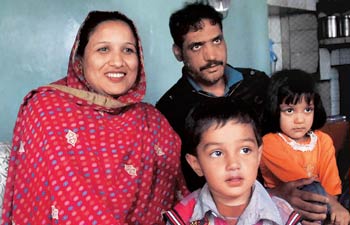 Some one hundred and fifty odd people have set up a front called the POK Returned Families Rehabilitation Forum in the Kashmir valley. The constituents of the forum are such erstwhile Pakistan Occupied Kashmir (POK) based Kashmiri militants who have returned to the valley with large families. The method of return is by and large illegal; most of these people have circumvented the entry points selected for their legitimate return and chosen to follow the circuitous and deeply suspicious route that comes via

Nepal. Now, the forum is seeking regularisation of their return under the ambit of the surrender and rehabilitation policy of the government of Jammu and Kashmir. The second avowed aim of this forum is to pressurise the government of Jammu and Kashmir to provide to them a variety of sops including jobs, financial aid and free accommodation. The onus of meeting their daily living requirements, which are by no means frugal, is being laid at the door of the government just because the latter has supposedly invited them to return to their homelands.

At the outset of any debate on the subject a fact that needs due consideration is that when these boys had decided to establish familial liaisons in an alien land they were no doubt convinced about settling and putting down roots over there. So if they have now decided to return, it is obviously because they see better prospects for their families and themselves in an economically vibrant India than in a stagnant Pakistan. As such, the move back to India is purely a pragmatic decision driven by economic and social considerations; the idealistic hue is being falsely imbued.

Rehabilitation policies whenever and wherever they are framed are normally the result of political manoeuvring; they rarely take into count procedural nitty-gritty’s and exigencies. While politics state intention, administration needs to follow procedure. In this particular case, politically the rehabilitation policy only provided an option to the misguided boys who had left their homes in a state of delusion to return provided there was no record of criminal activity being attributed to them. This would naturally entail verification of antecedents of those who returned which is a time consuming process. Moreover, if there ever an invitation as is being made out, it was limited to the boys who had left and not extended to the liaisons they had formed while living in POK and any families that they now have. For one, legalising the stay of their wives from Pakistan and children who had been born in Pakistan understandably requires additional procedures and consequently more time.

Under such circumstances one wonder as to why these prodigals should be given any preferential treatment over the millions languishing in our own country? The state of Jammu and Kashmir is at the moment grappling with multiple problems. The most pressing amongst these is the creation of employment for a largely semi-skilled and unskilled work force. Training the ones that are already there in the state and subsequently providing them with employment is something the government is finding increasingly difficult to keep up with, going by the lengths that it is going to woo the private sector to set up enterprises in the state. In such a milieu, how much right do these men have over the limited resources of the State?

The returnees, for want of a better term, are demanding financial aid for setting up businesses as also for initial sustenance. Now that they have returned back into the back into the family fold the onus of supporting them in their times of hardship falls on their families and not the government. After all that is what families and communities are for. In fact, these very voices that are exhorting the government to ameliorate the conditions of these boys might be better employed at mobilising community based support for them. Ultimately, rehabilitation must be within the community and not on the foundation of aid or grants from the government.

The tenets of natural justice also demand that if the state government indeed must look into rehabilitation of any individuals it cannot ignore the plight of the Kashmiri Pundits. What moral ground can the government claim if it has as yet done nothing to return to the Pundits what is rightfully theirs and is instead looking to rehabilitating the perpetrators of violence? Would it not be a travesty of all claims of fair and good governance, not to speak justice?

Most recently the forum referred to above has proceeded on a hunger strike to attract attention towards its demands. In this drive of theirs they are also making good use of the local media. Strangely, there are voices in the region that are actually espousing their cause, thereby defying all the tenets of natural justice and politico-administrative ethics. While it is true that those who have returned are our very own boys who were in all probability just misled and are thus fully deserving of our sympathy, understanding and help, yet in our moments of emotional generosity we must not ignore the dictates of pragmatic decision making. The turbulent past demands that these things be handled with the utmost care and caution. We cannot while distributing largesse in a state of political magnanimity, compromise with the hard won and as yet tenuous integrity and stability of the region. We have paid a high price to achieve this and must not squander it away on a political whim. Setting up of such pressure groups is a g dangerous trend which the government must nip in the bud before it gains unacceptable proportions. It would be best to put the rehabilitation policy in perspective before its misuse becomes a norm. To set right one issue the government cannot become a party in creating several wrong precedents.