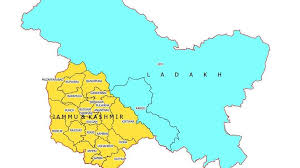 Thus, the parliamentary legislation of August, 05, for reorganisation of the state of Jammu and Kashmir into two Union Territories has been implemented. Also, the repressive provisions of Article 370 that have kept the state deprived of basic democratic rights have cease to be effective.

Across the nation, there was an environment of breathless anticipation with regard to this historic transformation. It was the favourite topic of discussion in congregations and was widely commented upon by the media. Social media was also abuzz with opinions and comments. The peaceful and seamless implementation of this dispensation has come as a big relief; it also gives hope of an era of peace and prosperity being ushered in.

The run up to the great day, from August, 05 when the legislation was passed to the present, has been quite disappointing for all those who were opposed to this historic correction of the Nation’s Constitutional status. Such elements, within the country and out of it, who did not wish to see this transformation come by, have not been able to galvanise the kind of public disruption and international support that they desperately desired. This is, by itself, a clear indication of the uprightness of the action being taken and its legal justification in the eyes of the nation and the international community.

In real terms, the change will have no negative impact on any region or segment of society in the state. On the other hand, it will correct many wrongs that were being perpetrated under the garb of the misconceived special status granted by Article 370. Those like the refugees who came from Pakistan during partition and chose to settle in J&K and those of the Valmiki Samaaj who have been in J&K for generations on end will get great relief on being given complete citizenship. The biggest beneficiaries will be the women who will get complete property rights hitherto-fore being denied to them. The list of benefits that will come by due to the new Constitutional order is long; the naysayers are completely devoid of any credible argument.

Most significantly, with this change coming by, a historic wrong that was sticking out as an aberration to the core principles of democracy and freedom enshrined in our Constitution, will be set right.

There is, however, little space for felicitations and back-slapping. Their very existence of the forces aligned against this very righteous action is now at stake, for which reason, they will leave no stone unturned in defeating this noble cause. These forces are strong, determined and vicious; they cannot be taken lightly.

The manner in which Pakistan is fluttering about is a true indication of the things to come. The country has lost out in all avenues that it leveraged to offset the move. It failed in its diplomatic effort, it failed in its efforts to instigate the locals into open revolt and it failed in engineering violence through its terrorist base in Kashmir. Yet, it is not ready to give up!

The unsuccessful attempt to smuggle weapons and warlike stores meant for Kashmir through Drones in Punjab and the recent attempt at large scale infiltration from terrorist launch pads in the Jura, Athmuqam and Kundalsahi in Pakistan Occupied Kashmir (POK) shows that Pakistan is not likely to relent from trying out all means to seize the initiative again.

The obtuse and graceless twitter attack on Indian political leadership, military leadership and media by the Inter Services Public Relations (ISPR), the propaganda wing of the Pakistan Army, post the failed infiltration attempt is another clear indication of the total frustration being felt by the military hierarchy of the country at its own impotence. These Pakistani Generals have inflated egos and a strong self view; they are unlikely to take things lying down.

It is very important to remain absolutely vigilant for repeated onslaughts by the enemy. The bottom line is that we need to remain ever vigilant for a massive military and security backlash.

For more than a millennium Kashmir has remained a vassal state of the Afghans, the Mughals and the Sikhs among others. The landlocked nature of the region and its small size precludes the option of surviving on its own. The merger with India provides to the region its first opportunity in millenniums for a free existence as part of a democratic dispensation. There is no reason for the region to not accept and enjoy such a gift of freedom and democracy. It is time for the Kashmiri people to realise that their aspiration for freedom can be met only by remaining aligned with the Indian Union. They, therefore, need to reject the falsehoods and perfidies of those who wish to control their very life and existence. The other options include succumbing to the suzerainty of Russia, China or Pakistan; in fact, proxy control by the United States or Britain is also a distinct possibility.

Every Indian is a part of the process designed to strengthen the integration of the country and uphold its democratic values that are respected the world over. To this extent, the people of the country stand firm with their fellow citizens in J&K and Ladakh. The challenges and the difficulties envisaged are, by no means, inhibiting the determination of the government and the people of India, including citizens of J&K to ensure the success of the initiative and usher a new era of peace, prosperity and absolute freedom.

(Jaibans Singh is a reputed geo-strategic expert, columnist and author)