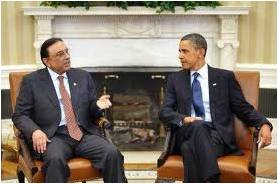 The US and Pakistan are now starting to look more like enemies than allies, threatening the global war against terrorism (GWOT) being played out in Afghanistan and parts of Pakistan against Taliban and Al-Qaida militants. Long plagued by frustration and mistrust, the relationship has plunged to its lowest level since the 9/11 attacks that had forced the two countries into a tight but awkward embrace over a decade ago. Having lost its patience with Pakistan, USA has taken the gloves off, to make its anger clear.

This is further corroborated by the Congress Research Service (CRS), an independent research wing of the US Congress in its latest report on Pakistan which states, “the two governments and, at a lower level, the diplomatic and security agencies within them seem at loggerheads after a grueling series of crises.” The “crises” referred to includes the shooting dead of two Pakistanis by a CIA operative, Bin Laden’s killing by a US team on the soil of Pakistan, suspension of bilateral security cooperation, a spike in Haqqani network attacks in Afghanistan, killing of two dozen Pakistani soldiers in a drone attack by US forces and a host of other incidents. For good measure that report has reflected that, “The United States has, of late, replaced India as the nation least favored by Pakistanis”, a significant development given the Pakistan-India relationship perpetually bordering on hatred.

The Pakistan-US partnership was forged by the former military dictator Musharraf, who pledged unconditional support to the US war in Afghanistan. The decision was not exactly popular at that time when it was taken and is now even more disliked. Yet, it is being upheld by the current government for its own, selfish reasons, since, without US help it would not be ruling Pakistan today. However, ten years down the road, the people of Pakistan have realised that this partnership has cost the country dearly. Today, their country is on the verge of economic collapse due to the constant shadow of war and violence over the last one decade. The military action in FATA, Balochistan and elsewhere has resulted in spreading terrorist attacks and violence throughout the country.

Despite the sentiments, the military presence cannot be denuded from the western borders that Pakistan shares with Afghanistan because a move in this direction would lead to an even more tumultuous situation than what is prevailing today. Thus, both the US and Pakistan have strong reasons to walk the relationship back from the brink. The US will definitely look for the continued presence of the Pakistan army in FATA. Just as important for the US is the support of the Pakistan government in the politics of Afghanistan where it is seen as the key to striking a peace deal with the Taliban. This is imperative for the US in case it wishes to withdraw from Afghanistan by 2014 in accordance to the master plan. Pakistan, on its part, can ill afford to become a sworn enemy at a time when it is struggling to contain its own insurgencies and get a grip of its stuttering economy.

The political situation of the two countries makes breaking of this impasse difficult, particularly with election in both countries almost around the corner. This, probably, is the reason why Hina Rabbani has been making many futile trips to the US in an attempt to placate the American and NATO leadership. She, very evidently, wants to start mending the fence right away knowing that the Pakistan People’s Party led government may not last its full term. “The longer Islamabad delays and dithers, the opinion in Washington is hardening,” commented Maleeha Lodhi, a former Pakistan Ambassador to the US.

The Pakistani army has traditionally maintained good relations with the US on whom it depends for weapon supplies. The army also has a heightened realisation of Pakistan’s national interest which is clearly at stake in this case. The public outrage against the Americans is known to all. Historically, Pakistan’s army has steered the relationship with the US and done well at that. However, fearing public backlash because of the rampant anti-American sentiment, the generals have conveniently tossed the NATO supply line issue to Pakistan’s weak and unpopular civilian government. The politicians, on their part are reluctant to do anything that could hurt their election prospects.

Though economically dependent on the US, Pakistan now feels the need to free itself of this curse. As per Ali Ashraf Khan, an author and political analyst, “we Pakistanis must try to stand on our own two feet, commanding some respect in the comity of nations.That means the future of US-Pakistani relations is rather bleak and the sooner we realise it and draw the consequences, the better it would be for Pakistan”. Ali Ashraf further sums it up by saying, “Our only survival lies in strengthening ties with China and Iran”.

While India has welcomed the US decision to withhold or cut military aid to Pakistan, there is nothing for the country to feel secure about. President Obama’s belief that the Al-Qaeda in Afghanistan has been substantially weakened and hence troops can be withdrawn is not shared by his own former military commander, General David Patraeus, and many others in India. Exit of the NATO forces from Afghanistan will give terrorists of all hues far greater freedom of movement and action wherever they want to. It will become even more necessary for Pakistan to maintain at present levels, if not enhance, military presence on its western front. On the Line of control and borders that India shares with Pakistan  there will be more a hightened threat of  influx of terrorism than any threat of a conventional face off. India will have to be all the more guarded, not only in Jammu and Kashmir and the rest of the country. New Delhi must brace up for an eventful two years ahead.