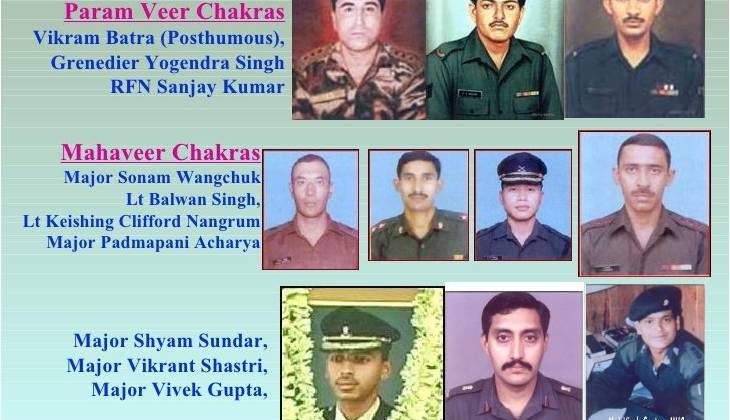 “Do not lament the death of a warrior in battlefield, they are honoured in Heaven”

The fifth round of conflict between India and Pakistan was fought in the heights of Kargil. Code named Operation Vijay, it lasted for 83 days from 3 May 1999 to 26 July 1999. The short and intense war ended with a decisive victory for India. When a unilateral ceasefire was declared by the Indian Prime Minister Atal Bihari Vajpayee, there was actually no enemy left to fight against. Those who had intruded and occupied the heights were mostly killed while the remaining  few set out on a difficult journey back home where they faced ignominy and humiliation.  Prime Minister Vajpayee  publicly admired the valour and determination of Indian Armed Forces and declared Operation Vijay a glorious victory as Line of Control ( LOC) had been restored.

The story of Kargil is one of deceit and treachery by one person, General Pervez Musharraf, then COAS of the Pakistan Army. To satisfy his personal ego and ambition he launched Operation Koh Paima (as he named the Kargil intrusion) without the knowledge of the then Prime Minister of Pakistan, Nawaz Sharif. It was executed by a few sycophant  Generals working under General Pervez Musharraf then commanding formations at Gilgit-Baltistan.

Operation Koh Paima was already underway when the Lahore declaration was being signed between the prime ministers of India and Pakistan as a consequence of the “Bus Diplomacy” initiated by PM Vajpayee  on 21 February 1999.

Detection of the intrusions was done by a few shepherds  and commanders on ground were informed about the presence of armed elements wearing Salwar-Kameez in the heights. The Pakistani plan was to pass off the intruders as Mujahedeen.  By beginning May it was clear that the intruders were well equipped trained soldiers of the Pakistan Army of a Division minus strength who had occupied three pockets from Mushkoh and Dras to Yaldar. They were entrenched and had artillery support.

On achieving clarity, the Indian army went in for the quick mobilisation and put in place two divisions for the attack to retrieve the positions. Thus started the Kargil War. There were initial setbacks when  a patrol led by Captain Saurabh Kalia, 4 JAT, was taken prisoner of war on 3 May and  later killed brutally.

The response of the Indian Army was ferocious. 8 SIKH recaptured Point 4256; Point 4440 and 16 Grenadiers captured Point 4480 by 16 May 1999. The government sanctioned the use of Indian Air force on 26 May which launched Operation Safed Sagar with Mirage 2000 aircraft that ruled the skies with devastating effect.  Five Regiments of 155mm Bofors guns reached the war zone and demolished  enemy fortifications . Tololing and Point 4590 were captured on 13 June;  Point 4760, Black Rock, 3 pimples were captured on 29 June. The battle for Tiger Hill was won after great effort and sacrifice.

Nawaz Sharif rushed to the USA to solicit assistance. The same day Muskoh and Dras area were recaptured and cleared. From 12 July to 18 July, withdrawal of Pakistan troops was permitted. Finally, Zulu Spur was taken on 24 July and sanctity of the LOC was restored. On 26 July 1999, Indian PM declared that Operation Vijay was over. The cost of victory was high, 22 officers, 21 JCOs and 452 brave soldiers of India made the supreme sacrifice. Pakistan lost almost 1200 soldiers.

While the complete saga of courage and devotion to duty cannot be recounted it is being exemplified here by taking note of a few such stories of valour. 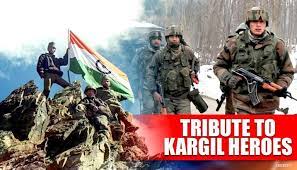 Known as Sher Shah in the Kargil War, Captain Vikram Batra, was commissioned into 13 Jammu Kashmir Rifles on 6 December 1997. He therefore had less than two years service when he went into war. His Battalion was tasked to regain Point 5140, for which he volunteered and chose “Dil Maange More” as the success password which later became folklore. His team captured the heavily defended feature. There was heavy fire coming from  the neighbouring height Point 4875, the commanding officer Lt. Col. YK Joshi who is now a Lieutenant General and commanding the elite Northern Command appreciated the need for its immediate capture.  He detailed another company for the attack but Captain Vikram Batra insisted on going in since he was already quite near to the objective. He convinced his commanding officer and went for the assault on Point 4875. He led the advance without care for his personal safety and was hit by a volley of Light Machine Gun fire. He crawled to the bunker profusely bleeding and lobbed a grenade thus silencing the enemy. The Indian Tricolour was soon placed on  Point 4875 and sanctity of the LOC was restored in the Dras sector. Point 4875 has been renamed “Batra Top.” His farewell words to his commanding officer were, “either l will come back after hoisting the Tricolour, or will come back wrapped in it, but l will come back for sure”

Lieutenant Manoj Pandey was commissioned into 1/11 Gorkha Rifles in 1998. He went to war with less than one year of service. He was instrumental in dislodging a firmly entrenched enemy in the Kalubar Hill and Jabuar Top  of the Yaldar Sector. Young Manoj led the assault personally under cover of darkness and got into hand to hand conflict with his Khukhri . The team cleared some parts but while heading for Jabuar Top it got day-lighted.  Due to heavy fire he sustained multiple bullet injuries  but continued  firing and motivating his assaulting troops. Finally, Kalubar and Jabuar were captured even as Lieutenant t Manoj Pandey died a hero.

Grenadier YS Yadav moved with his unit 18 Grenadiers to Kargil Dras sector in early June 1999. The unit was tasked to capture Tololing Top on 10 June 1999. The height of the feature was 16800 feet and it had near zero temp even in summer. The assault was launched on 12 June. Yogender Yadav was the leading scout of the Commando platoon that took a rear cliff approach and climbed with the help of slithering ropes. Once upon the enemy, he lobbed a grenade from the rear and killed all in the bunker. While neutralising the second position he was hit by several bullets but he kept crawling forward. His platoon was reduced to half but he did not give up. Finally he killed  four Pakistani soldiers with another grenade and the Tololing bastion came into Indian hands. This was the first Indian victory of the war. Grenadier Yogender Yadav was evacuated by Air to Army Hospital, Delhi almost dead, but he survived.  He is presently serving in Indian Army in the rank of Honorary Lieutenant .

Rifleman Sanjay Kumar, was enrolled into 13 Jammu Kashmir Rifles in 1996, The battalion under  Lt. Colonel (now Lt. General) Y K Joshi had moved to Muskoh sub sector in Dras. For the assault on Point 4875 (later Batra Top) Rifleman Sanjay Kumar along with his buddy were the leading scouts. The team came under heavy fire and Sanjay told his buddy to give covering fire while he charged at the post. He was hit on the shoulder and fell down but continued crawling forward and entered the enemy fortification where he killed the enemy in close combat. Despite bleeding profusely Rifleman Sanjay Kumar rushed to the next fortification which surprised the enemy who abandoned their position. Having finished his ammunition, he picked up an abandoned enemy machine gun and shot dead the fleeing soldiers. Thus Area Flat Top was captured and this helped in the capture of Point 4875.

There are so many soldiers who made supreme sacrifices or were severely wounded for the safety and integrity of the Nation. Ten infantry battalions were also awarded Battle Honour and  the title of ‘Bravest of the Brave.’  We salute our War heroes, especially those who did not come back. “Do not lament the death of a warrior in battlefield, they are honoured in Heaven.”