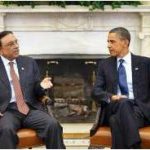 Prabhakar Gupta The US and Pakistan are now starting to look more like enemies than allies, threatening the global war against terrorism (GWOT) being played out in Afghanistan and parts of Pakistan against Taliban and Al-Qaida militants. Long plagued by frustration and mistrust, the relationship has plunged to its lowest level since the 9/11 attacks that had forced the two … END_OF_DOCUMENT_TOKEN_TO_BE_REPLACED