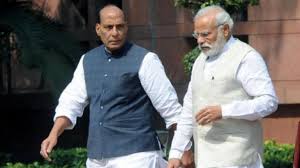 The Independence Day address by Prime Minister Narendra Modi from the ramparts of the Red Fort on 15 August, 20 will be given against the backdrop of some monumental events that have been witnessed in the year plus since formation of the NDA II Government in May 2019. These events have a significant impact on national security in the short as well as the long term. In meeting all these challenges the prime minister has led from the front and provided leadership with firm resolve and nerves of steel.

The Modi Government took a significant decision on 5th August 2019 that has a direct strategic impact on the country. On that day, the parliament passed requisite legislations to reorganise the frontier state of Jammu and  Kashmir into two Union Territories and abrogation of Article 370 and Article 35A  of the Indian Constitution. The decision was implemented on 31st October 2019.

Many political fronts had expressed apprehensions that the change would trigger huge security challenges both within the nation and out of it. It is to the credit of the people of the state that they wholeheartedly supported the Indian Government in its decision even as the Indian Army and other security forces handled the tense situation with great maturity and empathy. As a result the change has been accepted in a smooth manner and the state is now moving in a positive direction.

The challenge of foreign sponsored terrorism and cross border firing by the enemy has been well controlled by the Indian Army. In this year itself more than 140 terrorists have been killed which includes complete decimation of the terrorist leadership. Indian Army is responding to cease fire violations proactively even as an iron vigil is being maintained on the Line of Control. As a result, cross border infiltration of terrorists is at an all time low.   It is expected that the region will soon be free from the menace of terrorism even though Pakistan is unlikely to stop attempts to revive the same.

The Modi government has boldly responded to the standoff with China along the Line of Actual Control (LAC) by mobilising Indian Army and front line aircrafts to challenge the stubborn Chinese. Additional T-90 tanks have been inducted. Defence Minister has visited Russia for immediate supply of S-400 missile system, Sukoi 40 MK1/MIG 29 fighters and 45 light Tanks.

Indian troops boldly countered the Chinese at patrolling point 14 in Galwan valley and caused them many casualties. Under pressure, the Chinese army has withdrawn from most of the areas but is still holding on at Despang plains and a few areas north of Pangong Tso Lake. The Government is playing out a waiting game which, most strategic experts feel, is advantageous to India. Surely the Nation will win the ground as well as the perception battle with China and compel the belligerent nation to change its strategy of pressuring India for all times to come.

China and Pakistan, have created a strengthened partnership towards jointly threatening the frontiers of India. Nepal, a traditional friend of India is also under pressure from China. Indian Armed Forces, therefore, have been gearing up for a two and a half front war.

Increasing the defence hardware capacity of the nation was identified as the first priority to meet this challenge. The Modi Government has addressed this aspect on  a war footing. The first batch of  five Rafale aircraft landed at Ambala Indian Air Force base  on 29 July, 20. Another batch will arrive by October. The arrival of the Rafale aircrafts has given a much needed additional punch  to  the Indian Armed Forces. These game changers are more than a match for  J 16 , J17 & J 20 Chinese fighters. The fighters are already conducting sorties in the high altitude war zone against China.

The indigenous Tejas light combat aircraft received final operational clearance in February 2019. Hindustan Aeronautics has recently supplied 16 aircrafts to the Indian Air Force and will be enhancing production facilities to provide 16 aircrafts per year. The second Tejas squadron is under raising. The order for 123 Tejas is already in the pipeline.

Mid-2019 witnessed the arrival of ‘Chinook’ heavy lift helicopters and ‘Apache’ combat helicopters from the USA that are operating in Ladakh presently. In the present contract Boeing has to provide 15 Chinooks to India of which six have already arrived. The first batch of four AH-64 Apache helicopters, the most modern variant of the series, were received by India by the end of July 2019.  Four more Apache Helicopters came subsequently. The eight helicopters are already operational from the Pathankot Air Force Station and performing combat duty on frontiers with both China and Pakistan. Additionally, the Modi government has agreed to the Army’s long-pending demand for Apache AH-64E Guardian attack helicopters for its Strike Corps. So Apache will now operate both with the Army as well as the Air Force.

Indian artillery had not seen any induction of new equipment after the Bofors which came more than three decades back. A welcome addition into the Indian Artillery arsenal is the US M777 ultra-light howitzers. By Mid-2019 an Artillery Regiment was equipped with these state-of-the art Guns, 15 of which were imported from the US while three were produced in India by the Mahindra Group as a part of the Make in India initiative.

On the strategic front the Modi government has launched a bold initiative to reorganise the Indian Armed Forces in a manner that is more suitable for meeting present day defence and security challenges faced by the Nation.  The long awaited step of appointing a Chief of Defense Staff (CDS) has been taken with General Bipin Rawat designated the first CDS in December 2019. He will act as the principal advisor to the Defence Minister and also advice the prime Minister led nuclear command authority. Work is now underway to create joint commands and other organisational modifications.

There is a lot of work in the pipeline in hardware acquisition, road development and fine tuning of higher defense organisations. However, there is a long road ahead before India, as a nation, can say that it is truly a world class military power. There is much to be done and sustenance of momentum is most important.

(Jaibans Singh is a Geo-strategic analyst and writer)