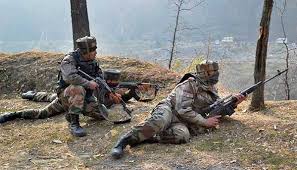 Amnesty International (AI) has recently released a controversial report on the Indian State of Jammu and Kashmir titled, “Denied: Failures in accountability for human rights violations by security force personnel in Jammu and Kashmir.”

Even a cursory reading of the report makes it clear that it is based on untruths cloaked in speculative data. The case briefs are distorted to highlight a particular line of thought that is biased against the security forces operating in the state to counter terrorism. The report is unduly influenced by some Human Rights (HR) organisations with dubious credentials.

The research team has not followed any established practice of research to arrive to the conclusions that it has laid down so emphatically. Sweeping statements made under the cloak of anonymity have been passed off as gospel truth. It is not surprising, therefore, that the team finished its “research’ in two flying visits to the Kashmir valley.

The report goes to great lengths to establish that the Indian Army was approached to give its inputs but it did not respond. The Udhampur based headquarters of the Army’s Northern Command has denied the assertion that it was approached by AI in February 2014 to provide information about the conduct of investigations and trials. In any case, there is nothing hidden about the procedures that the Indian Army follows in this regard. Data is freely available in the public domain.

The report is very critical of the Armed Forces Special Powers Act (AFSPA) which is applicable in Jammu and Kashmir to provide legal protection to the soldiers involved in counter-terrorism operations. It would be well advised to compare the provisions of AFSPA with the PATRIOT Act of the United States that has been enacted to strengthen Homeland Security. Even a brief study will reveal that the PATRIOT Act is far more stringent than the ASFSPA.

AI has, in the report, has made accusations of arbitrary disposal of prosecution sanction cases by the Indian Army to shield alleged perpetrators of HR violations from within its ranks. The accusation is far from the truth. Such cases are analysed in detail by Ministry of Defense after incorporating inputs of Police case diaries and proceedings of inquiries conducted by the Army. In the instance of twelve specific cases mentioned in the report, loopholes in the investigation procedure have, in fact, been adversely commented upon by the prosecution officers of the Police hierarchy.

The report has not acknowledged the action taken by the Armed Forces to punish those in its ranks who have been found guilty of HR violations even though this data is available in the public domain.

The data reflects that in the last 25 years, 1100 allegation of HR violations have been recorded in the state of Jammu and Kashmir. A bulk of these allegations have been recorded not by individuals but by Kashmir based HR organisations with vested interests. They have not been support by registration of a First Information Report (FIR). Of the 350 actual FIR’s registered, 100 cases have been litigated upon in various courts of law. The army has also taken suo-moto cognisance of as many as 100 cases. Punishment through army channels has invariably been timely and exemplary.

The Army, In fact, carries out a thorough inquiry into the allegations of HR violations by soldiers even when the same are made by dubious organisations and groups. In many cases those alleged to be missing have been found hale and hearty in their homes.

Data also indicates that FIR’s pertaining to HR violations do not constitute even 0.05 percent of the FIRs registered in the state over the last 25 years, the remainder, running in lakhs have been registered for various crimes and horrendous forms of violence by anti-social elements and terrorists.

The report has taken no cognisance whatsoever of the sterling development work that the Indian Army has done under its welfare scheme Operation Sadbhhavna or the assistance that is given by the soldiers to the people in times of natural calamities like floods and earthquakes.

The report is silent on the gross human rights violations being perpetrated on innocent people of the state by Pakistan sponsored terrorists. The terrible destruction of property, replacement of the traditional Sufi culture with fundamentalist religious principles and medieval behavior codes finds, at best, cursory mention in the report.  Interestingly, similar reports by AI on the situation in Afghanistan dwell strongly on terrorist inflicted HR violations.

The Kashmiri Pundits who are the biggest victims of terrorist violence and who have suffered gross HR violations have been totally sidelined in the report.

The report has wrongly defined the perpetrators of violence in Jammu and Kashmir as militants. By all international standards they are hard core terrorists who indulge in mindless killing of innocents to fructify the evil agendas of their masters in Pakistan.

Amnesty’s quoting of judicial judgments is also biased insofar that it has dwelled on such judgments that suit its preconceived argument and has ignored those (in a majority) that are in favour of protection to the armed forces of the country.

The report reinforces an existing strong perception of AI having a bias against non-western countries. It is for the better that the Government of India has deported Christine Mehta, the American researcher, who was part of the team that carried out this outrageous research. In view of the known prejudicial bias of the organisation it should not have been allowed to carry out the study in the first case.