On being commissioned from the Indian Military Academy, Lt. General Joshi joined 13 JAK Rifles on June 12, 1982. His unit was awarded the prestigious citation “Bravest of the Brave,” under his command during the Kargil war, apart from being awarded with two Param Vir Chakra, eight Vir Chakra and 14 Sena Medal. The iconic Captain Vikram Batra, PVC (Posthumous) and Rifleman (later Subedar) Sanjay Kumar, PVC, are from the unit. Lt. Gen Joshi too was awarded Vir Chakra.

Lt. General Joshi assumed command of the elite Northern Command on February 1, 2020. A few months into his assuming command, in March-April, 2020, China made India a target of its “wolf-warrior diplomacy” with simultaneous intrusions in Sikkim (Naku La) and the Eastern Ladakh sectors.

When the crisis was unfolding, it was universally accepted that Lt. General Joshi, being a highly decorated soldier who had served most of his command appointments in this area including command of the 14 Corps in Leh, was the best man to deal with it. This apart, he is an accomplished China expert having served as Defence Attache to China (2005-2008). He also speaks the Chinese language fluently.

The Indian response under Lt. General YK Joshi was swift and professional. While the Army was given full liberty to handle the situation on ground a “whole of Nation” strategy to meet the malevolent design was put in place. In a short period of time the army gained operational, psychological and moral ascendancy over the PLA and made it retract.

Post the face-off, despite being in a dominating position, India adopted a mature approach by opting to engage China in a military dialogue to resolve the situation. The objective to disengage and then transcend to de-escalation was very clearly elucidated by Lt. General YK Joshi.  The General described the situation as an ongoing  challenge wherein the Indian troops “acquitted themselves with distinction in defending the territorial integrity of the Nation and its sanctity.” Having said so, he emphasised that India will need to be prepared for a long haul. 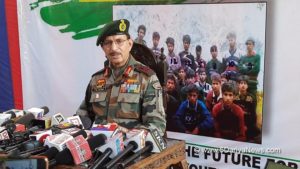 The General also made it very clear that the de-escalation process would be conducted on principles of mutual and equal security for both sides with the territorial integrity of the country remaining non-negotiable. “While we are investing sincerely in this ongoing endeavour to bring about peace along the border, we also remain prepared at all times for any eventuality,” he said. The General, thus, put to rest all speculations that were being raised on the subject.

The seriousness with which the Indian army, under his watch, applied the aforementioned policy was visible from the high degree of vigilance and operational actions of the Indian troops. Rapid build up was initiated which is continuing . Enhanced aerial and ground combat patrolling is being resorted to, even as commanders on both sides work towards a restoration of the status quo ante. Overall, the Northern Command under Lt. General Joshi, acquitted itself with distinction while defending the territorial integrity of the Nation.

On 24 February, 2021, the Director General’s of Military Operations (DGsMO) of India and Pakistan jointly recommitted to a ceasefire along the Line of Control (LOC) and International Border (IB) that was first declared in 2003. As Army Commander of Northern Command, Lt. General YK Joshi accepted the ceasefire but also made it clear that counter-terrorist operations of the Army in the hinterland will continue unhindered.  “Recently, the DGsMO of India and Pakistan have announced an agreement to uphold a ceasefire along the LOC from February 24 and 25 midnight. I want to assure that this ceasefire will have no bearing on the counter-terrorist operations and we will maintain our alertness,” he said. This statement left no doubt about the manner in which the Indian Army would react to provocation by violent forces operating at the behest of foreign powers within the Union Territory of J&K.

Under his watch the Army made a special effort to wean away the youth from the cult of terrorism with a strategy based on three prongs – prevent, protect and empower. All through his tenure he regularly called upon the Kashmiri youth to not fall prey to propaganda or come under the influence of the Pakistan sponsored Over Ground Workers (OGWs). It was because of his clear-cut policy of being firm in maintenance of law and order and humane in dealing with the locals that the level of terrorism in Kashmir witnessed a big drop.

COVID-19 was yet another challenge that the Army faced under the watch of Lt. General Joshi. The challenge compounded in the Northern sector since operational readiness and vigilance could not be compromised and yet the social distancing norms were required to be maintained. This apart, assistance to civilians was also necessary. All challenges were met by the Northern Command with élan.

The Army launched a massive awareness campaign to draw attention towards aspects of social distancing, hygiene and other essential lifestyle precautions that could reduce the spread of the deadly virus, the presence of the soldiers in remote areas greatly helped in this regard. The Army Command Hospital at  Udhampur was designated as a Corona testing facility. Within Srinagar, the Base Hospital  and Army medical teams provided assistance to government agencies. Army medical facilities with requisite staff were also set up to cater for both level one and level two patients. Due to these efforts, there was very less spread of the infection among the troops and all requirements of the civil administration were also catered for.

The Northern Command, under the leadership of Lt. General Yogesh Kumar Joshi, attained the next level of glory in its illustrious history. He will be remembered as a General who focussed upon maintaining the security and territorial integrity of the nation  and also looked after the welfare of his troops and the civilian population in this area of responsibility. Adieu General, J&K and the Northern Command will always remember you with respect and affection.

(Jaibans Singh  is a security analyst and columnist)