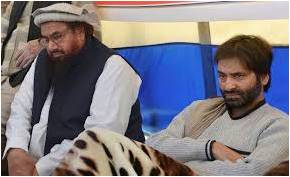 Yasin Malik, the separatist head of Jammu Kashmir Liberation Front, is a troubled man these days; torn between his family (wife and daughter, located at Pakistan and his dwindling political career in India he is going around making vague statements and courting arrest for no practical purpose whatsoever. He seems to be egged on by his few followers and some old friends in the media who write a few good words for him and give to him a false feeling of being in the centre of things.

In February, 2013, Malik went to Pakistan to spend some time with his family; instead of restricting himself to the most important family reunion, he chose to sit down for a fast to protest the execution of the terrorist, Afsal Guru, by the Indian authorities. On the podium he was seen in the company of Hafiz Saeed, a most wanted criminal who has masterminded the 26/11 Mumbai attack and is wanted in India. Very naturally, Malik’s anti-national activities in Pakistan raised the hackles of the people of India and demands for his arrest gained momentum.

When he got back sometime in March, there was a crowd waiting for him at the airport. Most countries in the world would have arrested him but, India being India, Police protection was made available for him at the airport. He even had the gumption of making a statement to the waiting irate crowd and media. “I neither invited him (Hafiz Saeed) nor was I organising the protest rally. I was an invitee myself,” he said. What other crime could you have possibly committed against India while in Pakistan on an Indian passport Mr Malik?

It seems that while in Pakistan he was chastised by his associates amongst the ISI and the militants for not creating enough mayhem in India on the execution of Afsal Guru. Ever since he has got back from Pakistan he has been harping on the Afsal Guru tune only. He made a big show of taking permission to hold a fast at Jantar Mantar in New Delhi On May, 03 and May, 04, knowing full well that permission would not be granted. When the Delhi Police took him into preventive custody for his own safety he came back wearing a neck support and insinuated manhandling by the Police. Is the Delhi Police so stupid as to man handle him and create a problem for itself? The entire drama was stage managed to gain some political brownie points and of course the attendant media hype, however obnoxious.

Separatists have this penchant for taking words that are being used for some movement anywhere in the world and applying it to the situation in Kashmir. By so doing they try to create a wholly unrealistic aura of the Kashmir issue having an international dimension. Some time back the word “demilitarisation” was in great favour. It was quite tedious to explain to the common man that deployment of troops in one’s own country is not militarisation, it is defence preparedness; so when there is no militarisation how can there be demilitarisation. In time when the word lost its utility it was replaced by “reconciliation”. Reconciliation is the act of two parties having a protracted dispute agreeing to forget the past and moving on. In Kashmir there is a problem of foreign sponsored terrorism, there is no issue between the people of the state and the nation. Quite evidently there is no scope of reconciliation between the terrorists and the people, hence, the concept by itself is not applicable. Nevertheless, the reconciliation drama went on for quite some time till the separatists got the new buzz word “civil society” that has become the current favourite.

Yasin Malik, true to the separatist penchant for buzz words, makes frequent references to “civil society” these days. By fasting at Jantar Mantar he wanted to, “to touch the conscience of Indian government and India’s civil society.” Civil society denotes a “third sector,” distinct from government and business. It covers non-governmental organizations, professional associations, religious groups, labour unions etc that enrich public participation in democracies by running advocacy campaigns on important issues. One has not heard of any “civil society’ advocating the separatist line of thought, not only in New Delhi, but in the whole of India. Yes there are a few maverick writers, lawyers, self proclaimed human rights activists etc who support the separatist cause to gain some media attention and maybe a few bucks on the side. These individuals do not fall in the definition of “civil society.” One, therefore, is left wondering as to which “civil society” Yasin Malik was trying to reach out to in New Delhi.

By Malik’s own admission even Pakistan, the most enduring ally of the separatists, has “cooled off” towards their so-called cause. This was quite evident by the muted reference to Kashmir by Pakistani political leadership across the board during the election campaign. Nawaz Sharif, the Prime Minister designate of Pakistan, in all his interviews after winning a resounding majority in the elections has hardly mentioned Kashmir.

The writing on the wall is quite clear; let alone “civil society”, the Indian government, the Pakistan government, the people of India and Pakistan and even the people of Kashmir for that matter are not interested in the separatist line of thought on Kashmir. In short, the separatists have become wholly irrelevant. The best that they can achieve is some rabble-raising that keeps some finances flowing. These have also been curtailed to quite an extent by their erstwhile supporters.

With the Delhi chapter being closed, Malik has now decided to do some rabble-raising by fasting in Kashmir from May, 23 to May, 24. One can only advise him to cease such brazen activities and divert his energy to something that can bring peace and solace to his people who are trying to come out of the shadow of one of the most debilitating terrorist campaigns in human history.