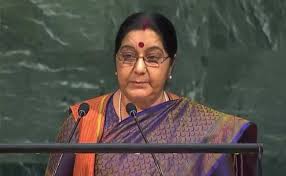 It has become a habit for Pakistan to come back from international forums, especially the United Nations General Assembly (UNGA), with egg on its face. This year, the shame has been even more pronounced for the country.

In the recently concluded session of the UNGA, Pakistan Prime Minister Shahid Khaqan Abbasi made his maiden address. This would, perhaps, be the only opportunity that he will get to address to the august assembly, considering his tenuous hold over the premiership.

So far as Pakistan is concerned, the person giving the speech may change but the script remains the same. This year was no different! Abbasi did nothing more than rave and rant against India as mandated by his master, General Qamar Bajwa, the chief of the Pakistan Army.

With regard to Jammu and Kashmir, he asked for implementation of the resolutions of the United Nations Security Council (UNSC) which mandate a plebiscite in the region. Carried away by his own rhetoric, he also asked for a setting up of an inquiry commission by the UN to “verify” the so-called human rights violations in the state.

While making these silly comments, Abbasi had not factored in the redoubtable Eenam Gambhir, first secretary with India’s permanent mission to the UN. A diplomat par excellence, Eenam has, on earlier occasions, torn to shreds such idiotic postures adopted by Pakistan in the United Nations.

During the right to reply session, Gambhir described Pakistan as “Terroristan.” “Terroristan is, in fact, a territory whose contribution to the globalisation of terror is unparalleled,” she said to a spell bound gathering. It may be remembered that last year Gambhir has said that the “ivy league of terror” is located in Pakistan. She rounded off by saying, “The polluter, in this case, is paying the price.”

India’s Minister for External Affairs, Sushma Swaraj, rendered a scintillating address to the UNGA that covered a wide range of issues, as behoves the leader of a big, respected world power like India. She also gave a short but stinging riposte to Pakistan.

“We (India) produced scholars, doctors, engineers. What have you (Pakistan) produced? You have produced terrorists,” were her “saying it all words” that left Pakistan red faced. Swaraj also reminded the beleaguered prime minister of Pakistan that his own political mentor and party chief, Nawaz Sharif, had changed the nomenclature of dialogue from “Composite Dialogue” to “Composite Bilateral Dialogue” to emphasise on the bilateral nature of talks that are held between Indian and Pakistan in accordance with the Shimla agreement.

India’s spirited and righteous response to Pakistan’s duplicitous statements flustered the country so much that Maleeha Lodhi, Pakistan’s permanent representative to the United Nations, made an embarrassing faux pas in her right to reply to the speech given by Sushma Swaraj.

She accused India of “crimes against humanity” and of carrying out a “campaign of brutality inside Kashmir” and to prove her point, she brandished a photo of a badly injured girl, ostensibly from Kashmir.

To her eternal embarrassment, the photo that she brandished so vigorously turned out to be that of a Palestinian girl taken by award-winning photographer Heidi Levine inside the Gaza strip in 2014.

Flag waving and stone pelting mostly happens in the Kashmir valley when Pakistan’s terror and disruption script for the region is jeopardised.

One instance that can be quoted in this regard  is the havoc that was created in February this year just because General Bipin Rawat, Chief of Army Staff of the Indian Army said that those attacking security forces during Counter Terrorist (CT) operations will be treated as “anti-nationals” and will face “tough action.”

The very fair warning given by the Army Chief was used as an opportunity by some elements in the valley, who work for inimical foreign powers, to whip up frenzy amongst the youngsters. As a result, some young misled boys took to the streets after congregational prayers to wave Pakistan and Islamic State flags and clash with the security forces.

There are many other instances when the killing of a terrorist by security forces invokes a call for a Bandh (shut down) by the Hurriyat followed by hoisting of Pakistani flags and violent activity.

The frenzy is whipped up by people who specialise in creating an environment of unmitigated rage through invocation of religious and wholly skewered nationalist sentiments.

The only people who had something to gain from the entire jamboree are the separatists. It provides to them an opportunity to prove their relevance to their masters sitting across the border.

Sadly, those who are affected adversely to the extent of losing their lives, are not even low level functionary of the Hurriyat and other separatist organisation. The separatist coffers tick even as families who lose their loved ones come to terms with their loss.

Those who are losing out are young boys, some in their teens. They have little understanding of the ideals for which they have given their life. They are quite unaware of the diabolic nature of the Pakistani agenda for Kashmir. Be that as it may, it would be difficult to describe them as innocent since they participate in an anti-national activity.

Is it worthwhile for the boys go around waving Pakistani flags on the streets of their beautiful land? Should they not be engaging in more gainful pursuits like building a career and a life for themselves rather than wearing face masks like common criminals and shouting anti-national slogans? What can Pakistan do for them when it is in doldrums itself? This is the time to look deeply into the aforementioned vital aspects,  introspect and go in for a course correction.