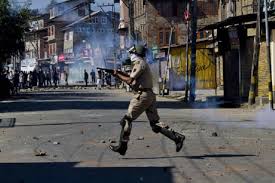 The Kashmir valley has been in the throes of violence for more than a month now. A vast array of suggestions and recommendations for diffusing the situation are flooding the media and the information domain. Many are relevant, but, an equal number are aligned with the party and ideology that the person belongs to. The plethora of divergent ideas is causing a lot of confusion.

It is time to carry out an honest and pragmatic reality check on Kashmir; to separate the wheat from the chaff and move towards a coherent, consolidated, coordinated and long term strategy to deal with this recurring problem.

It is being said that those who are agitating in Kashmir are the youth who were born in an environment of violence and have lived under the shadow of the gun. This is a misnomer!!

The agitators are mainly between the age of 12 to 16 years and at times even younger. They were born at the beginning of this millennium when a ceasefire between India and Pakistan came into effect, the Line of Control (LOC) fence was built and infiltration was contained.

The graph of terrorism and the number of terrorist operating in the Kashmir Valley has been declining steadily since then. From a few thousand at around 2000, it has been hovering at less than 200 since the last few years.

Decimation of foreign terrorists by the security forces has led to a perceptible decline in terrorism, terrorist atrocity and violence.

The boys who are spearheading the agitation, therefore, were born in a Kashmir that had emerged victorious in defeating the scourge of terrorism! It is not they, but their parents/elder brothers and families who lived through the terrible time when terrorists ruled the roost. Their elders helped the security forces, often at the risk of their own lives, to rid their beautiful land of foreign sponsored violence.

The boys who are agitating do not have a real idea of what foreign sponsored terrorism actually implies, they have not seen their parents stay awake at night in fear of “visitors” who would first ask for food and then the women of the house; who would also take away whatever little means of sustenance that were available with the family.

Those who achieved this herculean feat of decimating the cult of terrorism are not agitating or crying for the so-called Azadi (Freedom). They know exactly what Pakistan will do to their land should even a small window is allowed to open for it to intervene.

Being young and impressionable, the boys spearheading the current violence get a kick out of challenging authority. They are, however, too immature to give a thought to the disastrous consequences.

It is the duty of elders in Kashmir to explain this reality to the younger generation.

It is also being said that the government at the centre is not doing enough to diffuse the situation and that the prime minister is not coming up with an initiative.

The problem in Kashmir is localised, it involves only a few districts. There is an elected government in place. It is this state government and not the centre that should be handling the situation on ground. The centre can, at best, give whatever support is required and that is exactly what it is doing.

There was a lot of hue and cry about Prime Minister Modi not making a statement on the Kashmir issue. Now that he has made a few statements, there is a frenzied attempt by the opposition to deconstruct the same.

Our country simply lacks the political maturity to differentiate between politics and national interest. What the ruling party may say or do simply has to be criticised by the opposition. In a matter like Kashmir, such an approach projects the country as divided and gives incentive to anti-national elements, both domestic and foreign, to escalate their nefarious designs.

The negativity that has been generated after the statements made by the prime minister amply proves that the silence that he chose to maintain was a better option.

It is quite amazing to note that the army is being accused of being complicit in causing injuries to civilians in the course of the agitation; this when the army has no role whatsoever to play in what is going on.

The army has not been called out to quell the unrest, and as such, it is not on the streets. Further, the army does not have pellet guns which have become the biggest bone of contention and criticism. It is, in fact, suggesting that the pellet guns be replaced with less lethal options.

On ground, the army is quietly and efficiently ensuring that the LOC remains safe and Pakistan is not allowed to use the unrest to build on its depleting terrorist cadre. In this it is achieving brilliant success.

The injuries to civilians are being caused in the process of riot control which is the responsibility of the J&K Police and paramilitaries. These forces are not entering homes to fire pellet guns or shoot people. It is the people who are coming out in the street, attacking them and compelling them to use force to save themselves.

The fact that there are so few deaths and injuries despite the massive level of agitation and violence is indicative of the tremendous restraint being exercised by the police and paramilitary forces in the face of grave provocation and danger to their own life and limb.

No force in the world would ever exercise such patience and restraint and this is exactly what the disruptive elements are exploiting when they progressively escalate the level of violence.

The state government and the people of Kashmir should join hands to quell the disruption and the violence as fast as is possible and before it attains disastrous proportions. In this effort they have the support of not only the Government of India but each and every Indian citizen. But, only they can do what needs to be done.