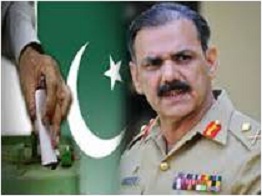 Pakistan is standing on the threshold of a historic transition; the process started with the Pakistan People’s Party (PPP) led government completing its full term and paving the way for a smooth general election by handing over power to a caretaker government and then entering the electoral fray like any other party. This became the first instance of this nature in the history of Pakistan.

What has followed is even more incredible; the fundamentalist and militant forces that hold great sway and power in Pakistan have left no stone unturned in attempting to scuttle the election process by resort to violence and intimidation. The entire Nation has risen as one to ensure that these forces do not succeed in their nefarious agenda. The end result has been terrible brutality by the fundamentalists in which many political leaders, workers and innocent people have lost their lives and an unimaginable amount of property and infrastructure has been destroyed.

This phenomenal loss has not reduced the spirit of the political parties; they have continued to campaign under extremely dangerous circumstances. The Election Commission of Pakistan and the interim government have demonstrated a unique determination to see the poll process through. The army has extended all support and as many as 70,000 army troops are expected to be deployed to ensure secure, free and fair polling. The Pakistan Army Chief has categorically stated that the election process will not be allowed to be hindered under any circumstances. The polling slated for May, 11, is now around the corner and the eyes of the whole world are on Pakistan to see if the final hurdle will be crossed. The way things are moving there is every reason to be optimistic.

Successful installation of a second elected government in Pakistan will be welcomed by the global community. If the new government can hold ground and be mature and fair in its dealings the country will find itself on a progressive path. It will be looked upon as a nation on the mend and international support will flow. The next five years may well witness a sea change in Pakistan.

India’s relation with Pakistan in the post election scenario is something that is on everyone’s mind. The matter has gained significance in the light of the unfortunate incidents of late. The death in custody of the Indian national, Sarabjit Singh, and the attack in a jail in Jammu by some miscreants on, Sanaullah, a Pakistani convicted for terrorist activities, have caused considerable tension between the two countries. The actual repercussions of these unfortunate incidents will come to the fore only when the elected government takes charge in Pakistan, as will the overall policy that the new dispensation will adopt with regard to its most important neighbour – India.

If one goes by the election manifestoes of the major political parties of Pakistan it becomes evident that building and maintaining relations with countries like the US, China, Russia, European Union and even Afghanistan is much higher up on their agenda than building bridges with India. In its election manifesto, the PPP has rooted for “pursuit of an honest and sincere dialogue for the resolution of all outstanding issues with India, including the core issue of Kashmir, the normalization of trade relations and the easing of travel restrictions.” The PML-N has covered India in a generic reference; it will, “seek resolution of differences by means of peaceful negotiations with the objective of establishing cordial and cooperative ties with all countries, especially those that are our neighbours.” The Imran Khan led PTI wants, “progressive detente with India centred around conflict resolution and cooperation.” Other parties have made only passing references, if any, to India.

There may be distinct lack of interest so far as India is concerned but Kashmir has found a special reference in all manifestoes. The PPP wishes to, “maintain full solidarity with and continued moral, political and diplomatic support of the Kashmiri people for realizing their legitimate aspirations.” PML-N wants resolution of the dispute, “in accordance with the provisions of the relevant UN resolutions and the 1999 Lahore Accord and in consonance with the aspirations of the people of the territory for their inherent right of self-determination.” The PTI goes a step further in describing, “resolution of the Kashmir issue as a core national interest.” What is, however, significant is that there is hardly a mention of Kashmir, or anti India rhetoric for that matter, in the election speeches of the senior leaders of the country. The big reason behind this could be a realisation that the people are now more interested in what is good for them rather than their “brethren” across the line of control.

Disinterest in a positive engagement with India and rigid positions so far as Kashmir is concerned does not give a positive indication about things moving for the better once the new government takes charge. A logical derivative of the foregoing would be that whosoever forms a government in Pakistan will keep Kashmir central to all policies and will follow the line dictated by the military and the militants. In short, the gains of a free and progressive Pakistan, in case they come by, will not be enjoyed by India.

With the US-NATO forces poised to de-induct from Afghanistan, Pakistan’s importance to the western world will diminish considerably. Due to its geographic proximity and vibrant economy India can do more for Pakistan that any other country has ever done. This would, therefore, be the right time for Pakistan to reach out to India, resolve all differences and embark on a mutually beneficial relationship. India on its part should welcome the strengthening of democracy in Pakistan and create an atmosphere for a positive engagement. At the same time, India needs to look at the negative indicators emanating from Pakistan at the moment and strengthen its vigil against a possible misadventure, especially in Kashmir.