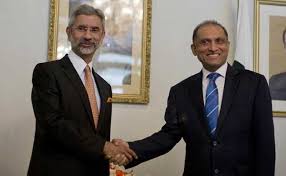 Over the last few months terrorists have been attempting to up the ante in Kashmir at the behest of their masters across the border. The security forces, however, have put paid to their plans by conduct of surgical counter-terrorist operations.

In a fierce encounter in Panzgom, South Kashmir on 07 April the security forces eliminated three terrorists. Earlier, a counter terrorist operation in the Putshai area of Lolab, Kupwara, North Kashmir, that lasted over many days and culminated on April, 27, witnessed the gunning down of four terrorists, their weapons were also recovered. In yet another significant operation on April, 7, security forces had gunned down two top terrorists of the Hizb-ul- Mujahedeen in Shopian, South Kashmir.

While the security forces continue to maintain pressure on terrorist activity in the Kashmir Valley, the diplomatic engagement with Pakistan does not seem to be gaining any momentum whatsoever.

The talks between foreign secretaries of India and Pakistan held in New Delhi on April, 27, on the sidelines of the Heart of Asia conference have left nothing but frustration in their wake.

The usual niceties of “frank and constructive discussion” with “all outstanding issues discussed” and “taking the relationship forward,” cause nothing but exasperation to such people who have no desire to waste their time on frivolity.

During the talks, India restated her righteous position by reiterating the need for Pakistan to act against terror group operating from its soil instead of being in “denial” about terrorism.

India’s foreign secretary, S Jaishankar, clearly conveyed that Pakistan cannot remain in denial about the impact of terrorism on the bilateral relationship between the two countries. Terrorist groups based in Pakistan and targeting India must not be allowed to operate with impunity, he said.

Jaishankar also emphasised need for early and visible progress on the Pathankot terrorist attack investigation as well as the Mumbai blasts case trial in Pakistan. He brought up the listing of JeM leader Masood Azhar in the UN 1267 Sanctions Committee.

Instead of addressing the core issue of proliferating terror in the region, Pakistan is choosing to stick to its well known postures like – Kashmir remains the core issue that requires a just solution; concern about India’s probe into the 2007 bombing of the Samjhauta Express; allegations of the involvement of India’s intelligence agency RAW in stoking fires of insurgency in Balochistan.

Foreign Secretary S Jaishankar firmly rebutted allegations of India’s involvement in Balochistan or other areas. In this context, he asked which spy agency would put their agent in the field with their own passport and without a visa.

Pakistan has made a huge diplomatic error in raising the issue of India’s involvement in stoking insurgency in Balochistan at this stage when its biggest holy cow, the Pakistan army, stands exposed as the main exploiter of the region.

It is said that from 2008 to 2015 Baluchistan has received as much as Pakistan Rupees 1200 Billion as aid from the federal government.  All six Pakistan Army personnel who have recently been sacked on charges of corruption had carried out their nefarious activities while being posted in the Frontier Corps at Balochistan. The Frontier Corps, an auxiliary force responsible for maintaining law and order in the trouble torn province. This sacking reinforces the common perception that Baluchistan is reeling under a corrupt administration. Under the circumstances, with what face does Pakistan blame India for stoking fires of insurgency in the restive province?

Pakistan is refusing to understand that by nurturing terrorist elements it is causing more harm to its own country than to India. Sadly, the country has shown no inclination over the years to heed the sage advice rendered to it by India to control its militant elements.

The writing on the wall is that Pakistan will relent only after it has exhausted itself or splintered into small little pieces. Any of the two options can happen not too far ahead in time.

India, in the meantime, would be well advised to cease giving this sage advice and instead turn inwards to meet and defeat whatever challenge is posed by Pakistan while following its chosen path. The objective should be to steer Pakistan to the point of exhaustion which is the only solution to the problem.

Terrorism in Kashmir, over the years, has been sustained by ISI mainly through terrorists of foreign origin with the local cadre playing a subservient role. Today, there is a situation where the number of foreign terrorist operating in the valley is less than forty percent of the total estimated strength of operative terrorists, which is estimated to be 180 to 230.

The Indian Army should now ensure that infiltration attempts from across the border lead to unacceptable casualties to the infiltrators. The dwindling strength of the foreign cadre, coupled with inability to infiltrate reinforcements will pose a big challenge to the ISI towards maintaining the desired threshold of terrorism and violence in the Kashmir valley.

Considerable success has already been achieved in counter terrorist and counter infiltration operations.   Now only the last push is required. Such a push, however, will require perseverance, sensitivity and above all patience since one wrong move can take the clock back by many notches.

The momentum of counter-infiltration and counter- terrorist operations should be maintained by security forces in the Kashmir Valley and in this they should get full support from the central as well as the state government.

Simultaneously, the government should proactively engage the people of Kashmir so as to wean them away from Pakistani propaganda. When India has righteousness on her side she is bound to succeed in such an initiative. It may take time but it will happen.