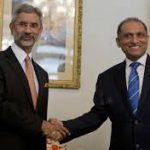 Jaibans Singh Over the last few months terrorists have been attempting to up the ante in Kashmir at the behest of their masters across the border. The security forces, however, have put paid to their plans by conduct of surgical counter-terrorist operations. In a fierce encounter in Panzgom, South Kashmir on 07 April the security forces eliminated three terrorists. Earlier, a … END_OF_DOCUMENT_TOKEN_TO_BE_REPLACED