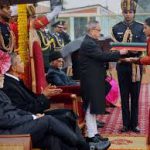 Jaibans Singh The country has just celebrated its 66th Republic Day. The ceremony is all about generating a feeling of nationalism. The President, as supreme commander, reviews the Armed Forces and gives the nation an assurance of their ability to defend the Nation. The forces, in turn, reiterate their loyalty to the elected government and their supreme commander. The most … END_OF_DOCUMENT_TOKEN_TO_BE_REPLACED