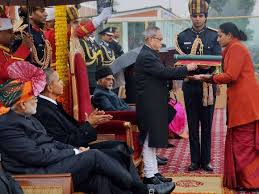 The country has just celebrated its 66th Republic Day. The ceremony is all about generating a feeling of nationalism. The President, as supreme commander, reviews the Armed Forces and gives the nation an assurance of their ability to defend the Nation. The forces, in turn, reiterate their loyalty to the elected government and their supreme commander.

The most emotional part is the honour that the grateful Nation bestows upon its gallant soldiers who have won laurels with their feats of bravery and, in some cases, have sacrificed their lives for the cause of the Nation. This year, President Pranab Mukherjee posthumously honoured Major Mukund Varadarajan and Naik Neeraj Kumar with the prestigious Ashok Chakra, the highest peacetime military award of the country. The award was accepted from the President by the widows of the two brave soldiers. These brave sons of India laid down their lives combating terrorists in separate incidents in the Kashmir Valley.

While the award of the Ashok Chakra to Major Mukund Varadarajan, AC (Posthumous) was announced on August, 15, 2014, the award for Naik Neeraj Kumar, AC (Posthumous) was announced on January, 25, 2015, along with other gallantry awards for 2014 that included three Kirti Chakra, nine Shaurya Charka and forty eight Sena Medal (Gallantry). Of these one Kirti Chakra, three Shaurya Chakra and 16 Sena Medal (Gallantry) are posthumous.

Apart from these brave martyrs there have been many soldiers in the years gone by who have sacrificed their lives for the country. The war memorial at the Northern Command headquarters in Udhampur, Jammu and Kashmir, alone holds the names of over 12,000 fallen heroes. If we get down to making a National War Memorial (that has been pending for long) a full count of the brave soldiers who have made the supreme sacrifice for the nation post independence will be readily available, and it will be a lot more than what is recorded at the Northern Command war memorial.

The Nation should be more equitable in showing its respect to those who have taken upon themselves the mantle of securing it. The families of all fallen heroes should receive the same attention as received by those who are conferred with gallantry awards since the loss is the same.   Moreover, consciousness of the soldier’s contribution to the national cause has to be ongoing rather than it being event and ceremony based. The Nation must collectively uphold the respect, morale and fighting capabilities of its soldiers.

It is sad to note that the Armed Forces have been, for quite some time now, embroiled in debilitating and humiliating bureaucratic spats over several issues. The One Rank One Pension (OROP) demand still remains unattended. The Department of Ex-servicemen (DESW) which is charged with the responsibility to look after military veterans does not hesitate from dragging them to court over frivolous cases of disability pension that can well be resolved through in house arbitration. Even more unfortunate is the fact thatit has no compunction in taking such issues right up to the Supreme Court. A demand of the services for representation in the central pay commission is also pending for long.

The defence procurement procedures are so complex that the forces reel under the pressure of being badly equipped and under equipped. The prevailing system is reactive in nature; the National Security Guard got permission to requisition civil aircraft during emergencies only after the 26/11 terror attack in Mumbai. Certain essential weaponry was purchased off the shelf only when a military face off with a foreign power becomes imminent.

The casual attitude of the government negatively impacts the morale of the soldier and erodes his confidence. It leads to avoidable cynicism within the ranks of the armed forces. Due to negativity on the part of a select few all the affection showered by the nation on to its soldiers gets negated.

There is no point in having mammoth establishments like the Ministry of Defence supported by the service headquarters sitting on prime land in New Delhi, while the soldier on ground is suffering due to bad equipment, inadequate pay and pathetic living conditions.

The issue of accountability and transparency is of prime importance in matters relating to defence and security? Keeping the public in the information loop are of utmost importance. The government should not be allowed to hide its inadequacies behind a veil of a self proclaimed need for secrecy. Furthermore, if the forces feel that they are not ready for war they should come out openly with their apprehensions.

If a particular government feels that it can motivate its youth to sacrifice their lives for a salary of Rs 10000/ per month by all means give no more; if the nation feels that we can do without advanced weaponry then the government should call upon the youth to join the Armed Forces and fight with bows and arrows. There is no point in debating these matters endlessly. It is not for the soldier to demand, it is for the Nation to provide!

The soldier’s fraternity and the nation have, since long, given up on the capability of the UPA Government to deliver in the domain of national security. With the new government in place, a ray of hope has emerged. It is well known that the defence forces have a special place in the nationalist policies of the Bharatiya Janata Party led Government, hence, a change for the better is expected.

Time is of essence, decisions must be well considered and opportune.  Defence is too serious a matter to be subject to dithering and unaccounted delays. The leadership of the country must be firm and decisive in all matters related to security. In case the new government takes too long to deliver then chances of it also losing its credibility will become very high and the resultant damage will become difficult to control.