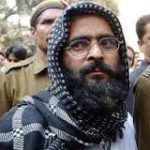 Jaibans Singh Jihadist groups in Pakistan have taken it upon themselves to make an Islamic icon out of Afsal Guru. In September, 2013, a 94-page book titled, “Ahle Imaan Ke Naam Saheed Mohammad Afsal Guru Ka Aakhri Paigam,” was released by JKLF leader, Nayeem Khan, at a Srinagar hotel. Published by National Front, a constituent of the Hurriyat Conference, the book is said to … END_OF_DOCUMENT_TOKEN_TO_BE_REPLACED 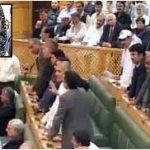 Jaibans Singh Is it the ghost of Afsal Guru or some other earthly elements that are haunting the Kashmir valley since the latter was hanged at Tihar jail almost a month back on February, 09, 2013? The valley has witnessed high voltage political activity since the hanging; the matter has now boiled down to a single point demand of return of his mortal remains to facilitate … END_OF_DOCUMENT_TOKEN_TO_BE_REPLACED