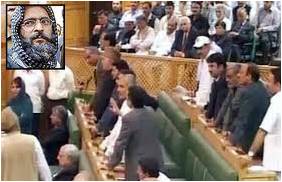 Is it the ghost of Afsal Guru or some other earthly elements that are haunting the Kashmir valley since the latter was hanged at Tihar jail almost a month back on February, 09, 2013? The valley has witnessed high voltage political activity since the hanging; the matter has now boiled down to a single point demand of return of his mortal remains to facilitate burial in his home town. It is quite distressing to note that some regional political parties of Jammu and Kashmir like the National Conference and the Peoples Democratic Party have also joined the chorus for return of Gurus body. This has created a unique situation of a common cause between opposing political entities in the state.

While political parties are voracious in voicing this demand, not one of them has come forward with an assurance that this highly emotive issue will not be politicised in the longer run by creation of a tomb or a monument on the grave. There was a possibility of the government at the centre agreeing to the demand had it come with the required assurance; it is the belligerent posture being adopted by the political players of the valley that has led to a hardening of its stand.

The whole drama is being played out on a number of stages. The rejuvenated separatist lobby has hastily created what it calls the Muttahida Majlis-e-Mushawarat (MMM), a joint consultative body to further a single point agenda of getting Afsal Gurus mortal remains back to the valley. The MMM has been busy announcing schedules of protests and lock outs week after week much to the disgust of the common man. The mainstream lobby, in the meantime, is pursuing its own brand of politics by keeping the legislative assembly paralysed during the crucial budget session; there are demands galore for adjournment motions and general mayhem with politicians of all hues giving their penny worth of comments to an ever eager media. The party leaders are exhibiting their literary skills by shooting out emotional letters to the Prime Minister and others who they feel are in the loop. The alacrity with which the letters are leaked out to the media is a clear indicator that out and out publicity is the actual intention behind writing the same.

A notable question is – where were these screaming so-called guardians of the collective conscience of the valley when Afsal Guru needed them most? The very leaders who are bending backwards to show allegiance with him did not raise a finger in his support while he was alive. Those who now constitute the MMM including different factions of the Hurriyat Conference, the Jammu and Kashmir Liberation Front, the Bar Association and Dukhtaran-e-Millat, did not consider it fit to provide Guru with the legal aid that he required while his case was being tried in court. Let alone the political parties even the state administration did not feel obliged to extend legal aid to Guru on the premise of his being a state subject.

There are other pointers to the ambivalent policy that the separatist lobby had adopted towards Afsal Guru while he was alive. An expose by the whistle blower, Wikileaks, refers to one cable 82638 dispatched from the US mission in Delhi on October, 20, 2006. The cable refers to a conversation of a US representative with Hurriyat leader, Mirwaiz Umar Farooq, in which the latter admitted that his faction had chosen to remain as quiet as possible about the issue because they did not feel strongly that India should pardon Afsal. “If someone is a terrorist he should meet a violent end,” Mirwaiz is reported to have said most candidly. He added that moderate members of the Hurriyat were unable to express this view publicly, given the mood in the valley and the threat from terrorists. He further elaborated for good measure that some speak on Afzal’s behalf individually only out of a sense of obligation rather than strong conviction.

In this fight of the political titans it is the people who are suffering. That the activity continues to cause great inconvenience and economic loss to the common man is something that is not being considered at all. Schools which were to open on of March, 01, have been closed down for another ten days, how the students are expected to cover the lost time is anybody’s guess. Shops and other businesses continue to remain shut across Kashmir since the people are afraid of damage being caused by rampaging Hurriyat workers; the inconvenience and economic loss to the common man is immense. Noisy and uproarious scenes in the legislative assembly are leading to suspension of crucial business.

A more serious fall out is on the security front; the political churning is being seen by terrorists as something that they can exploit to their advantage. They have, as such, started planning audacious strikes to gauge the waters. The recent killing of two policemen in North Kashmir is an indicator in this regard. It is a blessing that the Indian army is not involved in the ongoing politics and will not allow the terrorism to resurface, but from the political segment the maturity required to understand the larger picture is not forthcoming.

Undoubtedly, in his death, Afsal Guru is being made a pawn in virulent political brinkmanship. It seems that the entire leadership of the Kashmir valley was awaiting his execution so that he could be converted into a martyr to gain political mileage. The leadership, however, is not in sync with the times; the people today are too well informed and aware to be taken in by such blatant opportunism. It is now up to the people of Kashmir to see through the devious plans of their leaders and give to them a clear message to desist from playing these futile and dangerous games that cause more harm than good.