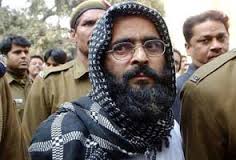 Jihadist groups in Pakistan have taken it upon themselves to make an Islamic icon out of Afsal Guru. In September, 2013, a 94-page book titled, “Ahle Imaan Ke Naam Saheed Mohammad Afsal Guru Ka Aakhri Paigam,” was released by JKLF leader, Nayeem Khan, at a Srinagar hotel. Published by National Front, a constituent of the Hurriyat Conference, the book is said to be a reproduction of Guru’s diaries written in jail. In the absence of potential buyers, 5000 copies were distributed free in the Kashmir valley. Yet another initiative was production of a compact disk titled, “A tribute to Afsal: A cultural aesthetic tribute to the resilience and struggle of people of J&K.” This was released on September, 9, 2013, in the parallel function that the separatists organised when Zubin Mehta held a concert in Srinagar. The album is available on the net for a free download!

It seems as if the separatist leaders painted a very rosy picture of the twin initiatives to their masters across because the terrorist organisations based in Pakistan decided to release yet another book by Afsal Guru titled “Aaina”, on January, 26, 2014, when India was celebrating its Republic Day. A huge rally called “Muhammad Afsal Guru Shahid Conference” was organised for the purpose in Muzaffarabad, Pakistan Occupied Kashmir. Thousands of people were bussed to the venue, security was tight; cameras and tape recorders were not allowed in. Flags of Jaish-e-Mohammad (JeM) and Lashkar-e-Toiba (LeT) inscribed with Al-Jihad were unfurled in the venue. Surely, the administration knew all that was happening, yet, it did not take any action!!

The terror mongers seem to be so taken in by Afsal Guru that Maulana Masood Azhar, leader of the outlawed JeM and a most wanted terrorist came out of hiding to launch the book. This was his first public appearance in years; he spoke through a mobile phone but his voice was transmitted through loud speakers to thousands of Jihadi militants who had congregated at the rally.

A Pakistani weekly – Al Qalam covered the rally in great detail over many weeks. It published a special page of video links. The first chart on the page has speeches of those who attended the rally which included, apart from Masood Azhar, Syed Salahuddin, Maulana Illyas Qasmi, Mufti Owais Kashmiri, Mulana Masood Ilyas and more than a dozen other rabid Jihadi leaders. The second box on the page carries an index of the venomous poems recited in the function.

The speeches were rabidly anti-India and provocative. Masood Azhar openly called upon Pakistan authorities to lift restrictions on Jihad. Syed Salahuddin said that no solution would come out of talks and Jihad was the only solution to the Kashmir issue. He said that by killing Afsal Guru India had challenged the Muslim community. The poems termed Guru’s “martyrdom” as a miracle – of all things. As the book was released admiring crowds chanted slogans and called for the “liberation” of Kashmir.

The terror masters wanted to maintain pressure as long as was possible. They planned out an extension of the propaganda campaign unleashed at Muzaffarabad in the Kashmir valley. The three day protest in the valley starting from the day when Afsal Guru was hanged was the outcome of this plan.

In anticipation of the situation turning volatile, authorities in Jammu and Kashmir imposed some restrictions on movement and congregation; this is standard operating procedure to maintain law and order during potentially volatile periods. By clever manipulation of captive media the separatists tried to make it out to be something unusual, thus giving an impression that the name of Afsal Guru was a potential threat to peace and stability in Kashmir. Some more theatrics were resorted to; Yasin Malik went “underground” to resurface at Maisuma, Srinagar for what he called a “Lal Chowk Chalo” march. The security forces went through the motions of arresting him even as he got an opportunity to make his two bit statement in front of the miniscule attendant media.

This drama continued for the three days after which it was business as usual in the valley and everybody heaved a sigh of relief. Three days of respite was enjoyed by the locals while the stone pelters and sloganeers got some practice in their art. The worst affected, as always, were the daily wagers and their deprived families who suffered pangs of hunger.

Nobody paid any attention to what was going on in the valley!! India was glued to the events in Delhi where Kejriwal was holding media centre stage with his own set of theatrics. The international community, in any case, has no concern for the likes of Afsal Guru. Even in Jammu and Kashmir the media focus was not on Afsal Guru but on the alleged rape charges against the Minister of State for Health, Shabir Ahmed Khan and the mayhem in the State Assembly on the issue of the administrative units that the government had created of late.

The people to Kashmir sat at home in vain over three days since the cause of Afal Guru had no takers anywhere. The separatists knew that their movement would fall flat; they simply went through the motions due to pressure from their masters in Pakistan.

There is enough reason to question the source of the written material ascribed to Afsal Guru that is surfacing at regular intervals in different locations and is being passed off as the original thoughts of Afsal Guru. There is a possibility that it is being manufactured with the intention of using his name for the sake of propaganda o further the Jihadi agenda. If, however, the said matter was actually written by Afsal Guru then the nexus between him and Pakistan based Jihadist groups stands established. This puts paid to all arguments about Guru having been falsely implicated.

Notwithstanding the source of the material it is amply clear that the terror mongers have a well laid-out plan to canonise Afsal Guru as the abiding pillar of Jihad. He has now become their most effective tool for propaganda. His name will be used for giving out a call for Jihad and indoctrination of new recruits. When Afsal Guru was alive nobody in Pakistan spared a thought for him; now that he has been justifiably hanged; the Pakistani Jihadists are falling over themselves to derive as much mileage as possible. He is being turned into a patron saint for Jihadist terror.