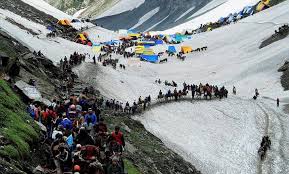 The annual pilgrimage to the holy cave of Amarnath in Kashmir, for this year, is scheduled to commence on 01 July and culminate on 15 August, the auspicious day of “Raksha Bandhan. The Yatra (pilgrimage) is an event that probably rivals the Kumbh Mela’s in terms of sanctity and religious significance.

Shri Amarnath shrine is located at the head of the Sind Valley in Kashmir, flanked in the north by the great Himalayan range and in the south by the Sasakat mountain range. It is located beside a small tributary of the Sind River called Amaravati. It is believed that the Lord Shiva narrated the Amar Katha (Narrative of eternal life)  to Goddess Parvati in this cave; it has been a place of pilgrimage since many centuries.

There are two routes open for the pilgrimage, one from Sonmarg to Baltal and onwards and the other from Pahalgam. The Baltal route is shorter but very steep and a difficult climb. The Pahalgan route is much longer but easier to trek. The uniqueness of the pilgrimage lies in the difficult terrain and the inclement weather that has to be overcome in order to reach the holy shrine.

The fact that Kashmir is under the shadow of foreign sponsored terrorism makes security for the pilgrimage a big challenge. Every year, the separatists give a statement assuring the pilgrims of their safety, they have done so this year too. “There is no threat to Amarnath Yatra from Kashmiris as reported by some mischievous media outlets from their cozy studious in New Delhi and these pilgrims are very much safe in the Valley,” said a recently released statement of the All Party Hurriyat Conference.  However, such assurances are not upheld by the terrorists and incidents of violence leading to civilian casualties have taken place in the past. In 2017, a bus carrying civilians was attacked by terrorists leading to the killing of seven innocent civilians and injuries to another 19.

Security arrangements are ogranised jointly by the Indian Army, paramilitary forces and Jammu Kashmir Police. All arrangements are overseen by the Shri Amarnath Shrine Board (SASB) that functions under the Governor of the state.

All through the period of the Yatra, the route is sanitised from Jammu onwards. The entire route of the pilgrimage from Pahalgam and Baltal is kept under constant surveillance as are the prefabricated huts that serve as accommodation and other administrative points like the Langars (cook houses) and medical posts etc.

Apart from security the Army as also other security establishments provides immense humanitarian aid to the pilgrims. Throughout the Yatra, in addition to the arrangements made by the civil administration and other voluntary organisations, they provide food, refreshment and shelter to thousands of pilgrims. Helping the aged and the feeble negotiate the adverse terrain is yet another goodwill gesture extended.

The army also sets up medical aid posts at various points along the route that are open to all civilians day and night. Veterinary camps are also organised to ensure the safety of the ponies, pack mules and other animals used in the Yatra. The army has exigency plans in place to meet any natural calamity. The mere presence of the Indian soldiers gives a sense of security to the pilgrims.

The prominent role played by the army in the conduct of the Yatra by virtue of its size and wherewithal, by no means, belittles the excellent effort put in year after year by the paramilitary forces and the Jammu and Kashmir Police.

Hotels, shops, pack ponies, porters and all other related services gear up to welcome the pilgrims. A festive air is visible. The guides and porters of both communities are equally conversant with the legend and mythology and are more than willing to narrate the same. Anybody requiring assistance finds hundreds of hands extended towards him, without knowing whether the hand belongs to a Hindu or a Muslim.

The administration is working overtime to ensure that everything is in place in a timely manner. Home Minister Amit Shah is scheduled to visit the pilgrimage site and inspect the preparations on 30, June before commencement of the pilgrimage – such is the importance being accorded to the same.

By remaining disciplined, the pilgrims can make a big contribution in ensuring the pilgrimage becomes a memorable one for all. Elaborate instructions on physical preparation for the Yatra, the manner of conduct, proper clothing for the same, security instructions and actions to be taken during medical and other emergences are available on the internet, there are adequate assistance centers all through the route and rest areas. These should be read, assimilated and strictly adhered to. The most important by far is strict adherence to security rules and regulations. It should never be forgotten that the threat to the Yatra from terrorist violence is palpable and all have to join hands to negate the same.

With all arrangements in place it can be safely said that Kashmir is poised to receive its annual guests to its most revered shrine. It is time to extend best wishes to the organisers as well as those who are undertaking the holy pilgrimage.

(Jaibans Singh is a reputed Geo-political expert, columnist and author)