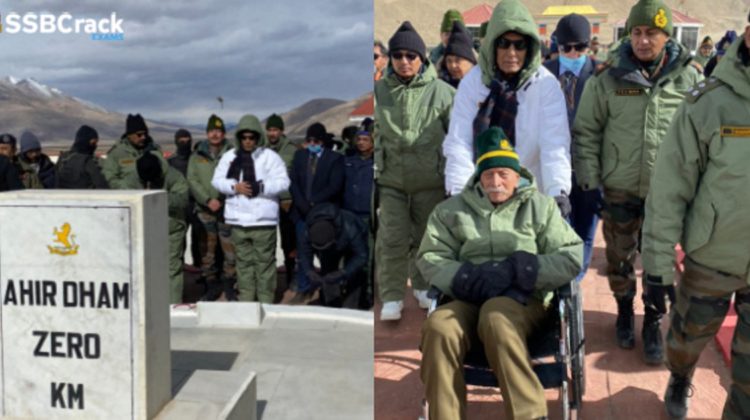 On 18 November 1962, a small, courageous group of Indian soldiers stood rock solid against an enemy far better equipped and in far greater numbers. 114 heroes out of the total strength of 120 deployed fell in the battle fighting to the last man and the last round and after afflicting huge casualties upon the enemy. This was the epic Battle of Rezang La  and the unit was 13 Kumaon of the Indian Army.

Their sacrifice was not in vain; the Chinese realised that fighting the courageous Indian Army any time in the future would be a misadventure on their part. This has led to peace, however tenuous, along the Line of Actual Control (LAC) for a long time amid minor incidents. Tactically speaking, the resilient defence by the Indian troops, stopped the enemy on his tracks and reduced the threat to the Chushul Airfield which was being defended by a Brigade sized force. The Chinese declared a ceasefire three days later.

The exceptional bravery of Charlie Company, 13 Kumaon, that fought the epic Battle of Rezang La was recognised by the grateful nation with conferment of 12 gallantry awards including the Param Vir Chakra (PVC) awarded posthumously to the company commander, Major Shaitan Singh. Legend has it that Major Shaitan Singh moved from post to post, without any cover, reorganising the defences and boosting the morale of his men. As a result, the heavily outnumbered, out-gunned and inadequately clothed soldiers beat back repeated waves of the attacking Chinese. When their bodies were recovered three months later, they were still holding their weapons. Signs of hand to hand engagement were visible. In the process, Major Shaitan Singh was seriously wounded and later succumbed to his injuries along with most of his soldiers.

The unit later erected a memorial in the site of the action where are inscribed the following immortal words, “How can a man die better, then facing fearful odds, for the ashes of his fathers, and temples of his gods. To the sacred memory of the heroes of Rezang-La, 114 martyrs of 13 Kumaon, who fought to the last man last round against hordes of Chinese on 18 November 1962.” Words that never fail in producing a lump in the throat of any true patriot who reads them. The monument erected by the unit has now been renovated. It was beautiful earlier too, the new structure reflects the pride of the entire nation in memory of its heroes.

In a befitting ode to the fallen heroes and to the brave unit that fought the battle, Union Defence Minister, Rajnath Singh visited Rezang La on 18 November 2021, to inaugurate the renovated memorial. He was received in Ladakh by LT. General YK Joshi, General Officer Commanding-in-Chief, Northern Command and was accompanied by a big delegation that included the Lieutenant Governor of Ladakh Shri RK Mathur, Member of Parliament from Ladakh, Shri Jamyang Tsering Namgyal, Chief of Defence Staff, General Bipin Rawat and Vice Chief of Army Staff, Lt Gen CP Mohanty.

The event gained a unique emotional touch by the presence of Brigadier RV Jatar (Retd) who had participated in the battle as a Captain and is now over 90 years of age. Defence Minister Rajnath Singh personally escorted the veteran soldier to the memorial by pushing his wheelchair; the emotive image has since gone viral. Others present were Shri Narpat Singh Bhati, son of the legendary Major Shaitan Singh, PVC, (Posthumous) accompanied by his family and veteran officers. 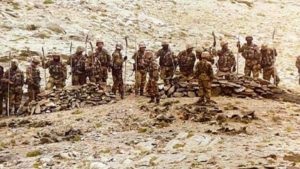 Unabated conflict along LAC with China

The  renovation of the war memorial and commemoration of the heroes of Rezang La is a true testimony to their unmatched courage and indomitable grit, their bravery and strong resolve against all odds. They knew that they did not stand a chance, yet, they went down in a blaze of glory taking with them more than 500 enemy soldiers.

It is relevant here to recollect that in March-April, 2020, taking advantage of the COVID situation, the People’s Liberation Army (PLA) of China made India a target of its “wolf-warrior diplomacy” with simultaneous intrusions in Sikkim (Naku La) and the Eastern Ladakh sectors. The Eastern Ladakh sector witnessed Chinese misadventures to move westward along the Line of Actual Control (LAC) into areas where they had no claim.

The Indian response was swift and professional. While the Army was given full liberty to handle the situation on ground a “whole of Nation” strategy to meet the malevolent design was put in place. It included diplomacy, trade barriers and economic repercussions for China.

On ground in eastern Ladakh, the Indian troops gave a bloody nose to the Chinese in a physical face-off in Galwan. This was followed by professional and  incisive operations carried out by Indian troops to hold the Kailash ranges ; a build up to dominate the Chinese Moldo garrison from Rinchin La, Rezang La, Black Top and further build up to dominate the Spanggur gap from Gurung Hill and Magar Hill. The Chinese were caught completely by surprise, they did not know what was happening.

Though in a dominating position, India has been insisting that status quo ante all along the LAC be maintained. It is so because India does not want the situation to escalate, she wishes for peace under honourable conditions and a resolution of the dispute  through negotiation. Ten Months hence, on February, 10, 2021, the Chinese relented and agreed to maintain status quo ante in the most contentious Pangong Tso Lake sector. A  disengagement process with withdrawal to pre-designated locations well within claim lines on both sides was put in place. However, the Chinese continue to hedge and haw in the many meetings that have been held to resolve the situation in other areas.

The emotive and prestigious inauguration of the Rezang La War Memorial is a clear indication to the Chinese that they should think many times over before indulging in a misadventure in eastern Ladakh or anywhere else along the LAC.