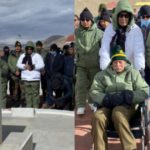 Jaibans Singh On 18 November 1962, a small, courageous group of Indian soldiers stood rock solid against an enemy far better equipped and in far greater numbers. 114 heroes out of the total strength of 120 deployed fell in the battle fighting to the last man and the last round and after afflicting huge casualties upon the enemy. This was the epic Battle of Rezang La  and … END_OF_DOCUMENT_TOKEN_TO_BE_REPLACED