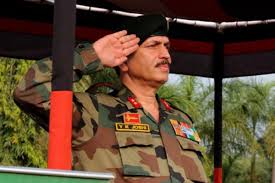 On the eve of Kargil Vijay Divas, Lt. Gen. YK Joshi, Army Commander, Northern Command, being one among the heroic commanding officers who led their units in the Kargil War in 1999, gave an interview to a television news channel, CNN News 18. It is notable here that 13 Jammu and Kashmir Rifles, that Lt. Gen (the Lt. Col) YK Joshi commanded in the Dras-Muskoh sector of Kargil during the war was conferred with the citation of “Bravest of the Brave” and won two Param Vir Chakra,  eight Vir Chakra and 14 Sena Medal. The iconic Captain Vikram Batra, PVC (Posthumous) and Rifleman (later Subedar) Sanjay Kumar, PVC, are from the unit. Lt. Gen Joshi too was awarded Vir Chakra.

The General is  not given to engagements with the media; he lets his deeds do the talking. Yet, he does accept interview invitations during the Kargil memorial week basically to revive memories of the courage and bravery of his troops during the war. The programme titled “The Man with a Mission.” was essentially an ode to the brave soldiers he has commanded during his long and chequered career, his “Bravest of the Brave” battalion, the Indian Army which he continues to serve with dedication and his Nation – India.

In the interview, the General spoke of the heroic action of his troops under Captain Vikram Batra which led to the capture of the crucial Point 4875. With a lot of pride he spoke of the honour that he felt on having commanded  the “finest troops in battle” and the sense of reverence and gratitude that he holds for the same. He described the charge to the top of Point 4875 led by Captain Batra as an daredevil act that has no precedence in annals of warfare. Point 4875 has now been renamed “Batra Top” to keep the memory of the epic battle alive for all times to come.

In a very emotional comment he acknowledged the soldierly attributes of the troops that he is presently commanding in the Northern Theatre by saying that even today the Indian Army is full of courageous soldiers like Captain Batra, always ready to respond to the call of the Nations. This comment makes the heart of every Indian swell with pride.

In the second part of the interview that dealt with the present situation along the Line of Actual Control (LAC) with China and the Line of Control (LOC) with Pakistan, the General gave a very honest and straightforward appraisal of the situation. He termed the situation as an ongoing  challenge wherein the Indian troops are “acquitting themselves with distinction in defending the territorial integrity of the Nation and its sanctity.” Having said so, he made no bones about the fact that, in Eastern Ladakh, India will need to be prepared for a long haul, an aspect similarly defined by Defense Minister Rajnath Singh during his recent visit to Ladakh.

The General clarified that the Indian army has been engaged with People’s Liberation army (PLA) of China in a military dialogue to resolve the situation in a manner that would first lead to disengagement and only then transcend to de-escalation. While stating the need for a certain degree of commitment essential to move forward in a positive manner, the General made it very clear that the process will be conducted on principles of mutual and equal security for both sides. He was emphatic in expressing that the territorial integrity of the country would not be negotiable. “While we are investing sincerely in this ongoing endeavour to bring about peace along the border, we also remain prepared at all times for any eventuality,” he said.

The seriousness with which the Indian army, under his watch, is applying the aforementioned policy is visible from the reports of a high degree of vigilance and operation preparedness of the Indian troops in the Ladakh sector. Rapid buildup is underway with enhanced aerial and ground combat patrolling being resorted to, even as commanders on both sides work towards a restoration of the status quo ante, with both sides withdrawing to their previous positions with a common area in between.

General Joshi expressed complete confidence in the battle preparedness of his troops who, he said, are well equipped and battle hardened. He made particular mention of the battle hardiness of the Ladakh Scouts and also spoke in glowing terms about the support that the Indian Army is receiving from the people of Ladakh.

With regard to the situation along the LOC with Pakistan the General said that there has been a 40 percent increase in ceasefire violations from Pakistan mainly to facilitate infiltration of well equipped foreign terrorists. He added that efforts are on from Pakistan to recruit local Kashmiri boys into the fold of terrorism and also provision administrative support to them in terms of money, weapons etc.

The General expressed confidence of being well in control of the situation due to synergy between all security forces and receipt of actionable intelligence, both human and technical, which is leading to incisive and clinical counter terrorist operations with minimum collateral damage. The terrorist ranks are depleting at a very fast pace.

Having said so, he called upon the Kashmiri youth to not fall prey to propaganda or come under the influence of the Pakistan sponsored Over Ground Workers (OGWs). He said that the Army is making a special effort to wean away the youth from the cult of terrorism with a strategy based on three prongs – prevent, protect and empower. Alongside this statement of the General came some good news from Srinagar with Inspector General of Police, Kashmir Range, Shri Vijay Kumar, confirming that  there is no terrorist of local origin hailing from Srinagar left. “After #killing of #LeT #terrorist Ishfaq Rashid Khan yesterday, no resident of #Srinagar district in terrorist ranks now,” he said in a Tweet.

Sadly, some sections of the Indian media attempted to pick holes in the honest and straightforward interview given by General YK Joshi by selectively quoting a single line from his comprehensive narrative and distorting it. The attempt of these elements failed with the public treating it with the contempt that it deserved.

The Army Commander, Northern Command, has made it very clear that the situation in eastern Ladakh will be resolved with application of a mature yet firm policy and without compromising the territorial integrity and sanctity of the nation. He is supremely confident of the capacity and capability of his troops to achieve this end state. He is ready to show patience in the process so as to avoid escalation but should such escalation take place and conflict becomes imperative, he and his troops are well poised to face the challenge.

The interview given by Army Commander Northern Command leaves no space for any concern about the capability of our great army in upholding the interest of the Nation. The Nation must read the lips of Lt. Gen. YK Joshi, a committed and decorated soldier of the Indian Army and remain confident of the ability of her noble soldiers to protect her under all cost.

(Jaibans Singh is a geo-strategic analyst, columnist and author)