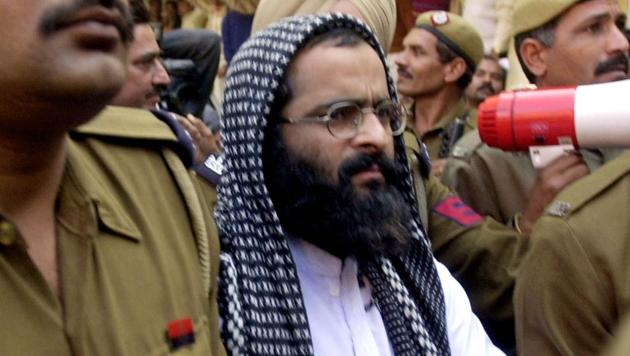 Mohammad Afzal Guru, a native from Sopore, Kashmir and an active member of the  Jammu and Kashmir Liberation Front (JKLF) was arrested and charged for his role in the planning and execution of the attack on the Indian Parliament in 2001. Complete judicial process was followed in the ensuing case against him and he received a death sentence. The verdict was upheld by the Supreme Court of India; a mercy plea was then made to the President of India which was rejected.

With the legal process thus completed Afzal Guru was executed on 9 February 2013. It cannot be denied that there is nothing moral or immoral so far as political ideology is concerned; in the modern civilised world every person has a right to hold an opinion and to declare the same. This, however, cannot be stretched to the point of declaring a war on the state and resort to tools like terrorism. When such an act takes place, it is the legal rather than the moral or political framework that comes into play. Afsal Guru waged war against the Indian Nation; he was caught in the act, tried by the established judicial process, declared guilty of the crime and punished with hanging. The circumstance of the individual being proved to be an enemy of the state does not leave any moral questions to be considered.

The decision was, in fact, delayed due to political pressure from the so-called Kashmiri leadership, sadly including the mainstream parties like the National Conference and the Peoples democratic Party. They opposed the judicial process and the decision taken thereof  by predicting chaos in the then state of Jammu and Kashmir as a consequence to the hanging. This prediction was based on a flawed assessment since it took into account only a few urban centres of the Kashmir valley where the death sentence was being opposed. After the hanging, curfew has been imposed only in ten out of the twenty two districts of the State and these too did not react as violently as predicted. In any case, expectation of such trouble does not constitute a reason to delay implementation of the orders of the court.

Pakistan initiated a massive propaganda campaign to derive as much benefit from the hanging as possible in furthering its evil agenda of spreading terrorism in Kashmir. The campaign formed an important segment of its process of indoctrination of Kashmiri youth into the fold of terrorism. The propaganda initiative was spearheaded by the Jihadi groups operating from Pakistan whose leaders openly eulogised Afzal Guru in an attempt to create around him the aura of being a Jihadi icon.

The Inter Services Intelligence (ISI) of Pakistan successfully incorporated  their paid stooges in the Kashmir valley in this process of propaganda and indoctrination. Propagandist material paid for by the ISI was published in the valley itself and distributed free of cost. a good example of this process is production, in September, 2013, of a document titled “Ahle Imaan Ke Naam Saheed Mohammad Afsal Guru Ka Aakhri Paigam,” said to be a reproduction of Guru’s diaries written in jail,  In the absence of potential buyers, 5000 copies were distributed free in the Kashmir valley.

Yet another initiative was production of a compact disk titled, “A tribute to Afsal: A cultural aesthetic tribute to the resilience and struggle of people of J&K.” This was released on September, 9, 2013, in a parallel function that the separatists organised when Zubin Mehta held a concert in Srinagar. The album is available on the net for a free download.

Buoyed by what was seen as a success of the Afzal Guru based propaganda in Kashmir, the Jihadi leaders of Pakistan on January, 26, 2014 released yet another book said to be written by Afzal Guru himself and titled “Aaina.” A huge event called “Muhammad Afzal Guru Shahid Conference” was organised for the purpose in Muzaffarabad.  A Pakistani weekly – Al Qalam covered the conference in great detail over many weeks. It published a special page of the video links. The first chart on the page had speeches of those who attended the rally which included Masood Azhar, Syed Salahuddin, Maulana Illyas Qasmi, Mufti Owais Kashmiri, Mulana Masood Ilyas and more than a dozen other rabid Jihadi leaders.

The speeches were rabidly anti-India and provocative. Masood Azhar openly called upon Pakistan authorities to lift restrictions on Jihad. Syed Salahuddin said that no solution would come out of talks and Jihad was the only solution to the Kashmir issue. He said that by killing Afzal Guru India had challenged the Muslim community.

The point that rises here is – If the matter being published by the anti-India establishments in the name of Afzal Guru has been written by him then the nexus between him and Pakistan based Jihadist groups stands established and this puts paid to all arguments about Guru having been falsely implicated.

Over the years, the impact of the Afzal Guru based propaganda has lost its sheen, especially so since August 2019, when the repressive Article 370 and Article 35A were abrogated from the Indian Constitution by due constitutional process and the state was bifurcated. The people of Kashmir are now determined to take full advantage of the environment of peace and prosperity that has been created in the region by the people themselves, the security forces led by the Indian Army and the Government at the centre and the state.

Pakistani propaganda in the name of Afzal Guru has considerably reduced over time as the people of Kashmir have realised its evil intent. The Hurriyat, now almost completely marginalised, cannot do much to assist the ISI cause. There is a weak call for a lock down in urban Kashmir that does not elicit much response. Now the situation is such that on this day the authorities do not impose restrictions on the movement and assembly of people or order the suspension of mobile Internet services as a precautionary measure on the day.