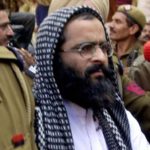 Jaibans Singh Mohammad Afzal Guru, a native from Sopore, Kashmir and an active member of the  Jammu and Kashmir Liberation Front (JKLF) was arrested and charged for his role in the planning and execution of the attack on the Indian Parliament in 2001. Complete judicial process was followed in the ensuing case against him and he received a death sentence. The verdict was … END_OF_DOCUMENT_TOKEN_TO_BE_REPLACED