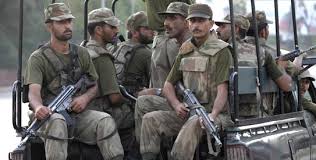 Pakistan would rate as one of the most militarised regions in the world. The country is involved in a civil war like situation in its western frontiers comprising of North and South Waziristan; it is in forcible occupation, through military might, of a large portion of the Indian state of Jammu and Kashmir; there is the full blown insurgency in Balochistan. Most distressing is the nationwide proliferation of fanatic Jihadi groups that have the potential of striking anywhere in the country. Places like Karachi, which were a hub of financial activities not too long ago, have been converted into a den of violence and terror.

Under such circumstance, it is surprising that the Pakistani leadership has the gumption to rake up the highly irrelevant issue of “demilitarisation of Jammu and Kashmir” in international forums.  The first such proposal was put forth in 2006 by General Pervez Musharraf when he was President of Pakistan; it was later shot down by the Pakistan People’s Party (PPP) government and the matter was put to rest.

Recently, Prime Minister Nawaz Sharif has attempted to reopen the Pandora’s Box by making a similar proposal in the United Nations General Assembly (UNGA) as a part of what he termed as a “four point peace initiative”. He has set forth an idea that the Pakistan army should relocate itself out of Pakistan Occupied Jammu and Kashmir (POJK) as should the Indian army from the Indian state of Jammu and Kashmir.

Coming from the prime minister of a country that wishes to occupy a prominent place in the global comity of nations, this proposal sounds absolutely ridiculous and out rightly preposterous.

There is every reason for Pakistan to move out, bag, baggage and military from POJK. There is, however, no fathomable reason for India to make any changes in the management of a state that is its integral part.

The Indian state of Jammu and Kashmir is enjoying all freedom, rights and privileges as mandated under the Constitution of India. The defence of this state, which borders two belligerent neighbours, is the responsibility of the Indian Union and has been further vested upon the armed forces of the nation. The armed forces have in place, plans for defence of the state against external and internal threats. Troop deployment is done in accordance with these plans.

Putting on place an appropriate defence structure is the unalienable right of every nation and no outside power has any right to interfere in the same. It is surprising that the Government of India did not emphasise on this point in its riposte to the Pakistani reference to Kashmir in the UNGA.

Militarisation entails that the armed forces would have a dominant role to play in the administration of the militarised region. It allows forcible indenture of labour, economic sanctions, financial oversight by the Army, use of civilian land and property without compensation and state intervention through its military in all other such matters that are deemed to be necessary.

The state of Jammu and Kashmir is not witnessing any such restrictions; in the state there is a civilian government being run by elected representatives in accordance with the most enlightened democratic norms in the world. The security forces function as part of a unified command under the chairmanship of the chief minister of the elected civilian government. The administrative requirements of the security forces, when met through local resources are paid for in full. In fact, presence of the security forces in the state generates employment and gives a boost to the economy of the state.

In POJK, unfortunately, the situation is quite different. The region has been segmented into two parts to divide its strength and break its harmony. There is a sham government in place in both segments which has no powers whatsoever. The powers are vested in a draconian Ministry of Kashmir Affairs which is a part of the federal government.

The structure that has been created facilitates political and social subjugation of the people. The vast natural resources and economic potential of the region is being colonised and exploited by the Punjabi elite and leadership of the country. There is a plan in place to carry out resettlement of Punjabis and Pushtuns in the area with the intention of changing its demographic profile.

Terrorism is being exported to India from this area. The resultant presence of mercenaries and terrorists in large numbers over there has the people enveloped in a pall of fear, insecurity and gloom. These anti-social elements indulge in killing of innocent civilians, extortion, exploitation of women and unmitigated violence.

There has been no development in POJK in the last six decades that it has been under the colonial yoke of Pakistan. The area is deprived of basic amenities like health, education, social security etc. There is no media worth the name so information does not come out at all. There is no forum available where the people can express their woes.

It is quite clear that POJK is a militarised zone that needs to be liberated from the iron hand of the Government of Pakistan and its tools of suppression, mainly the Pakistan Army. Now that Pakistan has raised the issue of demilitarisation, the international community should take appropriate steps to improve upon the dismal conditions under which the people of POJK are surviving.  India should take a lead in this honourable and noble initiative.

Pakistan feels that by applying international pressure it will be able to reduce the security threshold in Jammu and Kashmir, thus creating space for its Jihadi hordes to take over. The Indian army as well as the central and the state government should remain aware and vigilant of this diabolic plan to ensure that it does not succeed. The slightest window of opportunity will be exploited by Pakistan. Wisdom lies in not providing the same at all.