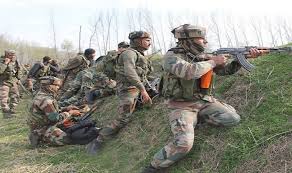 The deviousness of a mind bent upon causing death and destruction is phenomenal; fortunately, the will of honest, hardworking people fighting for what is righteous is also unparalleled. This fight between good and evil is in full display in the beautiful land of Kashmir.

Foreign sponsored terrorism raised its ugly head in Kashmir nearly three decades ago. When all seemed to be lost, the people of the valley came out in support of the very determined security forces to challenge the evil and defeated it after a bloody conflict.

The concept of Jihad was rejected in Kashmir by the very people whom it was supposed to liberate and the cult of terrorism has been convincingly defeated, yet, the architects of this evil agenda have not given up hope. Attempts towards resurrecting the same by any means remain unabated.

At this stage, when the Indian Army has successfully plugged routes of infiltration and reduced the ingress of foreign terrorists to a trickle, the focus of the terror strategists sitting across the border has shifted to recruitment of cadre from among the local boys.

Every trick in the book, ranging from ideological indoctrination, false promises, lure of money and illusion of unlimited power is being used to mislead young boys into picking up the gun. The numbers of boys getting ensnared in this deceitful plan is miniscule – a few score every year; sadly, this is enough for the terror mongers to keep the pot boiling, with help from a sensationalist media of course.

The result of this diabolic plan of the terror strategists is that Counter Terrorist (CT) operations in Kashmir perforce have to be directed against these young and misled local boys. Security forces make all possible effort to wean them away from the self destructive path that they have chosen. A chance to surrender is left open till the very end of the all operations launched against them. Some take the option but many unfortunately do not, more out of fear of humiliation than any other reason.

Security forces can assist the boys only to an extent; hence, many of the terrorists being exterminated in Kashmir these days are locals.

The local boys who have been handed over a rifle and set out to function as Jihadi’s do not stand a chance against the extremely well trained security forces and as a result, they have been falling like nine pins to precision, intelligence based CT operations carried out by the security forces.

This situation posed a big challenge to the terror strategists who worked out an effective counter strategy. By taking full advantage of the “no collateral damage” policy of the government they have started instigating civilians towards causing hindrance to the CT operations by pelting stones and raising slogans against the security forces.

Mostly this activity is started by paid stooges of Pakistan along with some impressionable local boys not shy of earning a quick buck. In many cases, especially when the terrorist holed in belongs to the area, the civilians also join in and the crowd increases.

The CT Operation at Tral, South Kashmir on 05 March gave a clear indication that security forces have devised effective means to counter this strategy of the terror mongers. As the operation progressed the stone pelters came into action, as is the norm these days; since the holed in terrorists were locals the stone pelters were joined by some civilians also.

The security forces had come prepared for such an eventuality; the crowd was blocked off from the encounter site by an effective deployment of Police and paramilitary forces. A few shots were fired in the air and some road blocks were established to dissuade the people from doing anything precipitate, the army was thereby left free to carry out the operation.

The newly devised procedure was a resounding success with two militants being killed after a long siege of nearly 16 hours. Of the two killed, one was a local terrorist affiliated with the Hizbul Mujahedeen and the other was of Pakistani origin.

That the success of the operation has rattled the terror strategists became obvious when their paid media, immediately after the encounter, carried a series of articles severely criticising the warning given by the Indian Army Chief, Gen. Bipin Rawat of treating those obstructing CT operations as anti-nationals and the advisory for exercising restraint issued by the state government.

The articles implied that the army would seek retribution against those found to be assisting terrorists by targeting them as “collateral damage.” There is, of course, no truth in these insinuations which is designed to cause a fear psychosis and break the bond between the security forces and the common man. But they do indicate that the new modus operandi of the security forces is causing much desperation to the terror planners.

It would be appropriate to remind the paid media that speaks in support of the terrorists that over the decades of terror sponsored turmoil in Jammu and Kashmir, terrorists have been indiscriminately targeting civilians. There are instances galore of terrorists using civilians as human shields when caught in a cordon and also killing them while targeting the security forces.

Only a week back there was an incident where a grenade hurled by terrorist at CRPF personnel in the crowded area of Murran chowk in Pulwama District resulted in the death of an innocent civilian. The so-called guardians of human rights maintained a stoic silence so far as this horrible incident was concerned.

The writing on the wall is very clear- In Kashmir the will of the majority will prevail and that will is directed towards democracy, peace and prosperity.

There is no way by which the terror mongers can resurrect their weakened situation since the people and the security forces are determined to counter every unholy plan that they come up with. Sooner than later, the menace of terrorism will be completely eradicated from the beautiful valley of Kashmir.

It would, therefore, be best for Pakistan to accept the complete defeat of its policy of a thousand cuts in Kashmir and the sooner it does so the better.