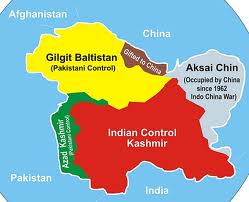 Sadly, successive government in India since independence has chosen to remain silent spectators with regard to the oppression and atrocity that is being heaped on the people of Gilgit-Baltistan by Pakistan.

Despite the people of Gilgit-Baltistan opting to join the state of Pakistan at the time of division of the Indian Sub-continent in 1947, Pakistan has not honoured its commitment of totally integrating the region with the nation. It misused the UN resolution on Jammu and Kashmir to declare Gilgit-Baltistan a disputed territory; re-designated the region as Northern Area and exercised control over it through political agents. The word Gilgit-Baltistan is nowhere mentioned in the Constitution of Pakistan.

In the last six decades plus, Gilgit-Baltistan has been given only cosmetic rights of self governance. Actual power is vested upon the federal government and exercised through the Ministry of Kashmir Affairs and Northern Areas. The demand for a full fledged Provincial status has also not been met by the federal government.

Indian has many reasons to remain concerned about the situation that is developing in Gilgit-Baltistan. Beyond the historic contours of the dispute, what is of significance now is Pakistan involving China in its nefarious design to colonise and subjugate the strategically sensitive region. By involving China, Pakistan is making the country a part of the Kashmir dispute, something that India needs to be wary of.  This move by Pakistan will have implications of instability in the entire South Asian region.

In yet another serious development during the last few years, Pakistan Taliban has established its presence in the territory. Not only is it targeting the Shia population of the region, it is also killing foreign tourists and mountaineers visiting the area. As a result, the tourist industry, which is the life line of the region, has almost collapsed.

It is difficult to comprehend as to why India is dragging its feet with regard to the serious issue despite its legitimate claim over the region as an integral part of the country. When the federal government of Pakistan approved the Gilgit-Baltistan Empowerment and Self Governance Order, 2009, the UPA government in India lodged its protest two whole weeks after announcement of the totally illegal package. What more needs to be said?

India has failed to take credible steps in the international forums to establish its historic right over the region and demand its return. While the civil society in India debates the issue through seminars and an odd article in newspapers here and there successive governments (mostly Congress led) have chosen to maintain a deafening silence.

The Indian media is also not showing any interest in Gilgit-Baltistan. As it is the region is deficit of free press for which reason not much information comes out, what comes out is also not picked by the media thus converting the area into a proverbial lost province. The people there come out on the streets but there is no media to highlight their anguish

All eye are now honed on to the position that the NDA government will take with respect to Gilgit-Baltistan. Prime Minister Narendra Modi is known to hold a view that favours support to the deprived people of the region and getting back all territories of the Indian nation that are under forceful occupation of foreign forces.

PM Modi is a leader of international stature, his word carries a lot of weight, it is time for him to use his goodwill to the benefit of the deprived people of Gilgit-Baltistan. He can raise their plight with world leaders during his meetings and interactions. A small beginning could be to insist upon the territory being shown as inclusive to India in the maps of all nations.

India should insist on greater accessibility to the region and its people. If India has given a free hand to Pakistan to engage with separatists like the Hurriyat Conference it would not be out of place to demand reciprocation from Pakistan, not only with respect to Gilgit-Baltistan but also other insurgency inflicted areas of the country like Balochistan. The modern world is not one in which a democracy, even one as tenuous as Pakistan, can restrict a voice of dissent. If Pakistan has confidence in its own people, if the government feels that disaffection is limited to a few pockets of the populace, it should not hesitate from opening up the region.

Home Minister Rajnath Singh spoke of human rights violations in Gilgit-Baltistan during his visit to the US; such references in international forums should be given more momentum. The actual situation in the region, of which the world remains unaware, needs to be  emphasised again and again so that it gets embedded in the international psyche.

There are many long standing issues that the government of India should have addressed but has failed to do so. Filling up the seats reserved for the people of Pakistan Occupied Jammu and Kashmir (POJK) in the Jammu and Kashmir State Assembly is one important aspect. Representatives from Gilgit-Baltistan and Pakistan Occupied Kashmir Diaspora spread over countries around the world can form part of the legislative assembly. India must provide reservations in its universities and professional institutes to students from the occupied territories; opening the health sector for their benefit of the people would be a good humanitarian gesture.

Many activists from Gilgit-Baltistan are asking India to give up its silence and own up the people as legitimate citizens of India.

An ostrich like approach by India will have disastrous implications. Further procrastination would signify India’s acceptance of Gilgit-Baltistan as Pakistani territory? The issue deserves serious thinking on the part of the Indian government. A course correction coupled with a proactive policy of nurturing the growing pro-India constituency in Gilgit Baltistan is the need of the hour. PM Modi has the stature and the will to change the narrative, all hope is now vested upon him and his government.