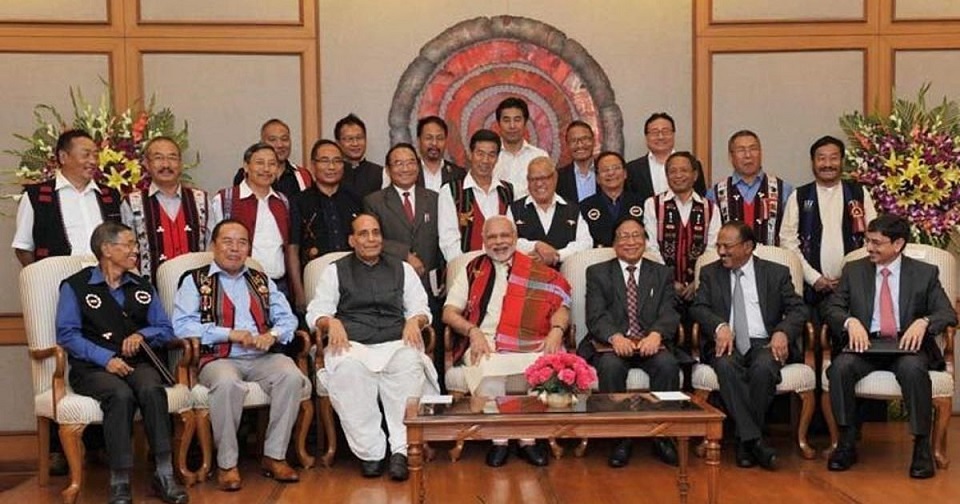 The final frame work of the Naga Peace accord that was initiated on 3  August, 2015 by the NDA-I government is  likely to be concluded in September 2020  at New Delhi under direct observation   of Prime Minister‘s Office (PMO) and with involvement of all identified stakeholders of the Naga community led by Thuingaleng  Muivah , the  86  years old and ailing  General Secretary of the Nationalist  Socialist Council  of  Nagaland, Isak Muivah Group  (NSCN -IM). Shri R N Ravi, incumbent Governor of Nagaland was the authorised interlocutor of the Government of lndia. The process has missed many deadlines but now, it seems, that history is in the making.

During the British rule, Naga hills remained generally unexplored. They were inhabited by a number of self contained tribes of Mongoloid origin who used a Tibetan-Burmese dialect for communication and remained generally hostile to each other. They were also called Headhunters. They often used to come to the foothills in large groups to raid Tea plantation workers and  government officials. British Indian Government undertook a series of military expeditions from 1832 to 1837 to subdue the Nagas, but  they were not  tamed.  Finally, a major military campaign  was launched in early 1874  from the Dimapur axis and Kohima was captured after a month-long  operation.

Simultaneously, by the end of  the 19th century, Christian  missionaries  were inducted and given a free hand to work  in the interior. Beautiful Church buildings, hospitals and schools were established in  Mission compound complexes near all major villages. With time the Tribals shed their religion based on animism and converted to Christianity. During World War l, approximately 5000 Naga youths were recruited in the Pioneer Corps of the British Army and were sent to the Flanders battle zone in France.

With the spread of literacy, in 1928, Naga youth formed Clubs in Kohima, Mokukchung and other towns. They submitted a memorandum to the Simon Commission demanding autonomy for the Naga Hills.  During World War II, one group supported the allied forces against the Japanese invasion and a  second group led by Dr Angami  Zapu Phizo, a member of   Indian National Army of Subhash  Chandra Bose, fought against the British forces. Phizo, towards the end of 1945, formed  the Naga Hill District Tribal Council  that was later converted to the Naga National  Council ( NNC) in 1946. Its basic demand was a consolidated Greater Nagaland covering  all Naga dominated  areas of lndia   and Myanmar. NNC cadres were recruited  from Naga youths and  were also motivated to take up arms against India and Myanmar if Independent Nagaland was not formed by the outgoing British authorities. Thus, the seeds of prolonged insurgency were sown  before India achieved  freedom on 15 August, 1947.

Nagaland  is a  mountainous, landlocked border state of Northeast India with a total area measuring 16,580 sq kms. It is surrounded by Arunachal Pradesh in the north,  Assam to the west, Manipur in the south and Sangain province of Myanmar from the east.  It is mostly a hilly region with average heights varying from 1000 metres to 2500  metres. It is rightly called Switzerland of the East because of its beautiful landscapes

Nagaland became the 16th state of the Union of lndia on 1 December 1963. Presently, it has 12 administrative districts based on various ethnic tribes. The Chief minister is Neiphiu Rio. There are 16 major tribes each having a unique identity, dress, culture and dialect. There are some minor sub-tribes also along with a spattering of Bengalis, Nepalese and Marwari shop keepers.

After considerable persuasion, a nine point Peace Agreement was signed in 1947 between top Naga leaders and Akbar Hydari, then Governor of Assam. It was agreed to hold a Referendum after ten years.

However, NNC launched underground  operations against the government of India in 1948  and also announced formation of a Naga Federal Government (NFG). It constituted a full-fledged cabinet with over ground workers and collected taxes from the people. The movement took a violent turn in 1953 when  a number of Government officials were executed by the NNC. This heralded the advent of active insurgency. Army columns were moved in to support Assam Rifles and Armed Forces Special Powers Act was introduced, in 1958, to suppress the insurgency.  Another 16 Point agreement was signed  in 1959  between Naga leaders and GOI to bring peace but the stalemate continued.

The Shillong Accord  was the third agreement and was signed in 1975. It had the approval of all  Naga organisations. Under this, all NNC cadres were to lay down arms and were to be rehabilitated in the mainstream. All sedition charges against hostiles were to be  dropped. Sadly, the breakaway  groups of Tangkhul, Sema and Konyak tribes did not surrender. Instead, they went underground  and formed a new insurgent armed group  named Nationalist  Socialist Council of Nagaland, Isak Muviah ( NSCN- lM)  in 1980 to revive the insurgent movement. The  Chairman was Isak Chisi Swu and the General Secretary was Thuingaleng  Muivah.  NSCN-IM presently has a cadre strength of approximately 5000 insurgents armed with M-16 and AK 47s. Its core demand is Nagalim, a separate nation with separate constitution and separate flag. With time, splinter groups of NSCN also emerged, the main being NSCN-K (Khaplang). It appointed Shangwan Shangyun Khaplang, a Burmese Naga, as Chairman and Khango Konyak as Vice Chairman of the group.

NSCN -K (Khaplang) further split into another parallel insurgent group on 30 April 1988  after an assassination attempt on Khaplang himself. The main demand remained establishment of independent Nagalim including territory of the Saning  Distict of Myanmar. The current  cadre strength  is approximately 3000 . They operate in northern and eastern Nagaland and raise funds through taxation, extortion, kidnapping and killing.  Both  factions have clashed a number of times.

NNC almost ceased to exist  after the death of its founder Dr, A Z Phizo on 30 April 1990 in London . NSCN-IM, however, continued to carry out  lethal ambushes against road convoys of  security forces (SFs).  The Army also intensified its counter insurgency grid  and  inflicted heavy casualties on  the undergrounds (UGs).

Shri  Atal  Bihari Vajpayee took an initiative in 2001 in consultation with Naga organisations and Tribal Councils and announced unilateral ceasefire. Most of the factions agreed to the ceasefire but retained weapons and moved to safe camps.  A neutral “ceasefire monitoring group” was formed  to monitor the agreement and defuse grievances of all  warring  groups. There was  peace from 2001  to  2014.

NSCN-K Chairman, SS Khaplang also died on 10 June, 2017 leading to a further split in his organisation into four sub-groups NSCN- KK (Khango Konyak) ,  NSCN (Reformation), NSCN (KN) Kitovi /Neopao Konyak) and the original Burmese Naga cadre based  NSCN  (K) which was commanded by  Chairman Yung  Aung  after the demise of Khaplang. On 28 July 2020,  Nyemlang  Kuntal  was appointed as the new chairman of NSCN (K).

On 03 August, 2015, in the presence of Prime Minister Narender Modi, Naga Framework, a landmark agreement, was signed between NSCN (IM) leader Th Muviah,  other Naga leaders and the Union of India. It called for a peaceful solution of the issue. The new leadership of NSCN-IM has taken over in February 2019; Qhehezu Tuccu has been appointed as the new  chairman.

NSCN-R  , NSCN- KN,  NSCN- KK, NSCN–IM,  Naga ho ho, Naga  Tribal Council, working committee of Naga National Political groups, church leaders, all are now on board  for the final peace accord.  The  accord was to be signed on 31 October, 2019, but it was postponed due to certain unresolved issues like Great Nagaland to include territories of west Myanmar and other lndian  states. NSCN-K is still  opposing  the accord. The final date to conclude it was postponed to 15 August, 2020 and yet again for 1 September, 2020. It remains unsigned till date.

The Government of Indian has walked the extra mile more than once to meet the legitimate aspirations of the Naga people. It has done so in accordance with its “Look East” policy and on realisation of the need to integrate the region seamlessly with India for the sake of its development and prosperity.  It is now up to the many stakeholders to shed their internal contradictions and find an equitable resolution within the framework of the Constitution of India. A new and radiant dawn of  tranquillity can be seen on the north eastern horizon but some clouds  still remain.