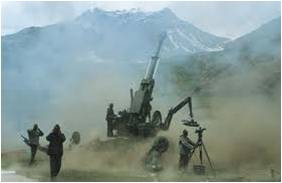 The Nation is gearing up for elections in some very prominent States; this is heralded as the harbinger of the forthcoming Lok Sabha elections. Intense political activity and smooth elections reflect the maturity and deep roots of the country’s fledgling democracy. They prove to the world the collective strength of India as a Nation. A sound economy and a vibrant civilization provides to the country significant leverage as a region of prominence in world affairs.

The role of the Nation’s Armed Forces gains significance in this surge to gain global prominence. Are the Armed Forces of the Nation capable of meeting the challenge of a changing spectrum of conflict now dominated by asymmetric warfare, counter insurgency, counter terrorism and a host of other threats? Are the parameters for transformation of the force in place? Such questions are gaining centre stage in strategic discussions with respect to the role of the Armed Forces in the Nations quest to become a significant world power.

There are, of course, no easy answers to these questions but a benchmark can be laid down by considering the international environment in general and the environment in our immediate neighbourhood in particular. It is a well established fact that international relations are not guided by strong and sustainable laws and regulations. Despite the institution of international bodies like the United Nations and global advocacies of nuclear non-proliferation, respect for sovereignty etc, Nation states continue to give primacy to self interest as against the interest of humanity and the world as a whole. This is the reason behind the hundreds of conflicts that are on across the world at any one point in time.

The immediate Indian neighbourhood, in particular, is fraught with inimical designs and maverick attitudes. Both Pakistan and China are reluctant to grant to India any credit for being a non-aggressive nation, they are in fact conniving to build up a military capacity which can force a submissive posture on the country. Under the circumstances, force becomes the most important factor in meeting the National aspirations of a world status. Whether it is used, not used or partially used is a different subject altogether.

It is also a fact the Indian Army has not been called upon to fight a full-fledged war for the last three decades, the Kargil war being a localized conflict. At the same time, its involvement in containing insurgency and terrorism has been put to test frequently in Jammu and Kashmir and the North East. The force adapted admirably to the changed scenario albeit without resorting to major structural and doctrinal changes. The Army continues to look upon itself as a conventional force while performing asymmetric duties as addendums and peripherals. Such responsibilities are being taken on with considerable reluctance as is evident from the Army’s emphatic “No” to a role in containing left wing extremism. In the case of Jammu and Kashmir and the Northeast, it justifies its involvement on the basis of geo-strategic imperatives. Both regions constitute of frontier states and both are in the grip of foreign sponsored terrorism from across the border.

Be that as it may, it does not augur well for India to allow a rogue state in its neighbourhood the freedom to export terror in the Nation without being punished for the same. Jammu and Kashmir has suffered because of the neighbours evil policies for many decades, entire generations have been smothered under the shadow of foreign sponsored violence. Ways and means have to be found to change this status. The world has to be made to sit up and take notice. It also does not augur well for India to be guided by world opinion or media pressure built through money power so far as its security threshold is concerned. India has its own interests to look towards and these are unique in view of its geo-strategic location, its potential and its aspirations. The future of the country is hinged on its capacity to integrate use of military forces in statecraft.

The world has to look towards India with respect and this respect will come by only if its growing economic power, its high moral threshold as an old civilization with a modern, secular, democratic, liberal, outlook is supported by a strong military posture. The Nation has to support its forces in the quest to meet the emerging challenges. An inability to do so may create a critical situation whereby the sovereignty and future of the country would be at stake. Historically, foreign powers have over powered the sub continent many times, more out of greed than any ideological reason. It cannot be taken for granted that the same will not be attempted in the future. In fact, now the options for creating a divide have increased, the Nation can be weakened from within without any physical intervention.

The role of the country’s Armed forces has to be in sync with the national threat perceptions. The forces need to constantly upgrade their capabilities so as to stay prepared to further national interests. They cannot shy away from attaining proficiency and capability to meet the challenge as it exists today or will emerge in the future, since, an inability to do so will lead to their irrelevance with disastrous consequences for the country. The time has come to apply concepts of transformation, go for proactive modernization and boost production of indigenous military hardware. The forces need to be given as much attention as is being given to the stock exchange, elections etc. It has to be clearly understood that Military might is the fulcrum around which the bright future of the nation is hinged, this is an areas which deserves maximum attention.