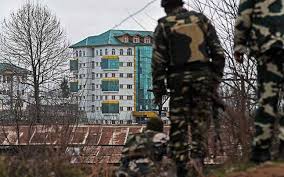 For the second time in this year, a group of terrorists took refuge in the Entrepreneurship Development Institute (EDI) building at Pampore. The counter terrorist operation lasted from almost three days before the two holed in terrorists were eliminated. In the earlier instance in February this year, one civilian, three soldiers and two paramilitary troopers lost their lives before three terrorists were shot dead.

Why do security forces take so long to eliminate terrorists in such instances? The answer to this question was given most aptly by Maj. Gen. Ashok Narula, General Officer Commanding, Victor Force, under whose watch the counter terrorist operation was conducted.

“We did not want any collateral damage. So it took us time. There are 60 rooms in the building. That is the reason (we) took time to clear every room,” he said in a press briefing post the operation

On the flip side, it would be logical to assume that terrorist groups have been directed by their masters in Pakistan to get into this building. The intention is to ensure destruction of the same in the hands of the Indian Army and thus give it a bad name for razing down an institution which is providing for the future of the Kashmiri youth. A perfect set up for propaganda that the enemy is so good at.

One is reminded of the instance, more than two decades back and also in the month of October, when terrorist forcibly occupied the revered Hazratbal shrine which houses a hair of the Prophet Mohammed (PBUH).

Initially it was believed that 30 to 40 terrorists had gained access to the shrine but later it emerged that there were only six to seven terrorists and the remainder were civilians.

Despite grave provocation the Indian Army preferred to lay siege for over 15 days so as to ensure that no harm came upon the holy relic as well as the shrine.

Since there were civilians inside the Supreme Court ordered supply of food on a regular basis.

The terrorist action received full support from the all Party Hurriyat Conference (APHC) which organised mass protests across the valley in favour of the terrorists and against the security forces deployed around the shrine.

Finally, the terrorists opted for a negotiated deal to leave the premises unharmed and were given a safe passage out by the security forces as promised.

The government of the day led by Prime Minister PV Narasimsha Rao faced a lot of criticism for this soft approach, but in hindsight it has become clear that the need of saving the shrine and the hostages was much more than neutralising the terrorists.

When the siege was going on, the environment was rife with rumours of insurgency gaining momentum and the government being on the back foot. The APHC gave constant assurances of the so-called Azaadi  (Freedom) being round the corner. Nothing of this sort happened.

The decision of the terrorists to opt for safe passage over martyrdom in the holy shrine for their cause caused considerable loss of face for them, their organisation and the APHC, in the eyes of the people of Kashmir. The Kashmiris were certainly not appreciative of the terrorists using the shrine most sacred to them merely as a hideout.

In less than two years after the incident, Idris Khan, the leader of the Jammu and Kashmir Liberation Front (JKLF) who negotiated the safe passage for his colleagues, was killed in a gun battle with the terrorist organisation Hizbul Mujahideen (HM) near the gates of the same Hazratbal shrine. Thus, revenge was extracted for having deceived the cause.

Terrorists and divisive forces have always shown scant regard for the sentiments and the aspirations of the people of Kashmir. They have exploited the faith as well as the well being of the people for their personal gains and ambitions.

Every now and then they get an opportunity to mislead some section of the Kashmiri society and they exploit the same to the hilt. If it was the holy Shrine of Hazratbal 23 years back, it is the killing of the terrorist Burhan Wani now. Their evil designs gain momentum for some time; then the propaganda element gets exposed and they land up with egg on their face.

This time round it is not going to be any different; every hand that these evil forces are playing out is being offset by righteous action on the part of the security forces and the government.

The security forces are, as always, showing admirable restraint in the face of grave provocation and the government is dealing with the situation in a very mature manner.

It is for this reason that the wind has blown out of the sails of the latest conspiracy hatched by the divisive forces. Terrorist attacks stand avenged; terrorists are on the run in the face of aggressive action by the security forces; the unrest engineered in an evil, malicious manner has been contained and normalcy is being restored; sane voices are gaining centre stage again.

The people of Kashmir have demonstrated their desire for peace and development over and over again, it is sad to note that the perpetrators of evil are not respecting the wishes of the very people whom they profess to represent. They constantly come up with innovative ways to disrupt life and cause untold misery to the common man.

It is time now to understand the machinations of these evil, foreign sponsored powers and stand united to ensure that they do not succeed in their malevolent designs in future.

(Mehtab is a US based Engineer, analyst and columnist)