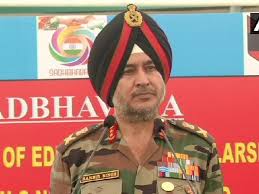 “Indian Army is a very potent, responsive and accountable element of national power. It remains committed to be able to take on any challenge as far as external threats are concerned and similarly take on any internal disturbances when called upon to do so. So, as far as the Army is concerned we always carry on in a professional manner and a very strong code of conduct and we have been doing so ever since army was employed in counter terrorist operations in 1990,” said Lt. Gen. Ranbir Singh, the General Officer Commanding-in-Chief of the Northern Command which is responsible for the northern military theatre of the nation, comprising of the state of Jammu and Kashmir.

The General was speaking to the media on the sidelines of a function held at the Command Headquarters in Udhampur to present financial aid to 71 selected students from below poverty line category and belonging to the remote areas of Jammu and Kashmir.

The financial aid provided under Sadbhavana, a welfare initiative of the Army, included scholarship to the tune of Rs 1.45 crores. The 71 students (45 for Army Public School, Beas and 26 for Drona Boys Hostel, Udhampur) were handed over the scholarship certificates and cheques which cover the complete expenditure of their schools to include education fees, boarding, lodging and transportation.

Speaking on the occasion, the Army Commander said that Army would do everything possible within the ambit of Sadbhavana to assist the civil population of J&K, especially those who are affected by terrorism. “So far as Operation Sadbhavana is concerned, it was conceived to ameliorate the suffering of the people living in remote, inaccessible areas and affected by the military operations. Its success is in front of you. So many children who have been trained under the initiative have grown to become very useful members of society,” he said.

The event also provided an opportunity to take stock of the situation in Jammu and Kashmir. The General gave an assurance that the Indian Army was fully prepared to thwart each and every inimical action by Pakistan and the country will not be able to succeed in its designs. “They dare not try and come anywhere near the line of control to carry out any kind of action. Our deterrence and articulation of our military strategy is very clear. Should there be any misadventure by Pakistan, they will be given a befitting reply,” said the General while asserting that the Indian Army has the capability, the resolve and the operational plan to take on any challenge from Pakistan whenever it may arise.

The Indian Army is maintaining a strong counter infiltration grid on the border to ensure that no infiltrators can get in. In the hinterland, the counter terrorism grid is potent enough to facilitate incisive operations on the basis of credible intelligence and neutralise terrorists.

During this year the security forces have been able to neutralise 86 terrorist and operations continue. 20 terrorists have been apprehended during this period. A welcome development is that the initiative by the security forces to involve parents, teachers and other prominent members of civil society in an attempt to wean away young boys misled into the fold of terrorism has witnessed a fair degree of success with a large number having rejoined the mainstream.

The General Officer attributed the conduct of free, fair and peaceful general elections in the state to the unrelenting efforts of the security forces and the civil administration. Those who came out to vote strengthened democracy and chose their representatives for the highest seat of legislative power in the country.

Gen. Singh also confirmed that the Indian Army considers the surgical strike of September 2016 to be the first operation of this nature carried out against Pakistan. To substantiate his point, he referred to a reply to an RTI by the Director General Military Operations (DGMO) of the Army which has confirmed that the first surgical strike happened in September 2016. “I don’t want to go into what political parties say, they will be given an answer by the government. What I have told you is a statement of fact,” he said.

The interaction by the Army Commander and his views on various aspects concerning Jammu and Kashmir will assist in the build up of the policy of the new Government once it take oath of office. Even the NDA government, which is most likely to be sworn in, will wish to reassess its Kashmir policy and bring about certain changes that are in tune with the current realities. These realities have been articulated in great measure by the Army Commander.

The prime minister of Pakistan, Imran Khan, has for long been laying the foundation for resumption of talks, toward which end, he has made many overtures. In consideration of the strong position that India has with respect to the security situation, the talks should been carried out from a position of strength and righteousness. The successful conduct of the general elections builds the confidence to hold the state assembly elections also on an early date. The political leadership of the valley would be well advised to take a leaf out of the “Winning Hearts and Minds’ (WHAM) initiative of the army.  It provides succour through the welfare initiative, Operation Sadbhavana, in a manner that gains the confidence of the common man.

It is quite apparent from the articulation of Lt. Gen. Ranbir Singh that the security forces have, yet again, created an environment of peace wherein political activity is possible; it is now up to the political leadership to leverage the same and apply a balm on the open wounds of the people who have been traumatised by violence and disruption for decades on end.