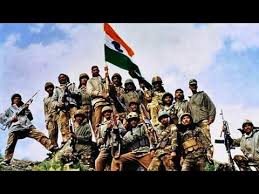 ‘‘I have confidence in the ability of our armed forces. The armed forces shall accomplish this task and ensure that no one dares to indulge in this kind of misadventure in future,” said then Prime Minister Atal Bihari Vajpayee in an address to the nation on June, 7, 1999. Thus, was put into motion the Indo-Pakistan conflict of 1999, commonly referred to as the Kargil War.

The war was necessitated due to Pakistan’s ignoble attempt to occupy the Kargil heights in Indian territories with the objective of isolating Ladakh and thereby occupying the Siachen Glacier and at the same time opening a route for ingress of militants into the Kashmir Valley. The plan was spearheaded by General Pervez Musharraf, then Chief of Army Staff of the Pakistan Army.

Nineteen years have elapsed since the fateful day, 26 July 1999, when India emerged victorious in the Kargil War – a historic military epic fought at heights over 16000 feet and temperatures as low as minus 15 degree Celsius.. The ignominious designs of a belligerent neighbour (Pakistan) to violate the territorial integrity of the nation were thwarted by a military action that has no parallel in the annals of military history.

Kargil  War was thrust upon India! It lasted for almost three months and culminated with Pakistan lamely announcing the withdrawal of its battered troops when there was very little left to withdraw.

The response of the Indian Amy to Pakistani belligerence was politically righteous and militarily courageous beyond the call of duty. That the entire nation stood behind the government and the soldiers of the Nation is what made the victory even more enduring. The restraint and maturity shown by the country won for it international acclaim and moral ascendancy over Pakistan.

As the nineteenth anniversary of the war approaches, it would be appropriate to revisit the treachery, duplicity and deceit that went into its planning and execution by Pakistan. Even as India was being feted with an olive branch by Pakistan, the latter’s troops were already on their way to stealthily occupy Indian territories. Pakistan went into the war with a fair realisation of the risks and gamble involved. An eminent Pakistani writer, Altaf Gauhar, has suggested that contingency planning for the Kargil conflict was formulated way back in 1987. The plan, however, was set aside as militarily untenable and irrational as also internationally indefensible. Why then did Pakistan decide to take this gamble after twelve long years? The reason was the then Chief of the Pakistan Army, General Pervez Musharraf! He had been part of the initial planning and had all through considered the plan to be operationally tenable.

The Pakistan Army, under the leadership of General Musharraf, factored in a normal winter, a weak and vacillating Indian reaction, a strong element of surprise, and most likely a strong international intervention for fear of a possible nuclear escalation. All tenuous probabilities not based on rational analysis. The then Prime Minister, Nawaz Sharif, has gone public to acknowledge complete lack of information about the operation; Benazir Bhutto openly condemned the same.

Having decided to launch the operation, the Pakistani leadership sent in troops of the Northern Light Infantry (NLI) for the same. The NLI comprises exclusively of troops from Pakistan Occupied Jammu and Kashmir. Being from a backward and underdeveloped area, their education levels are low. They are hardy, innocent and well disciplined troops who exude a great sense of loyalty. However, they are looked down upon by their Punjabi counterparts and are given a status of low grade soldiers. It is these troops that the Pakistani military hierarchy decided to sacrifice at the altar of its unsustainable ambition. They were, in other words, cannon fodder.

A captured diary of a Captain serving with one of the NLI units, tells a chilling story. He was in the vanguard of the operation launched in February when winter was at its peak. Only trained mountaineers, specially clothed, equipped and rationed could have risked a passage in the treacherous terrain. The Captains untrained and ill equipped column lost eleven men in the approach march itself. The remainder suffered terrible physical torture.

The Indian army was not prepared for duplicity of this nature. There were shortages to contend with which compelled the then Indian Army Chief, General VP Malik to ominously state, “We will fight with what we have.” Despite the handicaps, the Indian response was swift and more importantly, abounding in courage. The tactical advantage of the enemy sitting on high ground did not deter the resolve of the Indian soldiers to throw him out of Indian soil.

No sooner was the battle joined, the intruders realised the harsh reality of the treachery of their own leaders.  The result for this hapless body of troops was an ignominious death under conditions of great deprivation and humiliation. Even after denigrating their loyal troops in such a dastardly manner, Pakistan declined to receive the bodies of its regular soldiers from the Indian side. The country took eleven years to acknowledge that it lost soldiers in the conflict. In November, 2010, it listed on its official website, the names of 453 soldiers and officers as killed in the operation. The actual figure, according to informed sources, was well over 2000. The abject failure of the plan conceived and implemented by General Pervez Musharraf, code named “Operation Badr,” catapulted him to the dictatorship of his country – such is Pakistan and such is the Pakistan army.

The courage and commitment exhibited by the Indian soldiers in the short, swift and brutal war in which no quarter was given or sought has been summarized most aptly by Prime Minister Narendra Modi by his statement, “India will never forget the fearlessness with which our courageous soldiers gave a befitting and unforgettable reply to the intruders….. On Kargil Vijay Diwas I bow to every valiant soldier who fought for India till the last breath. Their heroic sacrifice inspires us.”

(Jaibans Singh is a Delhi based security analyst)