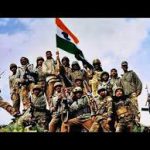 Jaibans Singh ‘‘I have confidence in the ability of our armed forces. The armed forces shall accomplish this task and ensure that no one dares to indulge in this kind of misadventure in future,” said then Prime Minister Atal Bihari Vajpayee in an address to the nation on June, 7, 1999. Thus, was put into motion the Indo-Pakistan conflict of 1999, commonly referred to as the … END_OF_DOCUMENT_TOKEN_TO_BE_REPLACED