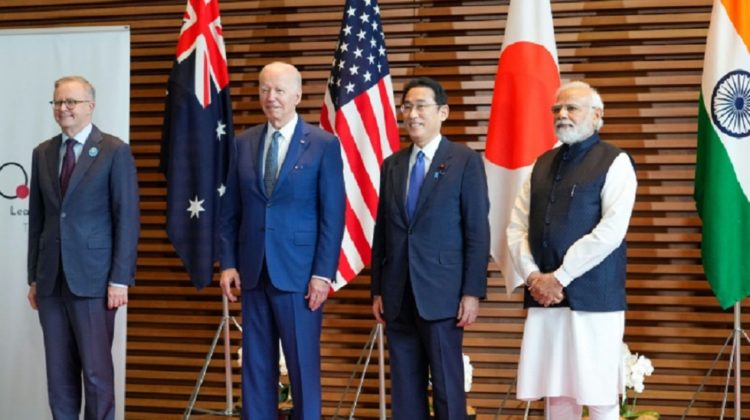 The May, 24 meeting of QUAD leaders at Tokyo  for the second person-to-person summit has activated the strategic community worldwide into speculation about the global power play in the region, including the Asian mainland and the Indo-pacific. The main issue that is being contemplated is the possibility of China too being confronted with a two-front threat, as India has been since the last many decades.

The development has come at a time when the possibility of a face-off between the People’s Liberation Army (PLA) of China and the Indian Army gains momentum all along the Line of Actual Control (LAC) in both the Ladakh and the Arunachal Pradesh sectors.

It is now more than two years since the big face-off in eastern Ladakh in which China was compelled to back-off from its military misadventure due to an aggressively professional  response by the Indian army at Galwan and complete domination of the Thakung post and Renchin La heights located close to the Spanggur Gap. The domination of the Spanggur Gap was accomplished by an elite unit of the Indo Tibetan Border Police (ITBP) called Force VIKAS which comprises of troops from the Tibetan community in exile in India.

Ever since the face-off, both countries have built on the troop strength in terms of boots on ground supported by mechanised elements, state-of the art aircraft, anti-aircraft equipment etc. The situation is tense and volatile.

It has been seen in the past that China reacts strongly when India exhibits a bent towards the United States. Such a situation is quite prevalent at the moment  which gives to China a feeling that India has become a prominent player in the US containment policy so far as Taiwan is concerned.

The situation, therefore, is prime for China to apply its policy of “two steps forward, one step back” – leaving  it with the net gain of one step. The inhibiting factor is the fear of a two front confrontation with the Taiwan issue also getting activated, something that the US is not averse to. How China will get past this dichotomy will be clear from its actions in the coming months

Coming back to the QUAD meeting, the leaders renewed their “steadfast commitment to a free and open Indo-Pacific that is inclusive and resilient.” The joint statement touched a number of issues  that the world is seized with today, mainly the Ukraine crisis, the situation in flashpoints like North Korea. Myanmar etc and the security scenario across the world with special reference to the Indo-Pacific. Undoubtedly, the leaders would have discussed confidential issues pertaining to security of their own nations and the emerging threat from China.

China was quick and acerbic in its response . The country roundly criticised the summit and said that member countries were attempting, “coercive, provocative or unilateral actions that seek to change the status quo and increase tensions in the area, such as the militarization of disputed features, the dangerous use of coast guard vessels and maritime militia, and efforts to disrupt other countries’ offshore resource exploitation activities.” “Building small cliques and stoking bloc confrontation is the real threat to a peaceful, stable and cooperative maritime order,” said the foreign ministry in its rather long exposition on the summit.

Clearly the battle lines are drawn, which does not imply that there would be military intervention, but definitely the tension will remain and some reaction will come from China. The first step that has been taken by China is an effort to establish its supremacy is attempting to control island states in the Indo-Pacific like Micronesia, Melanesia and Polynesia. Under the garb of “development, peace, security and stability” China is attempting to forge alliances that will give to it literal control over the land mass as it has done in Pakistan through the China Pakistan Economic Corridor (CPEC). China always attempts to control both communication and infrastructure and this is the game-plan for the island nations too.

It would be worthwhile for the QUAD countries, mainly India, to remind these island states about the failure of initiatives like CPEC and other projects under the Belt-Road Initiative (BRI) which are facing acute problems including increase in financial outlays and possibility of debt traps with very less benefit for the countries that have accepted the proposal.

China is attempting to show muscle through a massive exercise to reshape its military with the introduction of technology and what it terms as “smart soldiers.”  This is in line with the two front threat that the country has now realised.

China is also quite engrossed in its domestic woes that have further aggravated due to a financial meltdown caused by mismanagement of the COVID pandemic. Though there is no information coming from behind the iron curtain, yet, there are enough indicators to the fact that the declaration of victory over the virus was premature and issues continue to plague the country much more so than the rest of the world, especially India, where the robust vaccination programme has brought about conditions of near normalcy. The aging population in China is also adding to the problems by bringing about a drastic decrease in the work force.

As President XI Jinping launches his campaign for the totally unprecedented third term it is apparent to all except the Chinese (who hardly have a say) that his arrogance has only isolated the country from the rest of the world and that basically he is a failed leader.

The current Chinese situation poses for India an opportunity as well as a huge challenge. The opportunity lies in exploiting the weakened China with robust diplomatic, financial and strategic initiatives. The challenge lies in correctly assessing the possibility of a military misadventure by China to strengthen the position of President Xi Jinping.

India has to be quite clear that it may be called upon to assist QUAD in countering Chinese military moves against Taiwan but when it comes to the LAC it will have to fight on its own. Overall there is no room for complacency when dealing with China, be it the diplomatic or the military front.