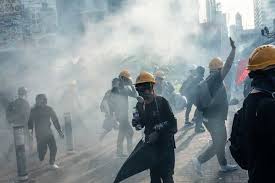 China is not relenting from assisting Pakistan in its unsubstantiated posture on Kashmir. Chinese diplomats are making highly objectionable statements and attempting to raise the issue in international forums like the United Nations. China, further, is attempting to leverage the situation to once again highlight its covetous claims on Ladakh. Just a few days back, there has been a clash of patrolling parties of the Indian and Chinese Armies in Ladakh. Fortunately, the situation was controlled at the local level by the military commanders on ground on both sides.

It is surprising that China, a responsible world power, is supporting Pakistani manipulations to interfere in the internal affairs of India despite most other nations refusing to get embroiled in what they perceive to be an internal matter for India. Alongside, it is also attempting to leverage such territorial claims over India that are both illogical and offensive.

In this melee, a more serious situation developing as a result of the mainland China-Hong Kong face off is going relatively unnoticed, especially so in India. It is quite incredulous to note that while China is supporting Pakistan’s blatant interference in the internal affairs of India so far as the state of Jammu and Kashmir is concerned it is using the most insidious methods to curb the liberties of the people of Hong Kong despite have given an assurance to respect the same.

To recollect, more than two decades back in 1997, when Hong Kong was to be handed back to China by the British on expiry of a 99 year lease the then “Paramount leader” of China, Deng Xiaoping, assured application of a policy of “One Country, Two Systems” which meant that Hong Kong would continue to have a de facto constitution called “Hong Kong Basic Law”, which would assure a high degree of autonomy to the region. The law came into effect on 1 July 1997.

On paper this autonomy exists but, in line with the Chinese mastery of political double speak, the rights of the people of Hong Kong are being tampered with. The Chinese high command has successfully manipulated the elections and put in their puppets while sidelining those who favour democracy.   There is talk of sudden disappearance of intellectuals, businessmen etc who are seen to be going against Chinese interests. Even visits of foreign media are being subjected to scrutiny. Mainland Chinese visiting Hong Kong are brutish and arrogant in their behavior.

The people of Hong Kong are unwilling to take all this lying down, while protests have been going on off and on since 1997 they have gained considerable momentum of late. Protestors are demanding the resignation of Hong Kong’s pro-Beijing executive and holding of free and fair elections. Hong Kong erupted at a mass level in June this year in protest against the Chinese attempt to strengthen its extradition powers. There were clashes at the Hong Kong International Airport. There was unprecedented and very embarrassing booing witnessed while the Chinese national anthem was playing in a football stadium. A song, “Glory to Hong Kong” written by a local musician has become the unofficial Anthem of the city and is being sung openly in flash events in Shopping Malls etc; the lyrics include lines such as “Do you feel the rage in our cries? Rise up and speak up” and “persevere, for we are as one.” There are human chains being formed by as many as 200,000 people and the street protests are recording a turnover going to more than 1.5 million. The Hong Kong polices is hard pressed in containing this mass protest.

The Chinese authorities are looking at “threat of force” as an inhibitor for the spread of the movement. The Chinese government has mobilised the Army towards Hong Kong and is now terming it as normal training activity. The malevolence, however, was not lost to anybody. While flexing muscle China is terming the protest activities as “atrocity” and “acts of terrorism.” This flexing of muscles, however, does not seem to be having any effect on the people.

Protest activists are attempting to create international awareness to their cause, especially so in Europe and the United States, much to China’s chagrin. The Hong Kong Diaspora is very active especially so in the United States where it is lobbying for Congress to pass a legislation that would enable US economic sanctions on China and the local government of Hong Kong.

President Donald Trump has remained reticent in speaking about Hong Kong but did tweet in August saying that if China wishes to reach to a trade deal with the US it should treat Hong Kong humanely first.  The Hong Kong protestors in Washington have considerably upped the ante by calling upon Trump to “liberate Hong Kong.” China has naturally issued a warning. “Foreign legislatures to should not interfere in any form in the internal affairs of the island,” it says.

Chinese President Xi Jinping does not seem to be in any hurry to accede to the demands despite the protests getting into the 13th week now. He however will need to decide upon a concrete policy to deal with the situation. China has been prone to the use of force under such circumstances, as was seen at Tiananmen Square, but Hong Kong is a different ball game altogether. A break down there will have huge financial repercussions that will shake mainland China too.

It would be so much better if China would desist from pontificating on issues like Kashmir and at the same time using brute force to subdue the legitimate claims of its own citizens. Such duplicity does not suit its stature as a world power. Pakistan is in no position to assist China in any manner and especially so far as Hong Kong is concerned, but India has a potential to play a crucial role. It is something that China should understand.

(Onkareshwar Pandey is a senior journalist and author)