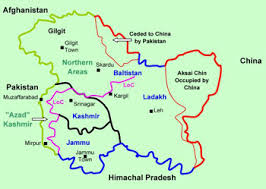 The people of Gilgit-Baltistan are gearing up for a sustained resistance to the infamous China Pakistan Economic Corridor (CPEC) that is to pass through their land. There are reports of massive demonstrations against forcible land grab being carried out in the tune of thousands of acres by the federal government agencies, especially so, the notorious Inter Services Intelligence (ISI) for the project.

What is significant in the present situation is the determination with which the people are voicing their dissent even as the CPEC continues to move forward at full throttle.

“Thousands of acres of land worth billions illegally allotted to Pakistan’s Inter Services Intelligence (ISI) and the Force Command Northern Areas (FCNA) shows ample testimony to the fact that state owned and non-state owned land is being sold to the Pakistan army at throwaway prices,” says Ghulan Shah, a local leader in Gilgit.

The people are no longer taken in by the by the rosy announcements by politicians about prosperity and employment visiting the region once the CPEC is functional. This is apparent by the fact that the Army is now being used to forcibly acquire the land from the locals and they are demonstrating against the illegal act.

In a specific instance, residents of village Maqpon Das in Tehsil Denyuore of Gilgit filed a complaint against the officials of their area of forcible acquisition of land that had been in their families for generations. The matter was reported in Dawn, a prominent daily newspaper of Pakistan. Such incidents demonstrate acute disaffection in the region that is now, for the first time, finding coverage through national media.

The activists of the region living in foreign shores are vociferous in condemning Pakistan’s evil design to exploit the region illegally and against the wishes of the people. They have been carrying out protests in front of the United Nations’ headquarters in Geneva to sensitise the international community about the sad plight of the people..

Opposition parties like the Pakistan People’s Party (PPP) is also raising a voice in favour of the people, for whatever it is worth. There are reports of the party having initiated a movement called “Haq Malikaan” that is intended to increase awareness among the locals about the need to ask for adequate compensation from the government for the land being acquired. PPP leaders like Amjad Hussain are openly motivating the people to rise against “Pakistani Occupation.”

The PPP’s concern is, of course, a classic case of “pot calling the kettle black,” but for the beleaguered people of the region it amounts to, “a drowning man clutching at a straw.”

The positive take away is that the plight of the people is no longer being kept under wraps as it was earlier when subjugation of the region was a unanimous agenda of all political parties as well as the all powerful Pakistan Army.

The government’s ambivalence towards the protests makes it clear that it is scripting a sophisticated game plan to assuage Chinese apprehensions about the security of the CPEC. The move to amalgamate Gilgit-Baltistan is yet another important prong in this strategy. In the eventuality of the region being amalgamated as a Province of Pakistan the government will be in a position to send in more forces, especially the army, to safeguard the CPEC corridor and also provide a guarantee to China of its legal right over areas from where the corridor will run.

The evolving situation, however, raises many questions about the feasibility of the CPEC that is seen as a game changer for Pakistan. Many experts feel that the project, instead of being a game changer, will spell doom for the country.

It is well known that it will originate from East Turkistan which is an occupied territory in China, pass through Gilgit-Baltistan which is not only occupied but also disputed and end in Balochistan which in the throes of a full blown insurgency. This is, by no means, an appropriate situation for any business that calls for huge investment and sustenance through difficult terrain over long distances. Security will pose a colossal challenge and the Pakistan Army will face tremendous pressure.

Pakistan is in a precarious financial condition with no friends other than China to bail it out. It has no money to service its existing debts and is getting ready to take on a huge additional financial burden. CPEC will increase the debt burden to an unacceptable level. This will lead to loss of sovereignty for Pakistan and forfeiture of more areas to China mainly from Gilgit-Baltistan.

Pakistan has already illegally ceded the 2000 sq miles Shaksgam Valley of Gilgit-Baltistan to China in blatant disregard to its disputed nature with India. India needs to be alive to the serious situation that is likely to unfold with a possible ceding of more territory in region.

Sadly, India has failed to take credible steps in the international forums to establish its historic right over the region and demand its return. Successive governments in India since independence have chosen to remain silent spectators with regard to the oppression and atrocity that is being heaped on the people of Gilgit-Baltistan by Pakistan. This procrastination is difficult to comprehend.

An ostrich like approach by India will have disastrous implications. Further procrastination would signify India’s acceptance of Gilgit-Baltistan as Pakistani territory?

A course correction coupled with a proactive policy of nurturing the growing pro-India constituency in Gilgit-Baltistan is the need of the hour. Prime Minister Narendra Modi has the stature and the will to change the narrative, all hope is now vested upon him and his government. It is time for him to use his goodwill to the benefit of the deprived people of Gilgit-Baltistan. All eyes are now honed on to the position that the NDA government will take with respect to Gilgit-Baltistan.

(The author is a US based engineer and columnist)