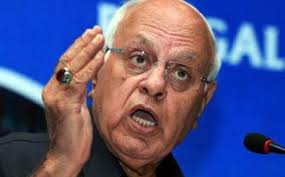 Age does not diminish a father’s urge to protect his son; this has been amply proved by Farooq Abdullah, the patron of the National Conference of Jammu and Kashmir that is sitting in opposition and not liking it one bit.

In an immature bid to boost the withering relevance of his son, Omar Abdullah, Farooq Abdullah has made some controversial statements in the past few weeks. He has, in effect, sold his soul to the devil simply to focus media limelight on to his son and also reached out to the separatists in Kashmir who have, for long, been anathema to him.

More significantly, Farooq has targeted the Indian Army, an organisation that he has always held in high esteem.

“Even if the entire Indian Army is deployed in the state, it cannot defend people against militants and terrorists,” Farooq Abdullah is reported to have said.

A statement of this nature coming from someone like Syed Aii Shah Geelani is quite understandable. When, however, a seasoned leader like Farooq Abdullah, who has been chief minister of the state and the chairman of the Unified Command, says something like this, it touches a sensitive core of all nationalists.

Even a child in India knows that it is the Indian Army that has saved the people of Kashmir from the evil designs of Pakistan, not once, but on many occasions.

The first instance came immediately after independence when the Army, in a unique display of courage and commitment, saved the people of the state, especially in Kashmir, from the genocide of Kabili mercenaries from Pakistan and drove them back.

Pakistan then unleashed terrorism at an unprecedented scale in the early 1980’s, in accordance with the “policy of a thousand cuts” meticulously conceived by its dictator, General Zia-ul-Haq. Pakistani terrorists took advantage of the porous borders and some local help to infiltrate in thousands. They first engineered the exodus of the Kashmir Pundit community and then turned their eyes on to the Muslim population. The atrocities perpetrated on the poor people, especially of far flung rural areas, by these Jihadis are unspeakable to say the least.

It is to the credit of the Indian army that it stood steadfast in the face of this evil onslaught. It never lost faith in itself and in the people and it fought a grim battle over two decades to eliminate the terrorists and usher normality.

Today, terrorism in Jammu and Kashmir is a small shadow of its formidable strength two decades back. Terrorist operations have been restricted to the Kashmir valley and the numbers have dwindled from thousands to a little over a hundred.

It is also well known that, in this fight, the Indian army triumphed because of the unstinted support of the local people who were fed up of the terrorist atrocity and ready to risk their very lives to rid themselves of this menace.

The remnant of terrorism in the state is very much in control of the security forces with the police of the state now playing a major role.

The army is continuing with its deployment, not because there is a credible threat of terrorism in the state, but because the capacity and intention of the neighbouring country has not seen any change. Pakistan would exploit the slightest opportunity to resurrect the cult of terror in Jammu and Kashmir, for which reason the Indian Army cannot afford to let down its guard.

A second statement by Farooq Abdullah, made around the same time, was equally disappointing. “PoK is in Pakistan and will remain; J&K is in India and will remain. We need to understand this,” he said.

Having been chief minister and Member of Parliament, Farooq Abdullah is well aware of the Nation’s posture so far as Pakistan Occupied Kashmir (POK) is concerned. Legally and morally it is Indian territory under forcible occupation of Pakistan and it has to be given back to India at the earliest.

A unanimous resolution was passed by the Indian Parliament in 1994, wherein, it was clearly stated that the only outstanding issue between India and Pakistan, so far as Jammu and Kashmir is concerned, is retrieval of such territories that are under illegal occupation of the neighbouring country.

Farooq Abdullah also knows well that in the sixty plus years since independence, successive federal governments in Pakistan have systematically colonised the occupied territories, both POK and Gilgit-Baltistan. A diabolic plan to change the demographic profile of the regions by settling Pathans and Punjabis over there is in place with the intention of totally eradicating its Kashmiri identity. Moreover, its rich natural resources are being exploited for use in Punjab, while its people live in utter poverty and deprivation.

Farooq Abdullah has also emphasised that the Indian state has not been able to press home its claim on the occupied territories or provide moral support to the deprived people who are also citizens of India. There is a lot of merit in this statement and the Government of India should take note of the same. A situation of status quo is neither legally nor morally acceptable.

It would be appropriate for senior leaders of Jammu and Kashmir, like Farooq Abdullah, to focus their energies on to building on the environment of normalcy that has been ushered in Jammu and Kashmir by great sacrifices and loss of innocent lives and finding ways to improve the quality of life of their constituents. Making sensationalist statements for a little cheap publicity is in bad taste for a leader of his stature.

(Dr. Simrit Kahlon is a professor in Punjab University)