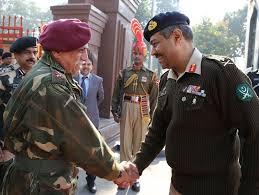 For about three months now the Indian media has been waiting with a bated breath for the meeting between the Director Generals of Military Operations (DGMO) of the Indian and Pakistani armies that was decided upon by the Prime Ministers of the two countries in New York on September, 29. A lot of water has flown under the bridge since then. Pakistan has not relented in its ceasefire violations; Pakistani Prime Minister, Nawaz Sharif, has raised the bogey of another war against India on the Kashmir issue to which Prime Minister Manmohan Singh has given a befitting reply; the all powerful Chief of the Pakistan Army, General Kayani, has finally decided to retire after six long years.

After all this, the Pakistani DGMO extended an invitation to his Indian counterpart for a meeting. The alacrity with which this invite was accepted by the Indian side is incomprehensible. What was the reason for India to go to the Pakistani side for the meeting? India should have insisted upon holding it on its own side. The sagacity of such a move is now apparent when Pakistan has rubbed in the invite as its unilateral initiative towards building bridges with a reluctant India.

The entire exercise has been played out by Pakistan through its media in a very sophisticated manner. The headline of the Express Tribune, a leading English newspaper from Pakistan reads, “Landmark meeting: LOC peace agreed in rare Pak-India army tryst.” The headline carried by Dawn, yet another well established English newspaper from Pakistan, is equally effusive when it reads, “Accord to diffuse LOC tensions.” Most Pakistani newspapers have gone overboard in a similar manner by reporting about “smiling DGMOs” who, “showed their commitment to maintain the sanctity and ceasefire on the LoC and agreed to re-energise the existing mechanism.” Tucked in this effusiveness is the small bit of information (In the Dawn) that says that Pakistan accused India of 416 LoC ceasefire violations while India blamed Pakistan for “about 150 violations” in the ongoing year. This gem has been inserted to be used effectively whenever the need arises. The complete Pakistani press has followed the line of reporting laid out by the Pakistan army which indicates that Pakistan media may be free from political control but when it comes to the army it does what it is told to do!!

The writing on the wall is very clear – after all the ceasefire violations, the infiltration attempts, brutal killings of Indian soldiers and open war mongering by its leadership Pakistan wants the world to believe that it cannot be faulted for what is happening on the line of control (LoC) with India.

Another political and media coup that Pakistan attempted was pushing for a greater role of the United Nations Military Observers Group in India and Pakistan (UNMOGIP). In this regard, a solid media campaign through the Pakistan media and some international websites was laid out as a precursor. It may be recalled that Pakistan made a similar attempt to resurrect this defunct organisation in January this year after the dastardly killing and beheading of brave Indian soldiers in Poonch. The country asked for an independent third party investigation into the episode by UNMOGIP. What needs to be understood is that UNMOGIP became redundant after the Shimla Accord of 1971 when both countries agreed to address the Kashmir dispute bilaterally, negating any role of the United Nations. Pakistan nevertheless had in mind a different game plan; it wanted the organisation to remain so that it could be exploited as and when required. India played in the hands of Pakistan and UNMOGIP continued to function from New Delhi. In the aftermath of the barbaric murder and beheading of Indian soldiers, Pakistan’s strategy of leveraging UNMOGIP became quite apparent.

The Indian DGMO, on his return from the meeting, did not address a formal press conference; he gave a few inane statements to the attendant media to the effect that the meeting was “cordial and fruitful”; both sides were looking forward to “sustaining the ceasefire” and “there are some issues that we are moving forward on.” This can hardly be called an apt media response to the comprehensive, well prepared press release that Pakistan’s ISPR issued to the international press immediately after the meeting. There is a report in Hindustan Times that quotes a senior Indian army officer to have stated that India forcefully confronted Pakistan over the Poonch killing and beheading incident that took place in January this year. This sensitive piece of information was not shared by the DGMO with the nation. It has, therefore, passed off without debate or elaboration.

With no strong statement coming from the ministry of defence the Indian media, already engrossed in the political drama being played out in New Delhi with Arvind Kejriwal getting ready to form a minority government, literally ignored the meeting. So what was for Pakistan a “historic meeting” was for India a non-event; a sad commentary on the national security priority of the country. The end result is that India has lost the psychological and media battle.

In the coming months Pakistan will definitely attempt to leverage the psychological advantage by increasing violence along the LoC and then blaming India for not standing up to the agreement that it has fed to the world so effectively. It would be best not to get swayed by Pakistan generated propaganda of the LOC soon becoming an oasis of peace. If this has not happened after many summits between the top leadership of the two countries, a meeting between DGMO’s can hardly be expected to make a difference. Indian must not relent from ensuring that the sensitive situation in the Kashmir valley does not get compromised militarily. Let us put this “historic meeting” behind us and prepare for business as usual in Jammu and Kashmir.