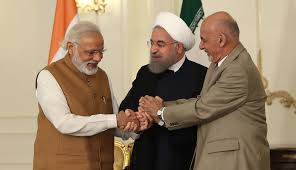 The speed and confidence with which Prime Minister Narendra Modi moved to engage Iran once economic sanctions imposed on the country were lifted speaks volumes about the dynamism in India’s foreign policy under the NDA government.

Surmounting complex diplomatic, political and economic challenges, a tripartite agreement between India, Iran and Afghanistan to turn the Iranian port of Chabahar into a transit hub has been inked during his visit to the country in May this year. Six other agreements for cooperation in various other fields have also been signed with Iran.

“The agreement can change the course of history in this region,” said Prime Minister Narendra Modi, post the inking of the agreement.

Afghanistan looks to be the biggest beneficiary of the project. Being a landlocked country, it has been dependent on the Karachi port for its maritime transit requirements. Chabahar, as an alternate route to the Indian Ocean for Afghanistan, will remove this monopolistic dependency.

Since Chabahar is closer to Afghanistan than Karachi, the transit cost will come down drastically. It is estimated that the reduction in customs tariff and transportation, which stands at USD 3000 for 40 tonnes of foodstuff will come down to as low as USD 200.

Afghanistan has also remained worried about trade through Karachi due to security issues and its blow hot, blow cold relations with Pakistan which remain at a virtual breaking point most of the time.

India, on her part, will get the economic advantage through fast movement of goods and trade, not only to Iran and Afghanistan but also to the Central Asian Republics (CAR). The Kandla port in Kutch, Gujarat is nearer to Chabahar than Delhi is to Mumbai, as pointed out lucidly by Nitin Gadkari, India’s Union Minister for Road Transport and Highways and Shipping.

More significant for India is the breakdown of the Chinese strategic encirclement of the country. China had laid out a “string of pearls” to encircle India through its maritime presence in Gawadar in Pakistan and the Hambantota Port in Sri Lanka. Strategic experts have already coined a new term for the Indian initiative – the outer string of pearls.

China left no stone unturned in wresting this project from India. Development of ports was one of the areas mentioned in the joint statement released after the visit of Chinese President Xi Jinping to Iran in January this year.  Later, high powered delegations from China visited Iran several times and pushed the interest of Chinese consortiums for development of the port.

Pakistan is, of course, not at all happy with the developments.  Chabahar may not be as big in scale as the China Pakistan Economic Corridor (CPEC) project that is based on the Gawadar port but it has a huge strategic and economic implication. The long term plan to link Gawadar to CAR through Chaman may also become economically unviable. In simple terms, Chabahar can bring down drastically the economic potential of Gawadar.

It is for this reason that Pakistan has launched a media and diplomatic blitzkrieg against the deal.  It has played up a purported comment by the Iranian Ambassador, Mehdi Honardost, that the doors of Chabahar, “will be open for Pakistan and other regional nations.”

Pakistan is trying to exploit this broad based diplomatic comment to establish a stake in Chabahar. This, however, is not in the realm of reality.

Iran is quite cut-off with Pakistan for not extending a helping hand when the country was reeling under sanctions. So many projects, including the Iran-Pakistan-India gas pipeline simply did not get off the drawing board due to a lackadaisical approach by Pakistan.

Iran, therefore, may make the right diplomatic noises and may also give some concessions to Pakistan for optimising economic gains from the Chabahar facility, but it will not do so at the cost of annoying India.

Afghanistan has partnered with Iran and India specifically to offset the trouble that it is facing in the Karachi transit facility, it is hardly likely to play ball with Pakistan on this alternative route.

Pakistan is also playing up the apprehensions that US law makers have about India meeting the parameters of sanctions still applicable in Iran. “US lawmakers questions Indian plans for Iran’s Chabahar port,” screamed the headlines of a prominent Pakistani newspaper, Dawn, while other also followed the same drift.

This argument by Pakistan falls flat when the larger picture of US wanting India to contain influence of China in the region is seen. US knows that if India had not taken the project, China would have done so definitely, so, deep within it is quite pleased with the manner in which things have turned out. Accordingly, it has maintained a tacit silence since it knows that what has happened is in its overall interest,

It is very evident that both Pakistan and China will attempt to put roadblocks in the implementation of the project. While being wary of these two countries India will also have to keep the sensitivities of the U.S. and other West in mind. The United States, in particular, has always been and will continue to be an important player in the affairs of the region; its confidence has to be maintained at all costs.

That the deal has been inked does not necessarily mean that the going will be easy. While ensuring that the time frame for implementation is adhered to , India will also have to be very vigilant about interference in implementation by inimical forces. The interference may be political and even in terms of terrorist and subversive activities.

India has got this golden opportunity to engage with Iran and the extended region of Afghanistan and CAR. Strategically, this is only the first step taken by India towards a grand design to outflank Pakistan and challenge Chinese domination of the India Ocean. Now all efforts have to be directed towards ensuring that the opportunity is utilised to the hilt.