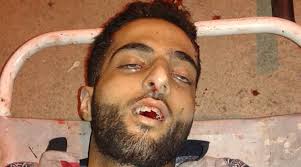 Burhan Wani, a Kashmiri terrorist, was killed by security forces on 8 July 2016 in Kashmir. His claim to fame is that he used social media, especially Face book, to build a persona for himself that was based on a fair degree of romanticism.  His good looks and the disruptive combat fatigues that he wore, along with the automatic rifle that he held, had much to do with creation of this persona.

The disruptive elements and terror mongers sitting within Kashmir and in Pakistan did not take long to assimilate the rock star like potential of Burhan Wani and went all out to exploit it to the hilt.

In a short span of time he became less a terrorist and more a poster boy of the terror machinery. He played a big role in the propaganda and recruitment strategy of his terrorist masters.

His main task was to revive the dwindling fortunes of the terrorist structure in Kashmir, especially of the Hizbul Mujahedeen (HM). He was used as a model to enhance terrorist recruitment. The recruitment drive did pick up momentum but not to the extent that his terrorist masters desired. It was, all the same,  sufficient enough to give some breathing space to the otherwise waning enterprise.

His leaders knew very well that, given his low level of training, it was simply a matter of time before he would be eliminated. They planned to get propaganda advantage from his life as well as his death. The script played out exactly as it was designed. Burhan Wani was eliminated sooner than expected, which gives an impression that his early death was desired by somebody within his set up. It seems that he had reached a stage where he was more valuable dead than alive.

Now on the occasion of his first death anniversary these enemies of the people of Kashmir have planned out a propaganda blitzkrieg. The ball was set by the global terrorist Syed Sallahuddin, who, at the behest of his Inter Service Intelligence (ISI) masters has come up with a one week long programme of disruption in Kashmir which he has named as Hafta-e-Shuhuda (martyrs’ week).

It needs to be noted here that though Syed Sallahuddin passes off as the chief of the HM and Chairman of a high sounding United Jihad Council (UJC) he is, in actuality, nothing more the lap dog of the ISI. He has made this call on the bidding of the ISI that is personally scripting the propaganda battle.

The separatist, always eager for media limelight, would be feeling quite upset at the prospect of Sallahuddin taking away the initiative from them by making the announcement. They will now go overboard in issuing a dynamic protest calendar and get their best clothes ready to take part in prime time television debates.

Pakistan, of course, will lead the pack of Hyenas with one belligerent statement after the other. Last year, on the death of Burhan Wani it declared a “Black Day.” Undoubtedly, it will find some similar phraseology for this year also. In any case it has a number of stooges to bleat in its behalf.

It is really very sad that the common Kashmiris, already reeling under a financial crisis due to a limp tourist season and constant disruption in normal life, will now be forced to bear the brunt of the evil agenda of a few anti-national, anti-Kashmir and anti-social elements.

The repercussion will be felt most by the lower segments of the Kashmiri society. It is the honest shopkeeper, the restaurant employee, the taxi driver, the tourist guide, the daily wager who will be left deprived and whose suffering will be slow and agonising.

This occasion will also be utilised to give momentum to the terrorist recruitment process since there is palpable desperation to revive terrorism, at least in Kashmir, if not in the complete state.

Regardless of the propagandist tone and tenor, the first and foremost reality is that Burhan Wani was a terrorist, an enemy of the state who carried an award of Rs10 lakhs on his head. His life was marked and his death inevitable. He knew it, his parents knew it and the people of Kashmir knew it. It is, in fact a wonder that he lasted so long.

The second reality is that Burhan was not an ideologically committed militant, he was a young misled boy whose persona created in the social media got the better of him. He became cockier by the day, exposing himself in a manner that no professional guerilla would. He was, in short, a creation of the media and his death is also a media game being played out.

His killing by the security forces should, in fact, serve as a warning to the parents of young boys in Kashmir that they need to take responsibility to keep their sons away from the evil of foreign sponsored terrorism. The people of Kashmir should realise this immoral agenda and not allow it to fructify.

The government needs to launch a strong information campaign to counter the evil propaganda. The people, especially from a rural areas and a poor background, have to be informed and educated about the enemy design and told the consequences of their boys following a wrong path.

Media is a very important means for dealing with foreign sponsored propaganda. It is important for media to highlight the dangerous design of the enemy in creating the likes of Burhan Wani. It should expose the misinformation being spread and highlight the actual situation.

Burhan Wani represents all that the Kashmir youth should not be, this message needs to be given out loud and clear in order to save a generation from following a path of self destruction.