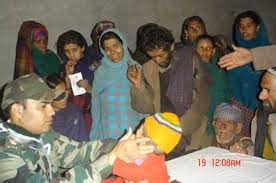 The Indian Army has reiterated its commitment to carry on with its welfare initiative in Jammu and Kashmir called Operation Sadbhavna. While a majority of people in the state would be rejoicing due to this good news, there would definitely be a small segment of anti-social, anti-national, divisive, disruptive, secessionist, anarchist and separatist elements who would be quite disappointed with the development.

These elements do not want to see the state progressing and the people happy because their relevance is dependent upon the people remaining deprived and frustrated. Their main effort is directed towards creating a wedge between the people and the army as dictated by their masters from across the border. Continuance of Sadbhavna, thus, constitutes a very big setback in their scheme of things.

In the early 1990’s, a climate of disruption and destruction caused by the cult of terrorism had taken its toll on the human psyche and the physical infrastructure in Jammu and Kashmir. The tragic reality of the times can be felt and understood only by the denizens of the region who have experienced this agony first hand.

During times of political and administrative turbulence the first to take a hit is the economy; Jammu and Kashmir was no exception. Both the economy and infrastructure of the state took a beating during the period when terrorism was on the ascendancy. More critical was the complete breakdown of the administrative machinery.

Very few people know or acknowledge that the only agency that consistently made an effort to stem this rot and pull the state out from the developmental coma was the Indian Army.

Understanding the hardships being faced by the population due to the lacunas in the administration and with the intention of restoring normalcy in the region, the Indian army initiated Operation Sadbhavna as early as the year 1991.

The intention was to offer a friendly helping hand to the population left wanting in terms of civic and social infrastructure due to no fault of theirs. Reconstructing the image of the security forces in the mind of the common man from the ogres that they had been painted into to the positive performers that they actually were was, no doubt, an additional goal.

Under the ambit of Sadbhavna, the Indian army initially buttressed the flailing social sector in the state.

To quote an example, Jammu and Kashmir is a state which has less than four teachers per government school. During the times of peak terrorism most of the government teachers preferred being posted at places that were close to their homes and easy to access. The result was that government schools in inaccessible areas were bereft of teachers. In many other places schools were burned down by the terrorists.

The Army, under Sadbhavna, opened a number of Army Goodwill Schools, especially so, in remote inaccessible regions with the intention of providing quality education to the deprived children. Employment was also generated for trained teachers

Ever since, Army Goodwill Schools have provided middle/high school level education to over one lakh students. Presently, over 14000 students are undergoing schooling in various army run schools in the state and over 1000 children are studying in institutions outside the state through scholarship programs facilitated by the army.

In Kashmir, the extreme cold conditions are referred to as Chilla-e-Kalan, which represents the harshest 40 days of winter in the Valley. The extreme cold conditions, during Chilla-e-Kalan and all through the winters, lead to general sickness and many emergency medical cases for which aid is not easily available. The army is sensitive to this problems faced by the people and has consistently buttressed the medical infrastructure in the state.

In the last three years only, the army has provided medical aid to approximately 3.68 lakh people and treated over 4.57 lakh animals in medical and veterinary camps held under Sadbhavna. Civilian authorities and people actively participate in these hugely popular camps.

Evacuation of medical emergencies by the army by helicopter, road and any other means available has saved thousands of lives in the state, especially in the Kashmir Valley.

Over 200 national integration tours have been conducted under Sadbhavna, wherein, more than 5000 beneficiaries (both students and elders) visited other states of the country and got a firsthand view of the culture of their fellow citizens and the growth trajectory of the nation. They came back motivated to become productive citizens of the country and actively leverage the growth trajectory for personal development.

Army, under Sadbhavna, is also committed to skill development of the youth and women of the state to further facilitate their employment. Army run vocational training centres and women empowerment centres spread across the state provide practical skills to interested and deserving candidates.

Sourced through Army’s own budget, people friendly projects to improve infrastructure like roads, bridges building of community halls etc have been executed year after year to ameliorate the conditions of people living in far flung regions of the state.

Sadbhavna projects are conceived after due consultation with the locals and implemented with local support. They are also integrated with the overall development plans of the government. The adage is to “help the people help themselves.”

The success of any goodwill initiative can be measured by its popularity, active participation and number of beneficiaries, which, in the case of Sadbhavna has very encouraging statics.

The local population, particularly those living in remote and physically disadvantaged areas, view the army as some kind of a panacea, an answer to all their problems. They approach the army for all kinds of help ranging from building of a road to providing a bridge to even helping in availing a loan from the civil administration. Sadbhavna provides the window through which this aid can be extended.

The decision of the Indian army to carry on with the noble initiative, Sadbhavana is welcomed and highly appreciated. Detractors of the social work should perhaps take a reality check by walking down the countryside and talking to the population at the grass-roots so that the propaganda managers of inimical forces are exposed.