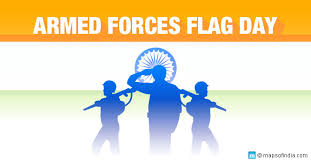 Armed Forces Flag Day is celebrated in India every year on December, 7. On this day, the citizens of the country get an opportunity to honour the soldiers, sailors and airmen (collectively termed as “soldiers”) of the country who sacrifice so much in pursuance of their sacred duty to protect the nation. A notable feature of this day is that it provides an opportunity to all citizens to contribute towards the well being of the veterans and the families of martyrs.

The country has, since independence, witnessed exhibition of the highest standards of bravery and dedication to the cause of the nation by its soldiers. There is not one person in the country who does not feel safe and secure because he has these soldiers guarding his country for him.

Courage and bravery beyond the call of duty has been consistently exhibited by our soldiers in times of war. The first challenge came in the form of a tribal invasion of Kashmir sponsored by Pakistan. The rapacious invasion would have well succeeded but for the bravery and courage of the Indian soldiers. This test of fire for the nascent Indian Army saved the region from coming under yet another colonial yolk

In 1962, China launched an unprovoked invasion into Indian territories. The war was fought with utmost bravery by the Indian troops despite being overwhelmed in both numbers and equipment. On 20 November 1962, a cease fire was declared and the Chinese withdrew from all the disputed areas. This happened mainly due to a realisation that the Indian troops, would not be a walk over once they were reinforced and refurbished.

Over the succeeding decades, China has not ventured to launch a similar misadventure, not because of lack of motivation, but because the country is wary of the Indian soldier and his capability.

In 1965, Pakistan had an edge in military capability and hence decided to launch an aggression. The plan was to infiltrate thousands of “raiders” into the Kashmir Valley to orchestrate a local revolt in what was termed as Operation Gibraltar. Simultaneously, the International border was to be breached to deny movement of reinforcements to Kashmir.

The end result was yet another bloody nose for Pakistan. The Battle of Asal Uttar proved to be a grave yard for their much vaunted Patton tanks and in Kashmir the local population supported the Army against the sham uprising that frittered out.

The Indo-Pakistan war of 1971 is heralded as one of the most convincing victories of the annals of military history. The liberation of Bangladesh after the abject surrender of Pakistani forces in East Pakistan, with almost 100,000 being taken as prisoners of war, speaks for itself.

In May 1999, Pakistani intrusion was identified in some sectors of Kargil. The Indian reaction was swift and ferocious. The brave Indian soldiers pounced upon the intruders. The battles of epic proportions culminated with Pakistan lamely announcing the withdrawal of its battered Northern Light Infantry formations when there was very little left to withdraw.

The Indian Army has incessantly been called upon to face the most brutal forms of foreign sponsored terrorism and insurgency in various parts of the country. Counter insurgency and counter terrorist operations of an unprecedented dimension have been witnessed in all affected regions. In the conduct of these operations, special effort is made to avoid collateral damage and loss of civilian lives, even at the cost of taking own casualties. In these areas, The Army also makes special efforts in the affected areas to ameliorate the suffering of the people who are living under deprived conditions due to the foreign sponsored unrest. It provides a life line through generation of employment, provision of medical facility and community/infrastructure development.

It is due to the operations being conducted at the cost of great sweat and blood that foreign sponsored terrorism has not succeeded in its objective of breaking the country’s intrinsic fabric.

It is a well known fact that the Army is the first to respond in all incidents of natural disasters. The spontaneous response of the Army serves as the greatest morale booster for the affected population apart from providing invaluable rescue, relief and rehabilitation.

Residing in metropolitan cities, one often forgets the relevance of the armed forces. Just pause and think, while newspapers are dedicating volumes to the cold wave where minimum temperature has gone to about 3-4 degree Celsius, the soldier in Siachen is surviving, at this very moment, in minus 50 degree Celsius.

The Indian soldier is an epitome of all that is the best in the country due to his demonstrated qualities of courage, self sacrifice, integrity, strength of character and commitment to the cause of the Nation. It is therefore, the bounden duty of the Nation to ensure that the blood spilled by the soldier as also his contribution to the national cause is given its due acknowledgement.

During the course of achieving victories in the various wars the nation has fought and in combating the ongoing cross-border terrorism and insurgency, our Armed Forces have lost and continue to lose valuable lives. The trauma that the family suffers on losing a near and dear one is hard to fathom. There are many soldiers who suffer grievous injuries in the call of duty and require care and rehabilitation so as to lead a life of dignity.

On December, 07, the Indian nationals get an opportunity to voluntarily contribute to the Armed Forces Flag Day Fund (AFFDF) and assist in the welfare of its soldiers. The fund is administered by the Kendriya Sainik Board and managed by a committee headed by the Union Defence Minister. The funds collected are utilised for the welfare of the veterans and the families of martyrs.

It is incumbent for every Indian to remember the soldier on the noble and holy occasion of Army Flag Day and contribute wholeheartedly to the AFFDF. It is not the money but the thought behind the act that is important.

(Jaibans Singh is a reputed defense analyst, author and commentator)