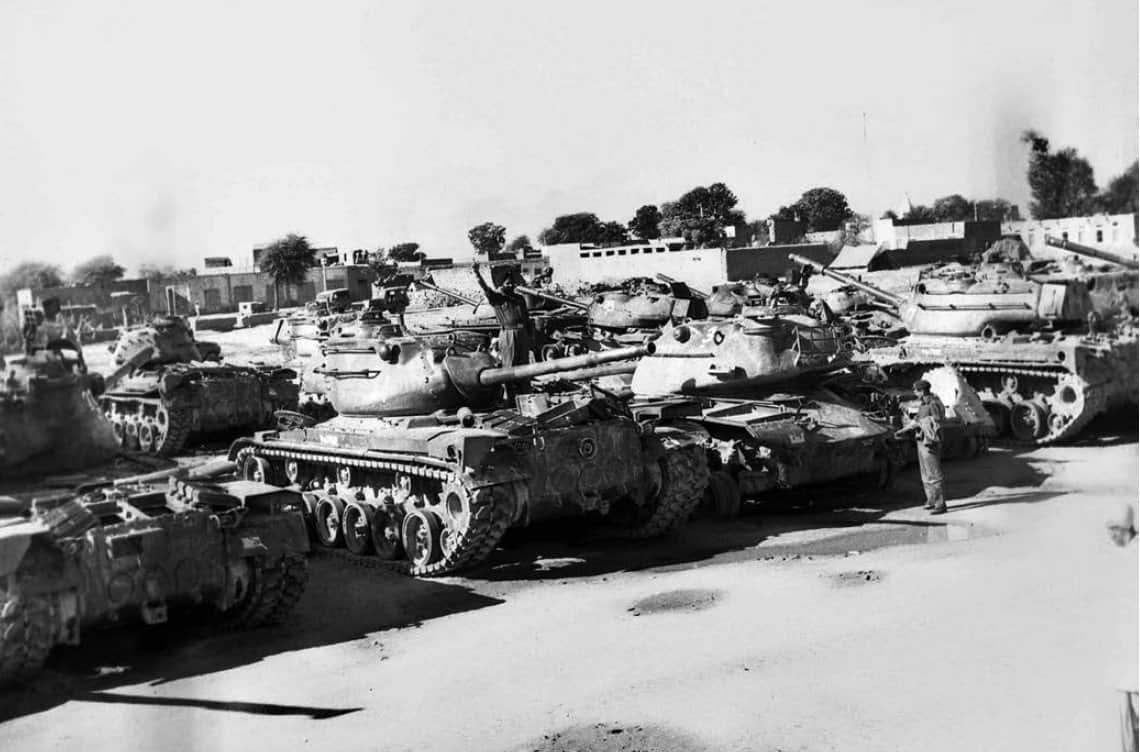 Flush with the acquisition of sophisticated military hardware from the United States of America, Pakistan, under the military dictatorship of General Ayub Khan (who styled himself as president of the country) launched a misadventure against India that culminated into a full-fledged war known in history as the Indo-Pakistan War-1965. The seventeen day war began with infiltration of mercenaries by Pakistan into the Indian state of Jammu and Kashmir under a covert operation code named “Gibraltar.” The action led to a full scale war fought that spilled over to the plains and witnessed the most intense tank battles fought in the world after World War II. The main among these were the Battle of Asal Uttar, Battle of Phillora, Battle of Burki and Battle of Chawinda

Among the foregoing, the Battle of Asal Uttar fought in the Khem Karan sector of Punjab from 8 September  to 10 September, 1965, is regarded as the war winning engagement for the Indian Army and the Indian nation.

The battle started with an offensive maneuver of the Pakistan army. The Pakistani 1 Armoured Division, with its brand new and state- of-the-art M-47 and M-48 (Patton) tanks and supported by 11 Infantry Division  thrust into India. It out-flanked the Indian township of  Khem Karan, located about five kms from the International border with Pakistan and moved north into the India plains.

On September 10, 1965, the Indian Army launched its riposte upon the advancing Pakistan tank columns with troops of 4 Mountain Division under Major General Gurbaksh Singh and a brigade level strength of three Armoured Regiments. Two Armoured Regiments were a part of 2 Independent Armoured Brigade whose one regiment was deployed in some other sector; the third Armoured Regiment was integral to 4 Infantry Division. The Armoured element was  under command of Brigadier Thomas K. Theograj .

The Indian Armoured Regiments were equipped with outdated American M4 Sherman tanks, AMX-13 light tanks of French origin and British-built Centurion Tanks. These tanks were technology wise no match for the 46-Ton Patton Tanks with their 90 mm main guns and sophisticated fire control systems as against the 75mm main guns of the Indian tanks. Pattons also had better speed and Armour protection.

The numbers were also vastly in favour of the Pakistanis who moved in with and Armoured Division tank strength of 300 tanks as compared to about 135 deployed by India with its three regiment having 45 tanks each. The comparative force ration was about 1:2.5 so far as Armour was concerned

The two forces faced each other at Asal Uttar, a village North east of Khem Karan that, if captured, would have opened for the enemy the axis to Amritsar to the north and Harike to the east.

The Indian formations set up a “U” shaped defensive position. The tanks were superbly camouflaged by tall un-harvested sugarcane stalks. In the night, the Indian troops flooded the sugar cane fields from where the Pakistani Armour was to advance.

The overconfident Pakistani Armour formation fell into the trap laid down by the Indian commanders. It was first hit by Indian artillery and then engaged by Indian tanks and anti-tank weapons of the infantry formation at ranges less than 500 metres. The swampy ground slowed down the advance of the Pakistani tanks and many of them could not move because of the muddy slush. The Indian Gunners were superbly trained while the Pakistanis were not even familiar with the new equipment;  Indians, therefore, were able to fire three rounds for each one fired by the Pakistanis. The smaller Indian tanks were able to penetrate the Pakistani Pattons from all angles and shortly set dozens on fire. The Pakistanis fled in disarray, leaving almost a hundred tanks behind.

99 Pakistani tanks, mostly Pattons, and a few Shermans and Chaffees, were destroyed or captured while the Indians lost only 10 tanks in the battle. The commander of Pakistani forces Maj. Gen. Nasir Ahmed Khan was killed in action. Despite the initial thrust of the Pakistani Army into Indian territory, the battle ended in a decisive victory for India.

The battle also witnessed the personal bravery of an Indian soldier, CQMH Abdul Hamid, who was honoured with the Param Vir Chakra, India’s highest military award, posthumously. It was awarded for knocking out seven enemy tanks with a recoilless gun.

This battle led to the creation of Patton Nagar (or “Patton City”) at the site of the combat. Here are kept the large number of Patton tanks fielded by the Pakistani forces that were either captured or destroyed there.

Had the Pakistan Army been successful in breaking out from the Indian defenses in Asal Uttar it would have hit open ground and would have been in a position to cut off the whole of the Indian Punjab west of the River Beas. It had further planned to encircle and destroy the Indian XI Corps by attacks from both flanks and the rear and capture of Amritsar. Pakistan then planned to march on to Delhi against little opposition from India.The plan failed miserably because the Pakistan army, though better equipped, was ill trained, de-motivated and badly led. Factors that contributed to Indian success were the fierce fighting ability of the troops, high morale, a better understanding of warfare in the plains, better coordination between all formations, excellent junior leadership, better tactics and a successful strategy.

Pakistan and particularly the Pakistan army wishes the world to believe that on this day Indian troops crossed the international border to launch an attack on Pakistani Punjab. The Pakistani narrative attempts to create a misinformation that the war was a result of an unprovoked surprise attack by India, which was repulsed by the Pakistan Army despite its smaller size and fewer armaments. The fact is that Pakistan Armed forces and especially Pakistan Army, with these celebrations, wishes to put a lid on its evilly orchestrated misadventure and subsequent ignoble defeat. The narrative has been criticised by Pakistani commentators as representing false history.