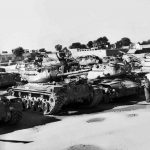 Jaibans Singh Flush with the acquisition of sophisticated military hardware from the United States of America, Pakistan, under the military dictatorship of General Ayub Khan (who styled himself as president of the country) launched a misadventure against India that culminated into a full-fledged war known in history as the Indo-Pakistan War-1965. The seventeen day war began … END_OF_DOCUMENT_TOKEN_TO_BE_REPLACED