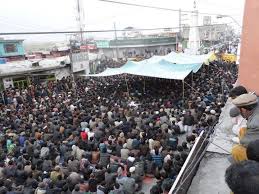 A change in the corridors of power in Islamabad is something that the deprived people of Gilgit-Baltistan dread. This is so because the resultant politics of witch-hunting negatively impact their already very difficult existence. Recently, wheat subsidy to Gilgit-Baltistan was withdrawn by the Nawaz Sharif led government, mainly out of pique, because the provincial government of Gilgit-Baltistan is of the opposition Pakistan People’s Party (PPP). That the people would face immense hardship is something that the present government has not considered at all!

This sadistic move by the government may well turn out to be a boon for the people since it brought in its wake a resistance movement of unprecedented proportions in the region that has been suppressed and subjugated for the last six plus decades. The Awami Action Committee (AAC); a recently constituted coalition of 20 odd political parties and religious groups took the initiative to spearhead the protest from April, 15, 2014 onwards.

The movement witnessed a hitherto unknown integration of the various communities for a common cause. People put aside their religious sentiments to sit together, march together and even pray together for their rights.

The lack of media attention was mainly due to constraints on the information spectrum of the region. This was overcome by massive proliferation in social media; the movement went viral on Twitter while other social media portals added to the efforts. Once again, social media played an important role in getting the people together for a justified common cause.

After twelve grueling and tension filled days the federal government of Pakistan had no option but to relent in the face of stiff and protracted protests by people who were ready to make any sacrifice for their cause. An agreement has been reached whereby wheat in Gilgit-Baltistan will be available for Rs 11 per Kg as against the earlier price set at Rs 14 per Kg.

Choudhary Muhammad Barjees Tahir, the federal minister for Kashmir Affairs and Gilgit-Baltistan, in a tongue in cheek statement said, “the federal government had decides to pay the annual subsidy on wheat to Gilgit-Baltistan keeping in view the special weather conditions and backwardness of the area.” Surely the government of Pakistan was well aware of the backwardness of the area and its climatic problems when it took the decision to withdraw the subsidy in the first case. The government should understand that such double standards do not go unnoticed anymore.

The people may have won a battle but the war for their freedom and rights looms ahead. The model created by this agitation will need to be further refined and strengthened to fight for the many other issues that plague the region. It is only befitting that the AAC has presented a nine-point charter of demands to the federal government and has given to it a 30 day period to respond. The more important issues include a halt in construction of the Daimer-Basha dam that will lead to massive inundation in Gilgit-Baltistan for the benefit of Pakistan Punjab and the taxation policy where people want the principle of “no taxation without representation” to be applied. The charter also includes other significant and critical issues like development, health care etc.

Another silver lining is that a nine member committee of the Senate led by Senator Afrasaib Khattak mandated to probe human rights issues in Gilgit-Baltistan has initiated its proceeding on April, 29, by visiting the region. The proceedings on the very first day indicate that the committee is not ready to mince its words when it comes to presenting facts about the dismal conditions prevailing over there. “What we have found out is that the powers lie in Islamabad through the Gilgit-Baltistan Council, which is headed by the Prime Minister and not the Gilgit-Baltistan Assembly,” said Senator Afrasaib Khattak in a news conference the very next day after getting to Gilgit. He made this statement on the presence of all members of the committee. “Even a peon cannot be appointed without permission from Islamabad,” he added for good measure. Such proceedings will greatly strength the hands of the AAC and the people in their just and righteous fight for their rights.

Even as events of such momentous proportion are taking place in Gilgit-Baltistan the reaction from the Indian side has, sadly, remained on the fringes of ignorance and unconcern. Somehow the realisation that these people are an integral part of the Indian nation and are suffering under foreign occupation does not seem to be sinking into the minds of the people, the political leadership and the media of the country.

It is understandable that the country is presently focused on the elections but then the existing public interactivity can be exploited to get across an even stronger message in support of Gilgit-Baltistan. Surely, all parties have a policy in relation to Pakistan Occupied Kashmir and Gilgit-Baltistan. It stands to logic that this be spelt out as a part of their election mandate. In fact, if the leaders had spoken in support of the people of Gilgit–Baltistan it would have had a positive impact on polling in Jammu and Kashmir also. What is more unfortunate is that this remote region, a forgotten Sangria-la, does not interest the Indian media because of a distinct lack of news value.

The herculean effort put in by the people of Gilgit-Baltistan to break the shackles of an oppressive regime demands strong support from India. We as a nation must celebrate the winds of change that are bring in their wake victory for the poor and the deprived people and do whatever is necessary to strengthen their efforts. The feeling should emanate from the state of Jammu and Kashmir of which Gilgit-Baltistan in an integral part and spread out across the country. The country’s leaders and media, in particular, must stand-up for the cause of the people and take their message across the international community. This is the least that we can do to for our fellow citizens.