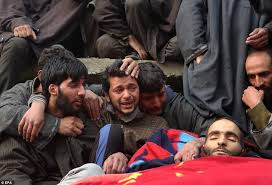 The sustained and incisive counter-terrorist operations conducted by the security forces in 2017 have not lost momentum in this year. While more than 200 terrorists were eliminated last year, the toll this year has already exceeded 50; the success has been further boosted with the elimination of top terrorist commanders like Sameer Tiger recently, and the gunning down of 13 terrorists in a single operation in beginning April. The security forces clearly have an upper hand in counter terrorism while terrorist initiated strikes are subdued.

Data suggests that more terrorists of local origin are joining the terrorist fold and consequently are being eliminated in the encounters. This implies that despite the pressure being exerted by security forces, the local youth are not relenting from joining the path of terrorism. Security forces have a policy in place where trapped local terrorists are given an option to surrender with assurance of their life being spared and further rehabilitation. In many cases parents and relatives are called upon to convince the terrorists. This apart, police attempts to engage the families of those who join the ranks of terrorism and joint appeals are sent for return to the mainstream.

The aforementioned is essentially a humanitarian gesture extended on the premise that those following the self-destructive path of violence do so because of professional indoctrination aided and abetted by foreign powers and they need to be given every opportunity to get back into the fold of civilized society. Sadly, many entrapped terrorists refuse to listen to their elders and choose the path of destruction.

It is quite apparent that security forces are doing their primary job of ridding the state of the scourge of terrorism and that too with utmost sensitivity to the humanitarian and human rights aspect. It is also notable that the success is being gained due to information provided by human intelligence sources, which implies that the common man is fed up with terrorist violence. He is ready to assist in the destruction of these propagators of violence so that he can pursue his life in peace.

It cannot be denied that Kashmir has a signature of terrorism, but it also needs to be remembered that the impact and influence of terrorism is far less now than what it was a few decades back when thousands of terrorists, mostly of foreign origin, were active and the death toll went into double figures on a daily basis. Kashmir has seen the worst and is now on the mend since security forces will never allow the debilitating environment of earlier times to revisit the state.

The situation can be further improved if the indoctrination of local youth is checked and this is primarily the responsibility of the people of the region, especially the political leadership.

The political leadership has to come forward to lead the movement for checking the flow of youth onto the misguided path of terrorism. They have to carry with them all other elements of society like the parents, elders, civil society, religious leaders etc. They have to invoke the ancient cultural roots of the region based on Kashmiriyat and Sufism to fend off the alien concept of Islam which calls for a mindless Jihad and violence.

The objective should be to expose to the masses the foreign hand which is responsible for the indoctrination of the youth through huge flow of funds and expert use of modern tools like social media. The government needs to come up with innovative ideas to isolate these influences and create a far stronger counter narrative. The centre needs to provide all assistance for this noble cause.

The foregoing is possible only if the politicians keep their petty quarrels behind and join hands to fight the common enemy. The trend of the party in opposition gleefully standing on the sides and watching the ruling segment being embarrassed with incessant disruption and divisiveness has to end. The ruling party or parties (as is mostly the case in Jammu and Kashmir) also need to reach out to the opposition and devise a common platform to save the youth from following a self destructive path.

Unity of purpose among the political class is not a new phenomenon in the state, right up to the late nineties there existed civility between leaders of different political parties and the larger cause of the state was kept above politics. Sullen and petty behavior, wherein, all energy is directed towards hurling of insinuations and abuses is a relatively new occurrence which needs to be nipped.

The government of the day should send its representatives (Ministers, MLAs and civil servants) from village to village and house to house to exhort the youth to focus on gainful pursuits of education, sports and culture which would facilitate a wholesome and lucrative career and long life for them as against the inevitable ignominious death that awaits terrorists.

Due protection and facility should be provided to members of the opposition, elders and volunteers from civil society to similarly go for mass contact to spread a message of peace and harmony.

Stringent action needs to be taken against those who exhort young boys to come out on the streets and pelt stones because it is here that the lure of terrorism takes roots. Religious places, religious teachers and media that is spreading hatred and radicalism needs to be identified and dismantled. Schools and education institutions need to run regularly so that students stay busy, maximum attentions needs to be given to sports and cultural activity.

An integrated effort is required to wean away Kashmiri youth gravitating towards terrorism. It is possible only if there is a will to move on the desired path. However, if the political objective is to keep the environment in a state of flux to garner petty political mileage, then not much change can be expected.

Security forces have done a tremendous job of checking terrorism and containing it within controllable limits. They have, as on many earlier occasions, provided the necessary environment for the political process to gain momentum. It now remains to be seen if the politicians stand up to be counted. An inability to do so would leave to the people with no option but to discard the present lot of leaders and look for new faces who better understand their aspirations.