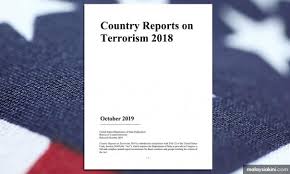 The United States of America (US) has released its annual “Country Reports on Terrorism” for the year 2018 on 22 November 2019. The report assesses all major nations of the world in terms of the fight against terrorism with special emphasis on compliance with international norms for countering terrorism. For each country there is an overview followed by listing of the number of terrorist incidents that have taken place, legislation, law enforcement and border security, countering the financing of terrorism, countering violent extremism and international and regional cooperation among others. The reports are not based as much on statics as on assessments.

In its foreword, the report identifies Iran as the “world’s worst state sponsor of terrorism.” Beyond this, one complete paragraph of the foreword is dedicated to Pakistan. The report openly admits that that India continued to experience terrorist attacks from Pakistan-based organisations. “Pakistan-based Lashkar-e-Tayyiba – which was responsible for the 2008 Mumbai attacks – and Jaish-e-Mohammad (JeM) maintained the capability and intent to attack Indian and Afghan targets,” it says. It specifically mentions the terrorist attack on the Sunjwan Military Camp in the Indian state of Jammu and Kashmir in February, 2018.

The foreword also indicts Pakistan for not doing enough to contain the Taliban and the Haqqani network that “Continued to launch lethal attacks throughout Afghanistan, including against U.S. military personnel.” With regard to the internal dimension, the foreword indicts the inability of the state to contain the Tehrik-e-Taliban Pakistan (TTP) that has continued to carry out attacks within Pakistan.

The main chapter of the report dedicated to Pakistan begins with a very serious indictment of Pakistan’s role in Afghanistan. It constitutes an elaboration of what is written in the foreword. “Although the Pakistani government voiced support for political reconciliation between the Afghan government and the Afghan Taliban, it did not restrict the Afghan Taliban and the Haqqani Network (HQN) from operating in Pakistan-based safe havens and threatening U.S. and Afghan forces in Afghanistan,” it states.

The report has identified the close relationship between the Pakistani state and such terror groups in Pakistan that are aligned against India. “The government (of Pakistan) failed to significantly limit Lashkar e-Tayyiba (LeT) and Jaish-e-Mohammad (JeM) from raising money, recruiting, and training in Pakistan,  and allowed candidates overtly affiliated with LeT front organizations to contest the July general elections,” says the report.

The report further lists out the trouble that  Pakistan  has been facing because of the many terror groups active there and the sensitive internal security situation in Provinces like Balochistan and Sindh. “Terrorists used a range of tactics to attack individuals, schools, markets, government institutions, and places of worship, including IEDs, VBIEDs, suicide bombings, targeted assassinations, and rocket-propelled grenades,” it states.

The report quite openly blames the Government of Pakistan of inability to contain this proliferation of terror.  The reason attributed is the “inconsistency” of the state apparatus (read Pakistan Army) to eliminate safe havens in the country, “Authorities did not take sufficient action to stop certain terrorist groups and individuals from openly operating in the country.” On the issue of terror financing too, the report comes down heavily on Pakistan, in a rather blunt statement it says that Pakistan criminalises terrorist financing through the Anti-terrorism Act, but implementation remains uneven. The inability of the Government of Pakistan to register and monitor all Madrassas that are engaged in imparting fundamentalist Islamic education to children has also been mentioned in the report.

In the India segment the report identifies India as a victim of Pakistan sponsored terrorism. “The parts of India most seriously impacted by terrorism in 2018 included the state of Jammu and Kashmir, the northeast Indian states, and parts of central India in which Maoist terrorists remain active,” it states.

The report is very appreciative of the successful efforts put in by India to detect, disrupt, and degrade terrorist organizations’ operations within its border. “Indian leadership expressed resolve to prevent terrorist attacks domestically and to bring to justice the perpetrators of terrorism, in cooperation with the United States and other like-minded countries,” the report says.

The many initiatives taken by India and the US in counter-terrorism cooperation in terms of Joint Working Group, 2+2 (top U.S. and Indian diplomatic and military officials), Ministerial Dialogue for increased information sharing found special mention in the report.

The severe indictment of Pakistan in the US Country Reports on Terrorism, when seen along with its precarious position with the FATF, the country in a very precarious position. It is notable here that FATF, which is a global terror financing watchdog, has consistently put Pakistan in its grey list since the country has failed to deliver on 22 out of 27 targets related to terror financing.

Pakistan is continuing with a blinkered approach, not realising that what it could get away with earlier is no longer feasible. The country simply has to stop justifying its inimical interference in Kashmir by terming it as an internal problem of India. The world is no longer convinced by the line of thought. It also has to clean out the mess within by coming down heavily on fundamentalist Islamic forces that are playing havoc in the country’s neighbourhood, especially India and Afghanistan. It has also failed to meet global requirements on curbing terror funding. Finally, the country has to address the open revolts in its provinces like Balochistan where untold atrocities are being perpetrated on innocent civilians by Government forces and militants alike.

The US Country Reports on Terrorism leaves no doubt about the international appreciation for Indian efforts to fight the menace of terrorism and the concern that the international community feels with regard to the critical situation in Pakistan.  Sadly, Pakistan is refusing to accept its own shortcomings and is hell bent upon putting the entire blame on India, which is totally unacceptable.